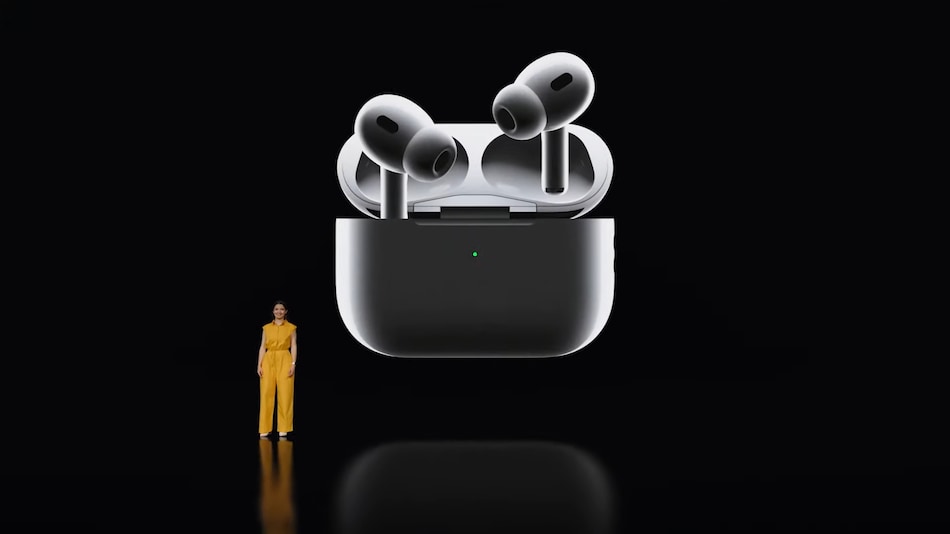 Apple at its ‘Far Out' event on Wednesday launched its second-generation AirPods Pro, or the AirPods Pro (2nd Generation). Like the company's first generation high-end truly wireless stereo (TWS) earphones that made their debut in 2019, the new AirPods Pro 2 come with an inbuilt speaker with Find My support. The AirPods Pro (2nd Generation) are equipped with a new Apple H2 chip that the company says offers improved noise cancellation and support for Personalised Spatial Audio. The earphones offer up to 6 hours of battery life, and an additional 30 hours with the charging case. They also support wireless charging, along with support for Apple's MagSafe, according to the company.

Apple AirPods Pro (2nd Generation) price is set at $249 (roughly Rs. 19,850). In India, it is priced at Rs. 26,900. The company's latest TWS earphones will be available for orders Apple's online store starting September 9 and customers can purchase them from September 23.

The successor to the first-generation AirPods Pro that were launched in 2019 is powered by an Apple H2 chip. The new earphones offer support for Dolby Atmos and Personalised Spatial Audio with head tracking, which can be customised by a user, according to Apple. The AirPods Pro (2nd generation) feature a custom high-excursion driver with improved audio quality, along with a force sensor for pressure controls located along the earphones' stems.

They are claimed to offer up to double the Active Noise Cancellation (ANC) functionality as compared to the previous generation AirPods Pro. There also an Adaptive Transparency Mode and each AirPod is capable of individually playing a sound, along with U1 chip for precise tracking via Find My built into the charging case. There is also a speaker on the case to allow users to find the audio device.

On the connectivity front, the new AirPods Pro (2nd Generation) feature Bluetooth 5.3 connectivity, according to the Cupertino firm. They will also feature support for skin-detection via a sensor, to identify when the earbuds are in a user's ear to automatically start or stop media playback, along with a motion-detecting accelerometer, and a speech-detecting accelerometer. The earbuds and charging case have an IPX4 rating for sweat and water resistance.

Apple says that the AirPods Pro (2nd Generation) offer up to 6 hours (33 percent extra) of listening time compared to their predecessor. Users can get up to 30 hours of battery life, which is an increase of 6 hours, with a full charge. The earphones can be charged via a Lightning cable, wirelessly with Qi-certified chargers, and with Apple's proprietary MagSafe charging protocol, according to the company. The earphones measure 30.9x21.8x24mm and weigh 5.3 grams, while the case measures 45.2x60.6x21.7mm and weighs 50.8 grams, according to Apple.