You can use Bluetooth or USB to connect to a source device. 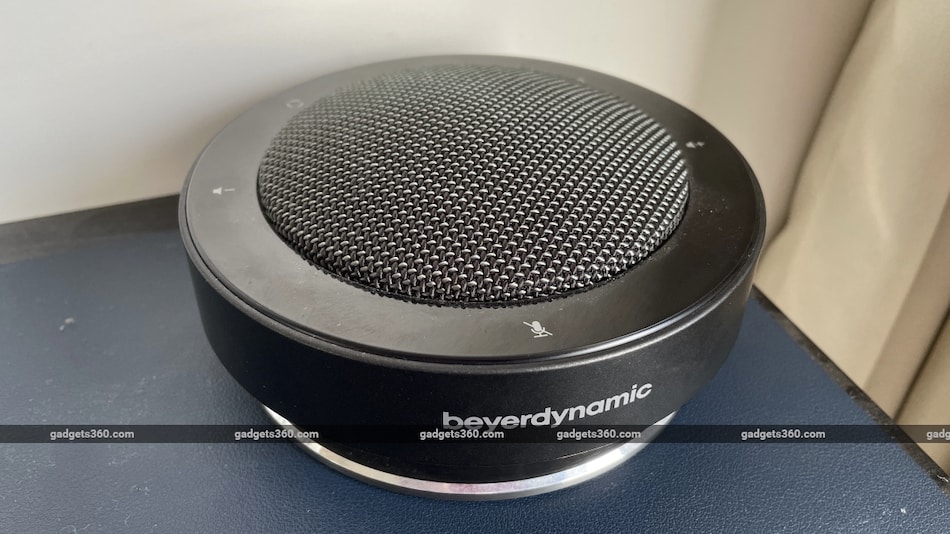 The Beyerdynamic Phonum is priced at around Rs. 25,000 in India

Bluetooth speakers are usually made for listening to music with, but you can also use them as hands-free speakerphones for calls when connected to your smartphone or computer. Interestingly, the wireless speaker I'm reviewing here works quite differently to mainstream options, in that it isn't focused on the music listening experience at all. The Beyerdynamic Phonum is a wireless speakerphone made specifically for voice communications – whether phone calls or Internet-based audio and video conferencing – and connects to a source device using either Bluetooth or a wired USB connection.

Priced at around Rs. 25,000 in India, the Beyerdynamic Phonum is an expensive but purpose-built speaker designed to let you take calls without taking your hands off your keyboard. It's meant to be used for work calls, whether you're at home or at the office, and works equally well with a smartphone or computer. Is this interesting wireless speaker worth the price? Find out in this review.

Most mainstream wireless speakers are designed with portability and weather resistance in mind, so the Beyerdynamic Phonum stands out for its subtle and sophisticated look. The round body has a flat, grippy base, with a narrower section just above that you can use to wrap the cable around. The grille faces upwards, although the speaker fires downwards, and the touch controls are all around it. The physical power switch and USB Type-C port for charging are at the back.

Using the Beyerdynamic Phonum is easy enough; it pairs to a source device using Bluetooth, and activates its on-device controls when in use, depending on whether it's in standby or active. You can also connect it to a computer using the included USB Type-C to Type-A cable, which sets up a wired connection between the two and also charges the battery of the Phonum.

The Beyerdynamic Phonum uses the company's Gecko microphone technology, which has three modes of voice tracking and can detect voices coming from any direction around the speaker. You can cycle through the modes when in use, and choose the one that suits the purpose best. Fix mode tracks a single speaker in a fixed location; Follow mode directs the tracking at the active speaker in a group; and 360 mode picks up voices from all directions.

The speaker has a 2-inch down-firing driver, a frequency response range of 120-10,000Hz, automatic echo and noise cancellation for the microphone, and Bluetooth 4.2 for connectivity. There is a 2,600mAh battery in the Beyerdynamic Phonum, which ran for around nine hours when playing audio continuously. When used as a speakerphone system, I was able to get around 16-17 hours of battery life in total, switching between standby mode, taking some phone calls, and occasionally playing music.

There are touch controls at the top of the Beyerdynamic Phonum

Unlike most of the wireless speakers I've reviewed, the Beyerdynamic Phonum is firmly focused on the experience with voice calls. While I did use this speaker for occasional music listening, I largely had it connected to my iPhone and on standby during the work day, placing and receiving phone calls as and when needed. I also used it with my MacBook Air for Zoom conference calls on a few occasions.

The tuning of the Beyerdynamic Phonum is, expectedly, suited for voice. Output was sharp and precise, and the voices were loud and distinct enough to be clearly heard from up to 3m away in a quiet room. Furthermore, connectivity was stable as long as the phone remained within around 3m of the speaker.

I found it particularly easy to use the controls; I could glance at my smartphone to see who was calling, and quickly tap the call answer button on the Beyerdynamic Phonum to pick up without interrupting my workflow at my home office desk. Adjusting the volume was also easy, although I didn't often need to do this in a quiet room, and only bumped it up if I also wanted someone else in the room to hear what was being said.

The Beyerdynamic Phonum has the company's Gecko omnidirectional microphone system

The Gecko microphone system is every bit as good as it sounds, and was able to pick up my voice precisely from within around 60cm from the speaker. Environmental noise cancellation and echo cancellation also worked well to ensure that my voice was picked up clearly. While callers reported that it did sound as though I was speaking on a hands-free device due to the perception of distance between the person speaking and the microphone, my voice was nonetheless clear. Calls were not affected by the typical clarity issues that people face when using hands-free devices.

Music isn't the ideal use case for the Beyerdynamic Phonum, and as indicated by its frequency response range and voice-focused tuning, audio tracks sounded a bit awkward on this speaker. The highs were entirely out of place, and the sub-bass couldn't really be heard. It might work for some vocal-centric tracks, but in general, the Phonum is best avoided for music listening.

Wired connectivity naturally sounded a lot better than Bluetooth on the Beyerdynamic Phonum, offering a more stable and clean sound experience than simply using my laptop's own speakers. When plugged into my MacBook Air, the Phonum was detected automatically, and MacOS offered two equaliser modes through its sound settings – Voice and Music – which worked as I expected to optimise the equaliser for these purposes. The Voice mode gave the mids a reasonable push.

Increased dependence on working from home has made for some interesting innovations in the gadget space, and the Beyerdynamic Phonum is one such device. It's pitched as a speakerphone for calls, and does that very well whether connected using Bluetooth or a USB cable. It could also come in handy in a conference room, where its excellent Gecko microphone system can optimise voice pickup from any direction.

Although expensive at around Rs. 25,000, this speakerphone puts Beyerdynamic's expertise to good use. It doesn't sound too good with music, but that really isn't what the Phonum is made for; stick to its core functionality and you'll quickly grow fond of it, as I have.