The iGear Evoke has a solar charging panel as well as a micro-USB port for wired charging. 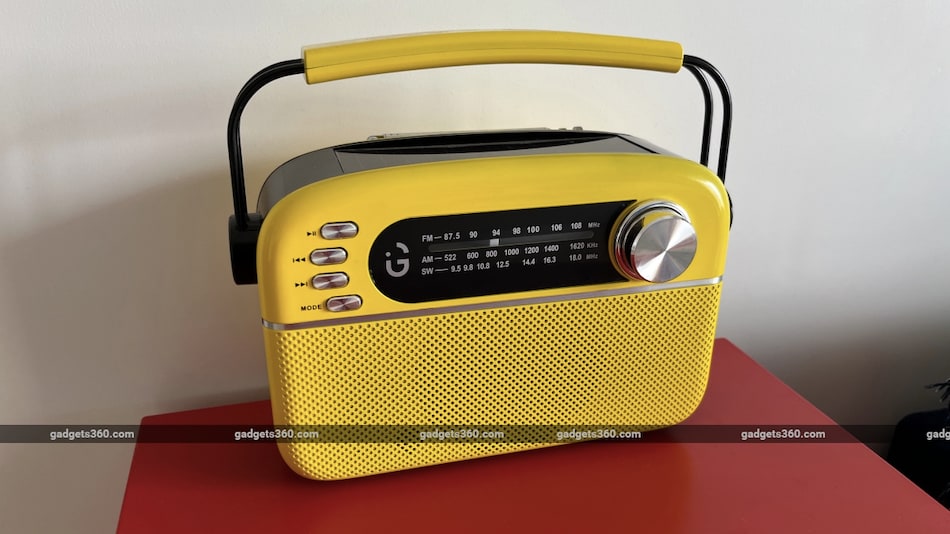 The iGear Evoke speaker is priced at Rs. 3,000 in India

Affordable portable speakers tend to be compact and easy to carry, with a strong focus on usability, but there are some that stand out. One such product is the iGear Evoke, a portable speaker that is quite different from others in its price range, for a number of reasons. At first glance, you might think that this is an old radio set from the past or even a Saregama Carvaan knock-off, but this device packs in modern features and connectivity options that keep it relevant in the current era of wireless audio streaming.

With unique retro styling, a radio tuner, multiple connectivity options, and the ability to charge using sunlight, the iGear Evoke promises a lot for its asking price of just Rs. 3,000. Is this the best low-cost portable speaker you can buy right now? Find out in this review.

Solar charging on the iGear Evoke is slow, but does mean that the speaker can power itself

Solar and micro-USB charging on the iGear Evoke speaker

The iGear Evoke bears a strong resemblance to the Saregama Carvaan series of portable music players, which itself draws inspiration from the radio sets of the past. Styling aside, the device is even more eye-catching because of its colour options; the yellow unit sent to me is particularly bright and conspicuous, but blue and white colour options are available.

The unit has a folding handle at the top for easy carrying, with the speaker driver facing forwards. The controls and ports are on the front and right side of the iGear Evoke. The front has a dial to set the AM/FM/SW radio frequency, along with four buttons to control playback and the mode of connectivity (when using Bluetooth or digital storage media).

The side of the speaker has switches for choosing the source (radio or digital media), a USB port, a microSD card slot, an auxiliary socket for 3.5mm connectivity, and a Micro-USB port for wired charging. There is also a dial that controls the power and volume. An initial twist turns the speaker on with an audible click, and continuing to turn it increases or decreases the volume. The speaker is large and all the controls fit quite comfortably and work well, without the iGear Evoke feeling too crowded or difficult to operate.

On the top of the iGear Evoke is the solar panel, which allows the speaker to charge on its own as long as it is exposed to sunlight. There is also a telescopic antenna which can be extended to improve the radio signal quality.

A tuning dial lets you adjust and set the radio frequency, while buttons at the front control digital audio playback

Solar charging means that users potentially don't need to plug the speaker into a wired charger at all, but this will of course depend on your usage. Although the company doesn't talk about charging time for the iGear Evoke, solar charging is considerably slower than wired charging and can take many hours, or even days, to fully fill the speaker's battery. You might have to rely on USB charging at times. This is however still a useful feature to have if you've taken the Evoke, say, on a camping trip and don't have access to a power outlet.

The iGear Evoke has a 1,200mAh battery, and usefully can be used to charge other devices by connecting a USB cable and turning it on. This means you can use the device as a solar-charging power bank for emergencies, although this would be quite slow. Apart from this, the speaker has a rated sound output of 5W. You can use Bluetooth 5, FM/AM/SW radio, the USB port, microSD card slot, and 3.5mm auxiliary input to play audio. The sales package includes a wall adapter and charging cable to charge the speaker.

Battery life on the iGear Evoke will vary based on your media source and also usage conditions, since it's always able to charge itself using its solar panel even when in use. That said, using it will drain the battery much quicker than it can recharge itself, and I was able to use the speaker for around 10 hours when connected to Bluetooth and playing music at moderate volumes before the battery ran out.

Lots of connectivity options, but unsatisfactory sound quality on the iGear Evoke

While the iGear Evoke is unique in many ways, the speaker falls short of expectations when it comes to sound quality. The sound tended to be acceptable or below average depending on the music source, but even at its best, the sound had its weaknesses. That said, I didn't find it unpleasant for casual listening at home – it seemed like a warm, fuzzy sound that matched the retro look of this speaker.

There are plenty of connectivity options on the iGear Evoke, including Bluetooth, FM and AM radio, and media playback from local storage devices

FM radio sounded considerably less refined and clean compared to music streamed digitally via Bluetooth or MP3 files played from local storage media. I noticed lots of crackling and distortion in the radio reception even with the antenna fully extended in an open area and the volume at moderate levels. Bluetooth and audio played from a USB drive naturally sounded a lot cleaner, but the sound was still dull and lacking in excitement and detail.

Although there is a dial for tuning radio frequencies, the iGear Evoke manages to lock onto stations automatically without much effort. When using digital connectivity, the four physical buttons on the front can be used to control music. A small display might have been useful to show the track being played and other information such as the battery level, but I wouldn't hold the absence of this against the iGear Evoke at this price.

Listening to Boom by Tiesto with the speaker connected to my smartphone using Bluetooth, the strong beat of the track sounded less like bass and more like popping sounds. The track had a strange feeling of roughness, and many other bass-heavy tracks also sounded muddy and awkward. With the house classic So Right by Jetlag and Axwell, it felt as though a thick quilt had been placed over the speaker, making a muffled mess of this otherwise lively track.

Even with the volume at moderate levels for music played from a USB drive, the highs sounded a bit shrill and excessive, vocals felt muffled, and there were strange volume spikes that quickly caused listener fatigue. All along, there was barely any detail to be heard in any of the tracks I tried. For all of its connectivity options and features, unfortunately the iGear Evoke just does not deliver good sound quality.

There are many affordable wireless speakers offering decent features, but the iGear Evoke stands out for a couple of key reasons – its retro design and ability to charge itself using solar energy. It also helps that the speaker can be used to charge other gadgets, and it offers a variety of connectivity options. The only real drawback here, which unfortunately is a critical one, is sound quality.

There's no delicate way to put this: the iGear Evoke falls far short of the competition when it comes to sound quality, with dull, muddy performance across sources. It might be worth considering this speaker anyway if you just want a simple device for casual listening, or if you find the solar charging and radio connectivity useful. If you want to enjoy your music though, the Rs. 2,499 Mi Portable Bluetooth Speaker (16W) is much louder and performs considerably better.