Is this the best affordable soundbar you can buy in India right now? 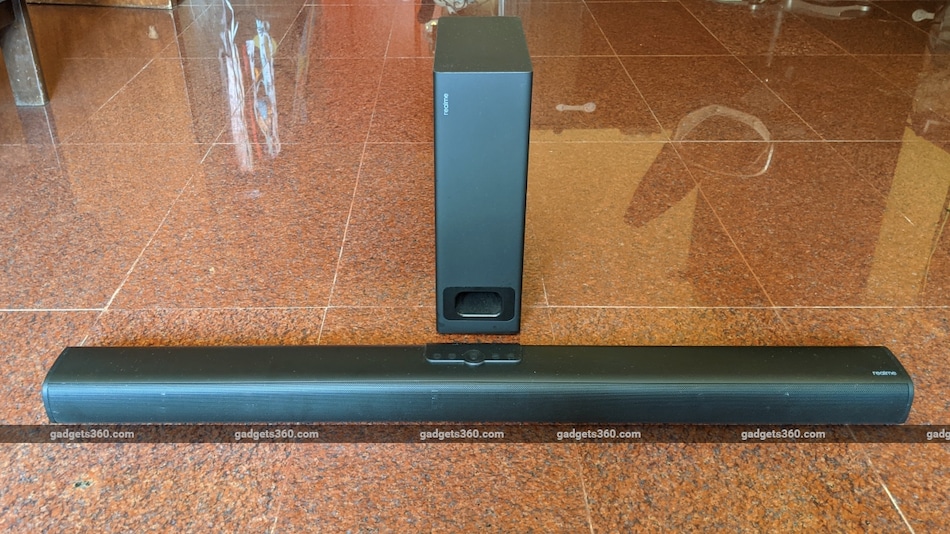 The soundbar is a pretty genius product concept, offering many of the benefits of a full-fledged home theatre system while avoiding the complications of installing a multi-speaker setup. However, soundbars can be rather expensive, often costing as much or even more than the televisions people want to use them with. Budget soundbars do exist, but options such as the Mi Soundbar are perhaps too basic, and may not offer a significant improvement in sound over your TV's built in speakers.

There's a significant gap here, with the budget soundbar space dominated by small brands offering products that are really just large speakers. Recognising this gap, Realme recently launched its first soundbar in India. Priced at Rs. 6,999, the Realme 100W Soundbar has, as the name states, a rated sound output of 100W, with a dedicated subwoofer to go with the bar. Is this budget option worth the price? Find out in our review.

The Realme 100W Soundbar is available in just one colour - black

While there are many options in the budget soundbar segment, The Realme 100W Soundbar stands out for one big reason: it has a dedicated subwoofer. It's a simple wired unit, which plugs into the main bar and draws power directly from it. This means that while you'll have to deal with some limitations in positioning and installation, you don't need a separate power outlet for the subwoofer, as is the case with soundbars that have wireless subwoofers.

The Realme soundbar also has a significantly higher rated power output than what most affordable televisions these days offer. If your television puts out around 20-30W of sound, the Realme 100W Soundbar will offer a significant volume boost with its 100W rating. It's worth pointing out here that the bar itself has a rated output of 60W, while the subwoofer accounts for the other 40W, so it isn't quite as loud (even on paper) as the number might have you believe. The bar unit consists of two full-range drivers and two tweeters.

From a distance, the Realme Soundbar looks simple and unassuming, but there are some elements that come across as a bit strange. The indicator lights that shine through the metal front grille of the bar speaker are rather glaring and distracting, and the colours and codes don't intuitively tell you anything worth knowing. The buttons also feel a bit flimsy and tacky. The device is available only in black for now.

I had the Realme 100W Soundbar placed on a table with the subwoofer on the floor right next to it, but you do have the option to wall-mount the bar using the grooves to fix it onto hooks. Installation isn't included with the purchase, so this is something you'll have to get done yourself. If you're placing the bar on a table, you'll just have to plug the components in.

The remote has buttons to quickly switch between sources, apart from controlling the volume and power

The remote of the Realme 100W Soundbar feels a bit tacky as well, but it's entirely functional and quite useful. There are individual source buttons, audio mode selection buttons, and basic controls for volume and playback as well. The remote is powered by two AAA batteries, which are included in the box. Of course, you can just use the buttons on the bar speaker itself if you prefer.

Connectivity options on the Realme 100W Soundbar are impressive for a budget option, with the device supporting HDMI ARC, coaxial S/PDIF, optical Toslink, USB, a 3.5mm stereo jack, and Bluetooth 5. Included in the sales package are HDMI and coaxial cables, which are useful and a pleasant surprise given the price of the soundbar. Setup is easy enough; you just need to switch to the right source to use the soundbar, and Bluetooth pairing was easy as well.

What I found quite bothersome were the voice prompts from the Realme soundbar. Every time the device is powered on or off, or switched between sources, a loud voice prompt announces the status or source name. This was unpleasantly loud, especially when watching TV at night, and generally annoying even at other times. There's no way to switch this intrusive feature off, so you'll just have to get used to it if you buy the Realme 100W Soundbar.

The buttons on the Realme 100W Soundbar look a bit tacky

While ultra-budget options such as the Mi Soundbar don't offer much more than a slight volume boost, Realme's entry into the segment is an affordable option that offers significant benefits over your television's built in audio. The Realme 100W Soundbar is loud, and offers a sound that is much more cinematic and full than what most affordable televisions can produce.

I usually recommend soundbars based on the television they will be used with, and the Realme 100W Soundbar is best paired with any entry-level television. I used it with a couple of 55-inch 4K TVs that I had for review alongside, but this soundbar would be ideally used with televisions up to 43 inches in screen size based on its dimensions and rated sound output, apart from the price itself. Plenty of connectivity options means any lack of ports or features on a particular TV shouldn't hamper your ability to plug the soundbar in.

The lights at the front are quite distracting and glaring, and don't tell you anything particularly useful either

While I used HDMI ARC on one of the TVs I was reviewing, the second was missing HDMI ARC as well as a coaxial audio output. I had to therefore rely on an Optical Toslink cable I had at home, but this was easy to set up as well. I used the Realme soundbar with a variety of content, including movies, TV shows, and children's cartoons. While the volume was usually turned down to reasonable levels with the latter two types of content, I bumped it up while watching The Midnight Sky on Netflix.

With the volume up, the Realme 100W Soundbar did a decent job of capturing the sombre mood of the movie, particularly the rumbling lows of the machinery at both the arctic research station and in the spacecraft. A lot of this can be credited to the subwoofer, which while small and narrow, is quite impressive. Although it occasionally felt a bit much, the system usually got the levels right across the frequency range.

I also found the mid-range tuning to be decent. Dialogue and voices were clear, sharp, and loud enough to not be drowned out by the powerful low-end. The volume bump and ability to handle those loud volumes capably and without much distortion or struggle is the defining characteristic of the Realme 100W Soundbar, and that's exactly what would be expected from a device in this price range.

With music, particularly background scores in movies and TV shows, the Realme 100W Soundbar does a reasonable job without overwhelming the dialogue and core sound effects. At low volumes across content, the soundbar didn't deliver sound quality beyond what the televisions it was used with could manage on their own, but the sound did feel a bit clearer with dialogue and vocals in music. The wide positioning of the drivers does help make for a decent soundstage, although it's far from the quality and spaciousness you'd get with more expensive offerings such as the evergreen JBL SB250.

With music, which I played using Bluetooth from an Android smartphone, the soundbar was decent as well. Once again, the defining characteristics in the sound were the ability to handle louder volumes, as well as the wide soundstage. Although the tuning isn't ideal for music, the Realme soundbar works for occasional listening at home if you want to bump up the volume a bit.

Like many of Realme's first attempts at new product segments, the Realme 100W Soundbar is largely a good product that deserves a bit more recognition. It's inexpensive, well-equipped, and offers exactly what you'd expect from a budget soundbar: loud, clean sound.

That said, there are some areas in which the Realme 100W Soundbar fell a bit short. The design was a bit odd in places, the voice prompts never failed to annoy me, and performance at low volumes was barely any different from just using the speakers on any TV. However, at Rs. 6,999, these are relatively minor quirks that are more than made up for by good tuning and performance at higher volumes.

All in all, for Rs. 6,999, this is a soundbar worth considering. There isn't much competition to the Realme 100W Soundbar at this price, but it might be worth looking at entry-level options from brands such as Philips, JBL, and Blaupunkt, if you can bump your budget up to around Rs. 10,000.