The LDAC Bluetooth codec is supported on the Sony WF-1000XM4. 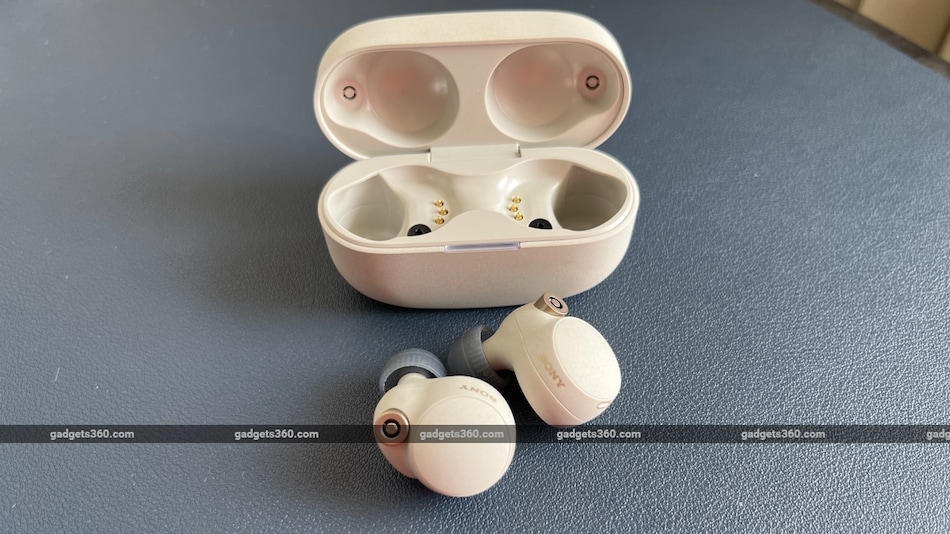 Sony is among the world's leading brands when it comes to personal audio, and has regularly produced high-quality wireless headphones, earphones, and true wireless earphones. The company has also developed the LDAC Bluetooth codec, which allows for a high rate of data transfer over Bluetooth for better audio quality with high-resolution audio streams and files. The latest product from Sony combines all of its expertise in this field; the WF-1000XM4 true wireless earphones promise flagship-grade sound quality, along with other key features.

Priced at Rs. 19,990, the Sony WF-1000XM4 is the successor to the WF-1000XM3, and promises an even more capable and feature-filled listening experience. Apart from active noise cancellation, mobile app support, and wireless charging, the WF-1000XM4 supports the LDAC Bluetooth codec which promises better sound quality with compatible source devices. Is this the best pair of true wireless earphones you can buy right now? Find out in this review.

The Sony WF-1000XM4 supports the SBC and AAC codecs, in addition to LDAC

Some flagship true wireless earphones such as the Sennheiser Momentum True Wireless 2 and Sony WF-1000XM3 are considerably larger than most affordable and mid-range options, and the Sony WF-1000XM4 is a similarly large pair. One of the reasons for this is the Sony V1 integrated processor, which powers the active noise cancellation and LDAC Bluetooth codec support.

Although a bit smaller than the XM3, the XM4 earpieces are quite large. They remain anchored in place in your ears with the help of silicone ear tips alone. The earpieces stuck out of my ears somewhat precariously, and tended to move around slightly with everyday use, particularly when I was walking. However, noise isolation remained good enough to ensure effective active noise cancellation, and I didn't have any issues with comfort or the ability to use these earphones for long stretches.

The earpieces of the Sony WF-1000XM4 are built from plastic, but have a nice finish and there's a small metal accent on each one that houses one of the outer microphones. The second outer microphone is on the top of each earpiece, and a third microphone is placed inside to assist with ANC. The rounded portion on the outer side of the earpieces is touch-sensitive for the customisable controls, and the insides have proximity sensors that detect when they are worn or taken off in order to automatically play and pause music or power them down when not in use.

The Sony WF-1000XM4 earpieces are rated IPX4 for water resistance. My review unit came in an ‘eco-friendly' recyclable package. I found three pairs of foam ear tips in the package, but Sony has confirmed that units sold in India will have three pairs of silicone ear tips instead in the box, which is a bit disappointing given that foam tips usually offer a better noise isolating fit. A single pair of silicone ear tips was provided to me separately by Sony for this review, to match the experience buyers will have.

Touch controls on the Sony WF-1000XM4 are customisable through the Sony Headphones Connect app, although this is limited to function sets rather than allowing users to choose individual gestures and functions. The sets are assigned to each earpiece separately, and can be swapped depending on your preferences. There's a set for Ambient Sound Control which cycles between active noise cancellation and hear-through modes with single-taps, and Quick Attention mode with a continuous press. A second set enables playback and voice assistant controls, and finally, the third set gives you volume controls.

I had Ambient Sound Control active on the left earpiece and playback controls on the right one, but the need to choose two of the three sets was a bit disappointing. I would have liked to have also been able to control the volume directly from the headset.

The charging case of the Sony WF-1000XM4 matches the colour and texture of the earpieces. It isn't too large which makes it pocketable and easy to carry around. There is a USB Type-C port at the back for charging, and a status indicator light on the front, just under the lid. The charging case also supports Qi wireless charging.

The earpieces of the Sony WF-1000XM4 have 6mm dynamic drivers which support a frequency response range of 20-40,000Hz and streaming bitrate of up to 990kbps with the LDAC codec (20-20,000Hz frequency range with other codecs). For connectivity, the earphones use Bluetooth 5.2, with support for the SBC, AAC, and LDAC Bluetooth codecs. There's also support for Google Fast Pair, enabling quick pairing with Android smartphones by linking the headset to a Google account.

Sony's Headphones Connect serves as the companion app for the WF-1000XM4 earphones, letting you customise the controls, change equaliser settings, and check the battery levels of the earpieces and charging case. You can also tweak other things such as 360 Reality Audio settings, speak-to-chat, DSEE audio mode, voice assistant preferences, auto power-off, and more.

You can set the earphones to prioritise sound quality over connection stability or vice-versa, depending on your usage preferences. On the whole, this is an excellent app that allows plenty of control over the earphones and its features, apart from pushing firmware updates to the headset as and when they become available.

The Sony WF-1000XM4 has touch controls, which can be customised through the Sony Headphones Connect app

Battery life on the Sony WF-1000XM4 isn't exceptional, but is decent enough given its features and specifications. I was able to use the earpieces for around six hours on a single charge (Sony claims eight hours) with mixed usage, which involved listening to music and audiobooks as well as taking calls, with active noise cancellation usually on. The charging case added two full charges for the earpieces, for a total battery life of around 18 hours per charge cycle. It's possible to fully charge the case safely with a 10W charger in around 90 minutes, and wireless charging naturally takes longer.

Good sound quality and ANC on the Sony WF-1000XM4

Sony's over-ear headphones such as the WH-1000XM4 have been class-leading for some time, but the company's true wireless range hasn't been quite as impressive in the premium segment as competitors from Apple and Samsung. The WF-1000XM4 represents a big change in that trend, and puts Sony firmly in competition among the best in the true wireless audio segment.

The key point that makes the Sony WF-1000XM4 special is its support for the LDAC Bluetooth codec, which is a rare specification for true wireless earphones. Furthermore, Sony has ironed out a lot of the issues that older products have had with connection stability, making the use of LDAC as seamless and natural as the much more stable AAC codec, even over long distances. This meant that there was a small but noticeable improvement in sound quality when using the earphones with an Android smartphone compared to an iPhone.

Listening to Hold On (Sub Focus Remix) by Rusko on Apple Music with the LDAC codec at 990kbps, I was immediately impressed with the sound quality on offer. The sonic signature of the earphones is geared around the typical listening profile of an everyday consumer, so it's well tuned for this aggressive dubstep track. This made for a distinct bias towards low frequencies, which translated into a tight and aggressive bass response that brought out the best in the track.

There was plenty of detail to be heard as well, taking advantage of the high-resolution audio stream from Apple Music. With Butterflies by Skrillex, the vocals sounded clean and striking, playing well with the deep attack of the lows. The fainter instrumental elements and subtle background vocals sounded distinct and engaging, particularly at moderate to high volumes.

The Sony WF-1000XM4 was capable enough to keep pace with the fastest and most varied of tracks across genres, adapting to different styles almost intuitively. The excellent sample-based Frankie Sinatra by The Avalanches sounded considerably better on the WF-1000XM4 than on any of the other true wireless headsets I've used recently. This pair of earphones was completely unfazed by the busy, rapidly changing styles of the track. Everything held together coherently, with a detailed and energetic sonic signature defining the enjoyable listening experience I had.

Active noise cancellation on the Sony WF-1000XM4 was expectedly very good, helped along by the effective noise-isolating seal from the ear tips. Turning on ANC made an immediate difference to the noise levels I was able to hear both indoors and outdoors. These earphones were particularly good at reducing wind noise and the hum of the urban outdoors.

The effectiveness of the noise cancellation also meant that I was able to keep the audio volume at safe levels even in noisy environments. That said, I have experienced slightly better active noise cancellation with competing products such as the Apple AirPods Pro.

The hear-through mode sounded fairly natural, but it is not quite as clean as on the Apple AirPods Pro. Speak-to-chat worked well, but it's very sensitive to even soft speech which can be annoying if you have a tendency to sing along with music, and this sensitivity can't be adjusted in any way. Voice assistant functionality worked well with both Google Assistant and Siri, and the Quick Attention mode is an intuitive way to quickly listen to your surroundings even if ANC is on and audio is playing.

The Sony WF-1000XM4 performed well with phone calls and audiobooks – both of which put the focus on voices and speech – and I had no trouble understanding or being understood even in somewhat noisy environments. As previously mentioned, connectivity was stable even with the LDAC codec in operation, at distances of up to around 3-4m.

The Sony WF-1000XM4 is a flagship true wireless headset in every sense, and has one key factor that sets it apart from other products in this segment – LDAC Bluetooth codec support. This makes it particularly well suited to use with Android smartphones, and the sound quality on offer is indeed among the best that you can get with this form factor. Good active noise cancellation, a functional app, and useful features such as speak-to-chat, Quick Attention mode, and voice assistant support help make this a capable true wireless headset.

However, if you're using an iPhone, you'd be better served by the AirPods Pro for a number of reasons, including better connectivity and active noise cancellation, and sound that is practically as good with the AAC codec, save for slight differences in the sonic signature.