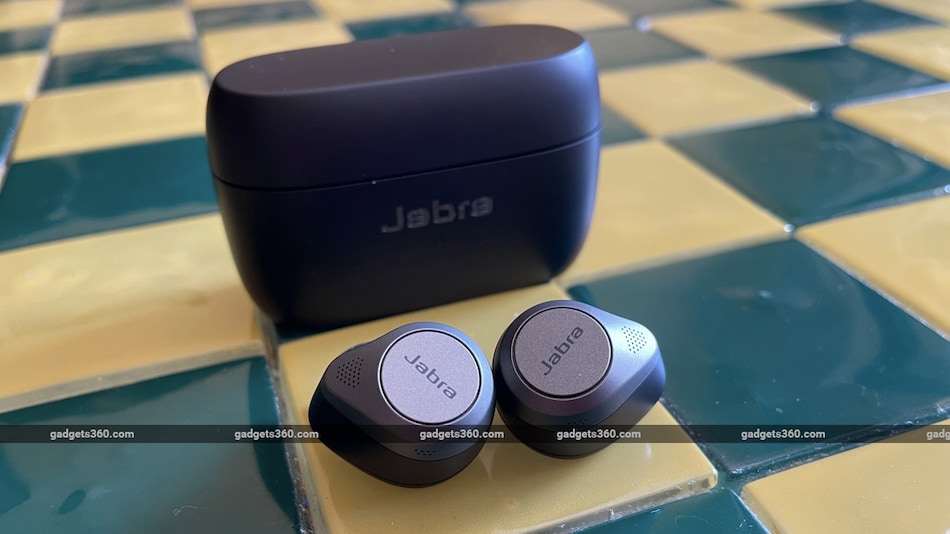 Although India tends to see a lot of launches in the budget true wireless audio space, the globally relevant premium segment has also been heating up quite a bit. The Apple AirPods range is usually favoured by iPhone users, and Android fans have a fair bit of choice now, with many new options from Sennheiser, Samsung, LG, and Oppo launched in the past few months. With the new Elite 85t, Danish audio brand Jabra has also updated its true wireless product range going into 2021.

The successor to the Elite 75t, the Jabra Elite 85t is priced at Rs. 17,999 and has a big new feature – active noise cancellation. There's also the promise of good performance on voice calls thanks to Jabra's expertise in the field, and of course great sound as well. Does the Jabra Elite 85t match up to these expectations? Find out in our review.

Three microphones on each earpiece, wireless charging on the Jabra Elite 85t

Although there are small changes to the design, the Jabra Elite 85t largely sticks to the familiar styling and fit of its predecessors, and looks a lot like the Elite 75t which was launched in 2020. The inner moulding does see some changes, in order to offer a better fit and passive noise isolation. There are also now three microphones on the coloured outer portions of the earpieces.

As with previous products in the Elite range, the Jabra Elite 85t is very comfortable, offers excellent passive noise isolation, and looks good as well. I've grown to really like Jabra's distinctive styling, which is iconic in its own right, and characteristic of the company's Scandinavian roots. Each earpiece has a physical button with an LED that shines through it to indicate the status of the earphones. Three pairs of silicone ear tips and a USB Type-C charging cable are included in the sales package.

The charging case of the Jabra Elite 85t is nearly identical to that of the Elite 75t as well, with a compact shape and size, magnetic lid, USB Type-C port at the back, and indicator LED right below the logo at the front. Usefully, there's also Qi wireless charging for the case of the Elite 85t, which wasn't present on previous models.

Each earpiece has a large physical button, and the headset's controls can be customised through the Jabra Sound+ companion app (available for iOS and Android). You can choose between playback controls, invoking the voice assistant, and cycling through sound modes (ANC, hear-through, or both off), with single, double, or triple-presses.

The buttons have additional functions for receiving and placing calls, and the two earpieces can be configured separately. Although there's no way to adjust volume, the rest of the controls are easy enough to learn and use. The buttons are easy to press, and even frequent use didn't upset the secure fit of the earpieces.

The Jabra Sound+ app has a custom profile for the Elite 85t earphones, and automatically detects the headset when it's connected to the source device. It's an excellent app that's presented well, and generally gets its job done efficiently. Apart from button customisation, you can also adjust the equaliser, control the ANC and hear-through levels, update the firmware, and more. Other interesting tools such as Jabra's My Moment sound mode settings and Soundscapes are also available. My Moment lets you set up custom sound profiles depending on your surroundings, while Soundscapes play different kinds of soothing sounds directly through the app.

The Jabra Elite 85t has 12mm dynamic drivers, and six microphones – three on each earpiece – for active noise cancellation and voice-based functions. The earpieces are IPX4 rated for water resistance, and will be able to take a few light splashes of water without risk of damage. For connectivity, the headset uses Bluetooth 5.1, with support for the SBC and AAC codecs. The lack of support for advanced Bluetooth codecs remains a drawback for Jabra.

The buttons on the earpieces can be customised to control playback, noise cancellation, and more

With active noise cancellation on and at moderate volume levels, I was able to get around five hours of battery life on the earpieces, with an additional three full charges from the case of the Jabra Elite 85t, for a total battery life of around 20 hours per charge cycle. This is decent, given the feature set and specifications of the headset.

Jabra's ‘flagship only' approach to the true wireless segment has resulted in some excellent products in the past few years, and the Elite 85t is an expected step up in the range. However, the core experience is familiar; the Jabra Elite 85t is an all-round performer, offering a competent and capable experience across all functions. Whether you're listening to music, taking calls, or watching videos, the Elite 85t does its job well.

The Jabra Elite 75t, while sounding good, has a tendency to be a bit aggressive with the bass; that problem is less pronounced on the Elite 85t, which offers a more balanced sonic signature with a greater focus on detail and cohesiveness. The equaliser, which can be set through the app, was quite responsive to changes, but the natural factory-tuned sonic signature was perfectly suitable for most popular genres.

Starting with Waiting by Oliver Heldens with the volume at around the 70 percent level and active noise cancellation turned on, the Jabra Elite 85t was immediately engaging and incredibly responsive. While the sonic signature isn't as punchy with the lows as that of the Elite 75t, there's definitely enough tightness and attack in the bass to make for an enjoyable listening experience. The mid-range and highs also held up well in Waiting, giving this fast-paced dance track a distinctly detailed feel.

The news of Daft Punk calling it a day had me revisit some of the group's more popular tracks, including Get Lucky. While the lows felt distinct and pronounced, Pharrell Williams' vocals and Daft Punk's signature synthesised robotic voices were equally sharp and distinct. It's a beautifully natural and adaptive sonic signature that adjusts well to all kinds of music. The Jabra Elite 85t was able to provide plenty of detail and character in these tracks.

The Jabra Elite 85t is an all-rounder among true wireless headsets, offering good sound, ANC, and performance on voice calls

Bluetooth codecs aren't necessarily everything, and good tuning can make up for being limited to even the basic SBC and AAC codecs. Jabra's excellent tuning of the Elite 85t does largely make up for the lack of advanced Bluetooth codec support. I had few complaints about sound quality, but the 85t does fall a bit short of some competing options such as the Samsung Galaxy Buds Pro and Sennheiser CX400BT in this department.

Both those headsets push the boundaries when it comes to detail and cohesiveness, and the Jabra Elite 85t doesn't quite go as far. That said, this would likely only make a significant difference if you're listening to high-resolution audio tracks. If you plan on sticking with streaming services such as Spotify, YouTube Music, or Apple Music, the Jabra Elite 85t will get as much as is possible out of the source device and tracks.

Active noise cancellation on the Jabra Elite 85t is very good, and it is largely on par with our top picks in the true wireless segment in this regard. The silence isn't quite as stark as on the AirPods Pro, but there's a significant reduction in background sounds whether indoors or outdoors, and the level of quiet doesn't go as far as to feel unsettling. The hear-through mode is decent as well, but not as natural-sounding as I'd have liked. Usefully, both ANC and hear-through levels are adjustable through the app.

Jabra's expertise with devices for professional voice-based applications has long paid off on its consumer products lineup, and the Elite 85t is an excellent headset for calls. Sound was clear on both ends of the call, and stable connectivity over reasonable distances in my home meant that I could conveniently use the earphones even while standing about 4.5m from the source device.

I've usually enjoyed my time with Jabra's true wireless headsets, and the Elite 85t is an excellent pair of earphones just like its predecessors. What particularly appeals to me about this pair of earphones is that it gets all the important bits right: sound quality, active noise cancellation, and performance on calls. It's also completely device-agnostic and works well regardless of the source and inputs.

Although it doesn't offer the best experience in any single department even for its price, you should consider the Jabra Elite 85t if you have various devices you want to use earphones with, and use them for everything they're meant for. Options such as the AirPods Pro, Galaxy Buds Pro, and Sony WF-1000XM3 might be better for specific use cases, but the Jabra Elite 85t is a great mix of the good bits of all three.