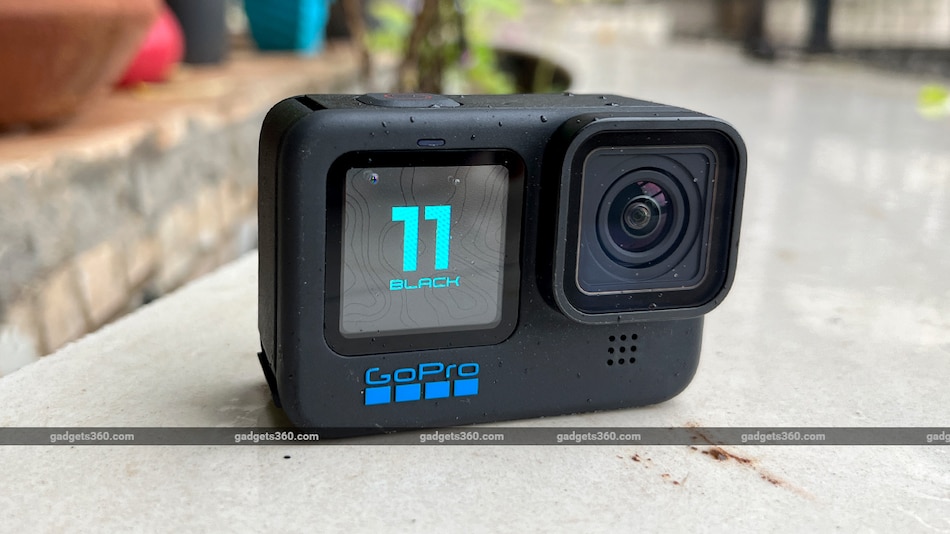 In terms of design and physical dimensions, the new GoPro Hero 11 Black is nearly identical to the Hero 10 Black. Apart from the '11 Black' inscription on the side of the camera, it's impossible to tell the two apart. The new camera has the same rugged design and is waterproof up to 10m. You get a 2.27-inch touchscreen display on the back, and a smaller, non-touch colour display on the front. The lens cover is removable and the 11 Black also supports the Max Lens Mod. The camera has collapsable mounting fingers on the bottom, and a flap on the side protects the battery and the USB Type-C port.

The Hero 11 Black ships with GoPro's Enduro battery, which was earlier sold separately for the Hero 10 Black. It promises up to 38 percent longer recording time compared to the Hero 10 Black (Review) with a standard battery. The Hero 10 Black introduced a brand new processor called GP2 last year and this year, the big addition in the Hero 11 Black is a new sensor. It's larger at 1/1.9 inches (vs 1/2.3 inches) and while the horizontal resolution is the same, you get more vertical resolution since it's taller and it supports a new 8:7 aspect ratio.

The larger sensor enables the GoPro Hero 11 Black to capture 27-megapixel stills and there's a new HyperView lens for video recording that produces an even wider field of view compared to the SuperView lens. The Hero 11 Black also supports 10-bit colour and a slightly higher 120Mbps video bitrate, which can be enabled in the ProTune settings. The new model also gets the latest version of HyperSmooth 5.0, support for 5.3K resolution when shooting Timewarp videos, and new presets for vehicle light trails and star trails in the Timelapse menu.

The maximum video recording resolution on the GoPro Hero 11 Black is the same as the Hero 10 Black, which is 5.3K at 60fps or 4K 120fps. There are plenty of variations for framerates and resolutions to play with and we will be exploring all of them in the full review. GoPro says shooting in the new 8:7 aspect ratio has its benefits as you can export the video later with the Quik app in a 4:3 or even 9:16 aspect (vertical videos for social), without losing any quality.

The user interface of the new GoPro Hero 11 Black should be familiar if you've used any recent GoPro, but the settings menu has now been better organised. The new Video Mode setting allows you to switch to an Extended Battery mode, which changes the default video recording presets to a lower resolution and disables the 8:7 aspect option. You can still customise each video preset, but switching to this mode gives you quicker access to video presets that won't drain the battery very quickly. The new Controls toggle button allows you switch to an Easy mode which gives you a single, uneditable preset for video, photo and timelapse, for those who just want to point and shoot.

A 27-megapixel photo captured by the GoPro Hero 11 Black

I've haven't spent a lot of time using the GoPro Hero 11 yet but so far, the image and video quality seem pretty good. GoPro's have always had excellent stabilisation and with the Hero 11 Black, there's something called Auto Boost, which only engages stabilisation when needed so the frame is not permanently cropped in for the duration of the clip. One cool feature that I really like is the new Horizon Lock for a full 360-degree rotation, which means the horizon stays constant even if the camera rotates 360-degrees. This was one of the core features of the Max Lens Mod and the GoPro Max 360-degree camera, but the Hero 11 Black now supports it natively.

If you skipped the GoPro Hero 10 Black, then the Hero 11 Black should be an interesting choice as it's a bit cheaper at Rs. 51,500. However, other than the new taller aspect ratio, does the new sensor offer any other improvements in terms of image quality for casual users over last year's model? We will be testing the GoPro Hero 11 Black in the coming days, so don't forget to check back for the full review.