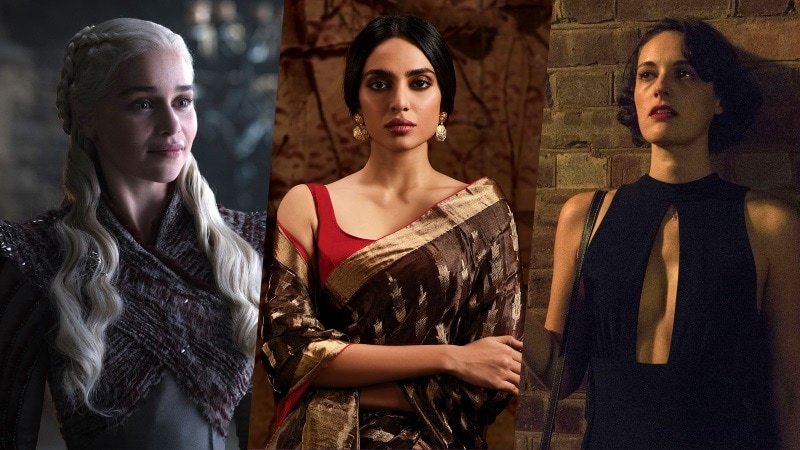 (L-R): Game of Thrones, Made in Heaven, and Fleabag

After a quiet winter that brought the end of Tina Fey-created Unbreakable Kimmy Schmidt and the Neil Patrick Harris-starrer A Series of Unfortunate Events, alongside a couple of terrible Indian originals from Netflix and Amazon — Selection Day and Four More Shots Please! — we are headed into the much more promising spring period, thanks to the Emmys' eligibility system. Don't worry if that doesn't make sense, just know that Game of Thrones is back. Yes, after 20 months! That's not the only show that's returning after a long while. Both Veep and American Gods are returning too, with the former set for its final season. And if you're looking for Indian content, we have three from the big streaming houses, (sadly) including one of the aforementioned ones. Hopefully, the new season will be better.

Here are upcoming TV shows on Netflix, Amazon and Hotstar for the next three months.

Gully Boy makers Zoya Akhtar and Reema Kagti are moving from the bylanes of Dharavi to the courtyards of Old Delhi with this lavish production, which follows the professional and personal lives of two wedding planners (Sobhita Dhulipala and Arjun Mathur), amidst the extravagant backdrop of “big fat Indian weddings”. Lipstick Under My Burkha's Alankrita Shrivastava co-wrote all nine episodes.

Made in Heaven Trailer: Gully Boy Makers Are Behind Amazon Prime Video's Next Original Series

A massively-delayed second season due to behind-the-scenes trouble — original showrunners fired, with their replacement eventually side-lined too, in addition to cast members Gillian Anderson and Kristin Chenoweth departing, and two episodes being chopped off the season order — picks up where it left off, as the brewing battle between the Old and the New Gods moves towards a crisis point.

David Farr, the writer of the 2011 film of the same name, is turning his script into an ongoing series, which reunites the two main stars of The Killing: Mireille Enos and Joel Kinnaman. Newcomer Esme Creed-Miles stars in the titular role, of a young girl raised in the wilderness to become an assassin. Sarah Adina Smith (Buster's Mal Heart) directs.

Bill Hader and Henry Winkler both won Emmys for their acting work in this HBO dark comedy about a hitman (Hader) wanting to leave his old life behind and become an actor, and the second season somehow finds him being pulled in deeper in both directions. Hader will also return behind the camera as director, alongside co-creator Alec Berg and Grammy-winner Hiro Murai (Atlanta).

For its seventh and final season, the political satire comedy starring serial Emmy winner Julia Louis-Dreyfus is looking at a shortened run of seven episodes, which we suppose is poetic. Selina Meyer (Louis-Dreyfus) is once again running for the office of the United States President, with her former staffer Jonah (Timothy Simons) also in the race. Expect things to go hilariously wrong.

Netflix apparently loves BBC's nature shows so much that it borrowed not just the template but even the makers for this docu-series. Sir David Attenborough is the narrator on this ambitious four-year project, helmed by the makers of Planet Earth and Blue Planet. It was filmed in 50 countries — including India — across all seven continents, with the involvement of over 600 crew members.

Arguably the biggest show of the current decade, the epic fantasy series — which looks medieval but is much more contemporary — concludes its run with a shortened eighth and final season, consisting of just six episodes. With the Wall brought down at the end of last season, it's time for a climactic battle between the living and the dead — and dragon versus dragon, we hope.

Despite a critical pounding, Netflix's cricket-themed Indian original — based on Indo-Australian author Aravind Adiga's book of the same name — will return to continue the coming-of-age story of two brothers (Yash Dholye and Mohammad Samad) brought up by their domineering father to become the two best batsmen in the world. Ratna Pathak Shah, Mahesh Manjrekar co-star.

Nearly three years on from the first season, Killing Eve creator Phoebe Waller-Bridge brings back her darkly-comedic acerbic show — in which she also stars — that picks up “371 days, 19 hours and 26 minutes” from where we left off. Expect the same combination of sadness and wit in the second season, in which the eponymous character falls for a priest.

David Tennant and Michael Sheen are leading the cast of this six-episode adaptation of Neil Gaiman and Terry Pratchett's comedic 1990 fantasy novel, which has Gaiman himself as writer and showrunner. In it, an angel (Sheen) and a demon (Tennant) join hands to thwart the end of times. Jon Hamm, Michael McKean, and Nick Offerman also star, while Frances McDormand and Benedict Cumberbatch have voice roles.

If you're a fan of Game of Thrones, check out Transition, Gadgets 360's gaming and pop culture podcast for a discussion around season 8, popular fan theories, and our favourite characters. You can listen to it via Apple Podcasts or RSS, or just listen to this week's episode by hitting the play button below.