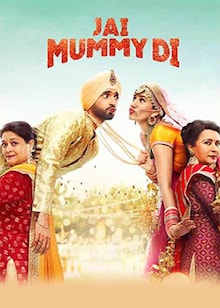 Jai Mummy Di is a light-hearted comedy-drama by debutant director Navjot Gulati. The storyline focuses on two high-school sweethearts- Punnu (Sunny Singh) and Saanjh (Sonnalli Seygal), who are also neighbours. While the two are heads over heels in love with each other, their warry moms are in a constant state of rife with each other. Given their perpetual state of anger at the very sight of each other, the two moms are candidly called Gabbar (Poonam Dhillon) and Mogambo (Supriya Pathak), after the popular villains in Bollywood. Turns out the two were best friends back in their teens. The rest of the story centre’s around As Puunu and Saanjh’s seemingly impossible mission of finding a way to get them along and ensure a happily ever after for their love tale. Jai Mummy Di is a story about 2 rival neighbours Khannas and Bhallas but their children, Puneet (Sunny Singh) and Saanjh (Sonnalli Seygall) who fall in love with, despite their mothers being enemies with each other who were actually best friends in their teens. Afraid of their Laali Khanna (Supriya Pathak Kapur) and Pinky Bhalla (Poonam Dhillon), their families pretend to be enemies. The entire movie only shows how Puneet and Saanjh try to find out what goes wrong between Laali and Pinky in their college days. The leading actors try too hard to make it a fun-ride but fail at it immensely. Sunny Singh delivers a sober performance as Puneet but Sonnalli Seygall fails to fit into the character of Saanjh.

The story is Jai Mummy Di is an interesting plot but the lack of storytelling and certain unfit characters took away the charm of the film.

If you've missed watching this unusual romantic comedy flick, then the wait is over as now you can watch Jai Mummy Di full movie online in HD on Netflix. Gather all your junk food like chips, cold drinks and pop-corns to sit and enjoy this movie comfortably on your recliner.

Jai Mummy Di trailer will take you on a hilarious ride. In the movie trailer, Sunny Singh and Sonnalli Seygall are seen as each other love interest while Supriya Pathak and Poonam Dhillon are the mothers who are in a terribly complicated relationship which makes it difficult for the two love birds to create their own nest by taking it forward with a marriage. Now that we gave you a glimpse of Jai Mummy Di trailer, take a look at the Jai Mummy Di official trailer below.