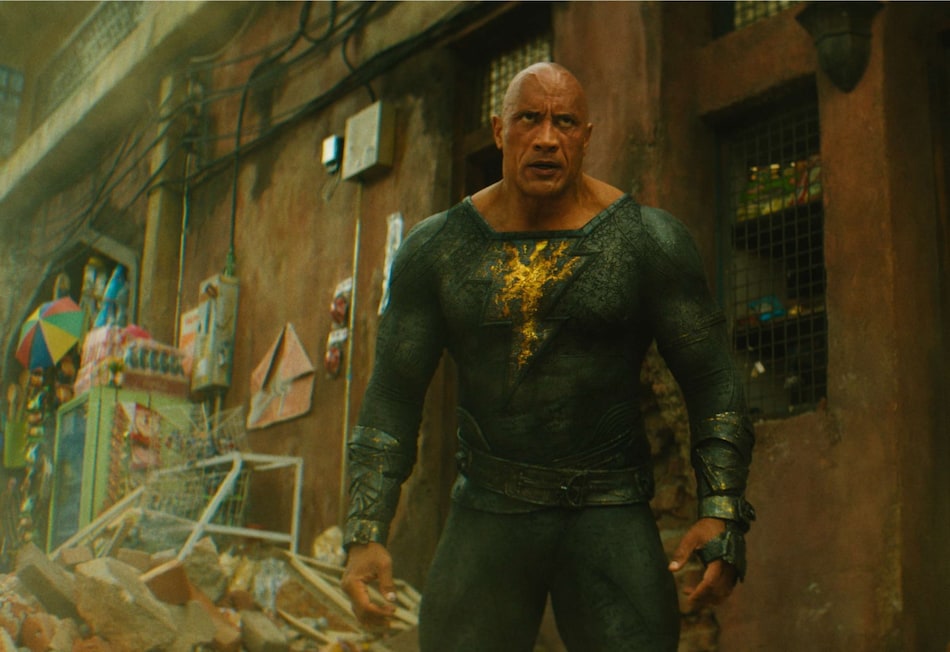 Dwayne Johnson in a still from Black Adam

Black Adam — out October 20 in India — marks the first time the lightning-honing anti-hero is brought to the silver screen. Dwayne Johnson has spent the last 15 years, trying to usher in a new era in the DC Universe, with hopes to reimagine a heavyweight bout between him and Superman. The upcoming film also serves as an introductory platform for four new superheroes in the franchise. Besides Johnson's Teth/ Black Adam, we have the Justice Society of America (JSA), roping in Aldis Hodge as Hawkman, Pierce Brosnan as Doctor Fate, Quintessa Swindell as Cyclone, and Noah Centineo as Atom Smasher.

Johnson was initially slated to appear in David F. Sandberg's Shazam!, but plans changed in 2017, with The Rock pushing for a solo origin story. Under Jaume Collet-Serra's (Jungle Cruise) direction, the film was eyeing a 2021 release, before the COVID-19 pandemic-induced lockdowns caused further delays. Reviews for Black Adam are out now, with critics calling out its “repetitive” action sequences and underdeveloped characters.

Here are some of the reviews for Black Adam:

IGN's Joshua Yehl believes Black Adam to be oversaturated and underdeveloped, thanks to the inclusion of the JSA, a trio of human characters, and a villain, all squeezed into one movie. “When it's the same kind of action on repeat, where we see Black Adam perform an endless string of PG-13 Mortal Kombat Fatalities against nameless goons, then it starts to get old.”

Variety's Peter Debruge had a more favourable opinion of the movie, claiming “the whole purpose is to give Black Adam a suitably grand introduction on the assumption that he'll be pitted against a more deserving adversary soon enough.” If the film fares well at the global box office, maybe we get to see a fight against Superman.

Just Tuesday, reports emerged stating that Warner Bros. is looking to create a sequel to Man of Steel, with Henry Cavill back on board.

The Guardian's Peter Bradshaw assigned a three-star rating to Black Adam, claiming that Johnson's performance and deadpan humour make him a charismatic DC superhero, though “sadly, he's in a class of his own.” He adds: “It's a shame that all these other DC-ensemble heroes crowding into the action are frankly not really in his class, although Viola Davis' brief cameo as Task Force X chief Amanda Waller brings the menace.”

The Hollywood Reporter critic John Defore held a similar, favourable opinion stating that Johnson's charisma carries the “morally muddy superhero flick.” He also hopes to see what's next in store for the character, saying, “[Dwayne Johnson's] passion project serves the character well, setting him up for adventures one hopes will be less predictable than this one.”

The Wrap's Alfonso Duralde labelled the film as “anti-entertaining,” calling it one of the most “visually confounding of the major-studio superhero sagas, between CG that's assaultively unappealing and rapid-fire editing that sucks the exhilaration right out of every fight scene.”

/Film's Witney Seibold found Black Adam to be a “hastily speed-read footnote than a feature,” adding that it's jumbled with blockbuster plot beats, making it hard to watch. “If the entire function of Black Adam is to set up a fight between Adam and Superman, as Johnson has said in public, perhaps skip a Black Adam movie and make only a 50-minute-long fight sequence,” he writes.

Black Adam is out Thursday, October 20 in India in English, Hindi, Tamil, and Telugu.