House of the Dragon Episode 10 Trailer: Rhaenyra Is on a Mission to Claim Her Birthright

Titled “The Black Queen,” House of the Dragon episode 10 teases an elaborate plan to lay siege to the Red Keep, one that involves dragons. 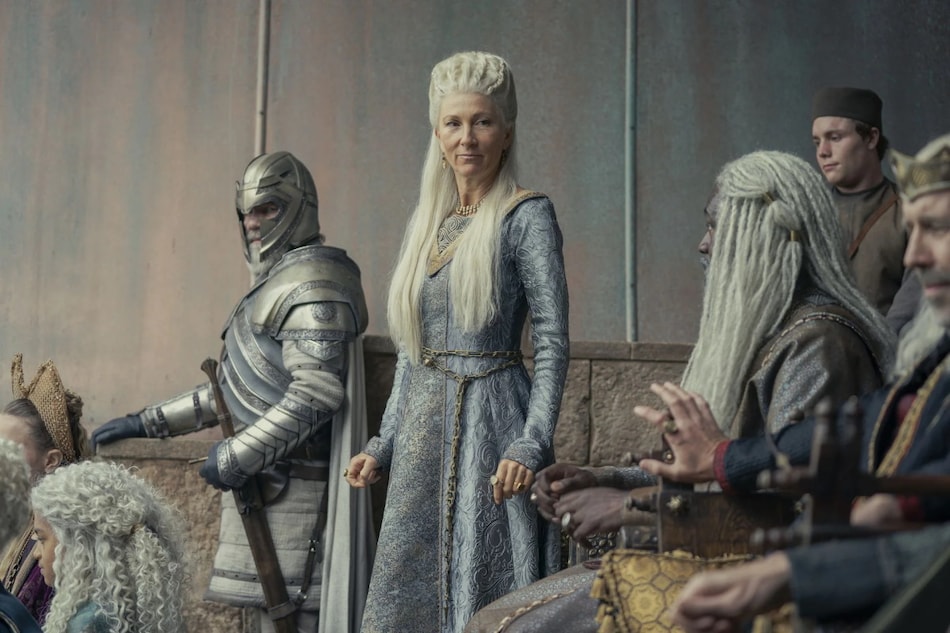 Eve Best as Rhaenys Velaryon aka “The Queen Who Never Was”

House of the Dragon episode 10 trailer is out. HBO has dropped a preview for next week's final episode of the first season of the Game of Thrones prequel series, picking up after Rhaenys Velaryon's explosive getaway from King's Landing, after being held captive. Titled “The Black Queen,” House of the Dragon season 1 finale hints at the aftermath of Aegon's ascension to the Iron Throne, with Princess Rhaenyra being informed of the treacherous goings-on at the household. House of the Dragon episode 10 premieres October 24 at 6:30am IST/ October 23 at 9pm ET on Disney+ Hotstar and HBO Max, respectively.

A worried reunion kicks off the House of the Dragon episode 10 trailer, as Rhaenys (Eve Best) makes her way to Dragonkeep, and informs Rhaenyra (Emma D'Arcy) and Prince Daemon (Matt Smith) of Aegon II's (Tom Glynn-Carney) coronation. “The Greens are coming for you, Rhaenyra,” she warns, referring to Queen Alicent Hightower's (Olivia Cooke) supporters. “And for your children.” This commences a near minute-long tease at the Targaryen camp, as they prepare to lay siege to the Red Keep. Rhaenyra, however, seems reluctant about the attack plans, urging her consort Daemon to remind her of the stolen birthright. “You cannot bend the knee to the Hightowers,” he says in a voiceover.

House of the Dragon Episode 9 Review: The King Is Dead, Long Live the King

Dragonstone's iconic Painted Table also makes an appearance in the House of the Dragon episode 10 trailer, with the craftsmanship looking fresh. As Rhaenyra looks out over the sea and contemplates her next move as rightful heir, there is a quick shot of someone placing a piece on the map's representation of Winterfell. Game of Thrones fans will recognise this castle as the seat of House Stark. We then see Rhaenyra's eldest sons, Jacerys (Harry Collett) and Lucerys (Elliot Grihault), requesting to play a role in the upcoming war, with the latter racing toward the dragon Arrax — the smallest of the bunch.

As per King Viserys' (Paddy Considine) dying wishes, Jacerys was to be his mother's heir and successor to the Iron Throne, while Lucerys would inherit the Driftwood throne at the mariners' kingdom. The House of the Dragon episode 10 trailer ends with Daemon singing a High Valyrian lullaby, trying to soothe the now-awake monstrous dragon.

For now, part showrunner Ryan J. Condal is heading House of the Dragon season 2 with newcomer Alan Taylor, who shares directorial credits with some early Game of Thrones episodes. Meanwhile, Miguel Sapochnik has stepped down from the project, and going forward, will be credited as executive producer.

The final House of the Dragon season 1 episode airs Monday, October 24 — that's Diwali — at 6:30am IST on Disney+ Hotstar in India, and Sunday, October 23 at 6pm PT/ 9pm ET on HBO Max wherever available.

5G Services to Be Rolled Out in at Least 4 Odisha Cities by March 2023, Union Minister Ashwini Vaishnaw Says
Foxconn Unveils Pickup, Crossover Models; Wants Customers to 'Sell a Lot of EVs': All Details