Is that a lot? Is that too little? Nobody knows. 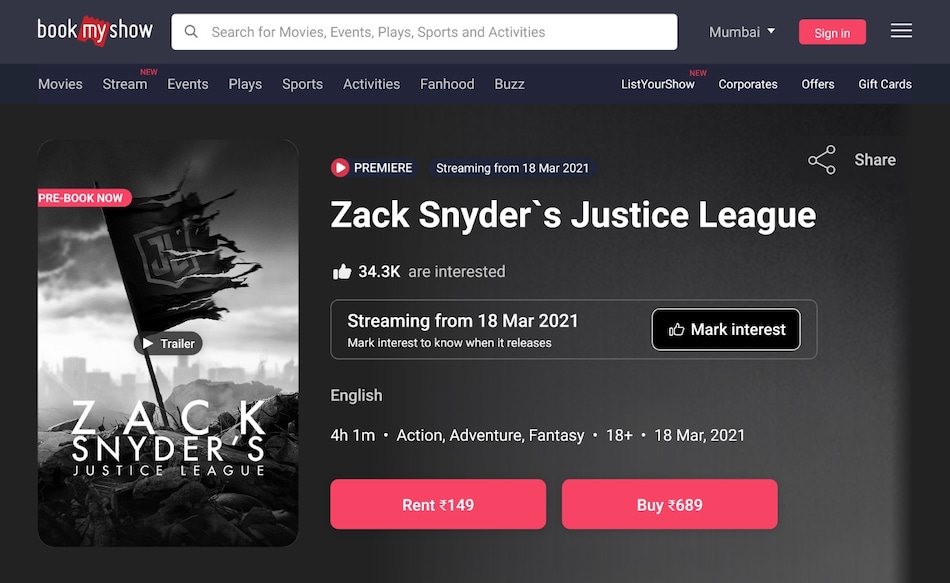 Justice League Snyder Cut racked up over 31,000 pre-orders on BookMyShow Stream, the ticketing platform has announced, prior to the film's release earlier on Thursday. There's no way to quantify the interest in Zack Snyder's Justice League because we're lacking context. In India, movies aren't released directly on video-on-demand — Snyder Cut is an exception. During the pandemic, while Hollywood pushed hundreds of titles to on-demand, Bollywood opted for the streaming route that has proven to be a more reliable money maker. Video-on-demand has historically had negligible contribution to the revenue of films in India, which is why new movies go from cinema to streaming once their theatrical windows are up, short-circuiting the process that involves on-demand and Blu-rays internationally.

BookMyShow Stream was the first platform to start pre-orders for Justice League Snyder Cut, back on March 6, 12 days prior to release date. None of the other participating video-on-demand services — Apple TV, Hungama Play, and Tata Sky — bothered to open pre-orders until March 18. Apple TV did so several hours before release (albeit without a rent option), with Tata Sky following half an hour prior to the release time. Hungama Play didn't bother with pre-orders at all. BookMyShow Stream — the youngest platform of the lot, given it didn't even exist until February — seems to have raked in the benefits of early pre-orders.

“We are absolutely thrilled with the phenomenal response that Zack Snyder's Justice League has received on BookMyShow Stream,” BookMyShow's Chief Operating Officer for cinemas Ashish Saksena said in a prepared statement. “The film's pre-release success reflects the potential that the [transactional video-on-demand] model holds and the resulting extension in the duration of the available window for a movie's life cycle, is a testament to India's evolving entertainment consumption patterns when given a compelling content library with a world-class product rolled into one. We truly believe that curated and handpicked content goes a long way and with BookMyShow Stream, we will continue to bring compelling films from all over the world for Indian movie-lovers.”

Naturally, BookMyShow is painting a much rosier picture, given it's invested in growing the fledgling BookMyShow Stream, but it's impossible to say how popular video-on-demand will be in the future. After all, Justice League Snyder Cut is possibly the hottest property right now out there — and it managed 31,000 pre-orders in 12 days. I'm going to preface this by noting that it's an unfair comparison to make, but Avengers: Endgame — possibly the last thing to generate this much interest in the fandom — sold a million tickets on BookMyShow in just over a day. The number went up to 5.5 million tickets in six days. Yes, this is far from an apples-to-apples comparison, but that's the closest context we have.

Zack Snyder's Justice League is out now on Apple TV, BookMyShow Stream, Hungama Play, and Tata Sky in India. It's also available on HBO Max in the US, HBO Go in parts of Asia, and HBO services in Central Europe, the Nordics, Portugal, and Spain. In all other markets, it's available on a range of video-on-demand platforms.

Asus on the ROG Phone 5, What’s the Next PUBG Mobile, and Building a Community of Gamers in India
Epic Games Shares Early Look at Party System, Reveals Plans for Improving Social Experience in Its Store