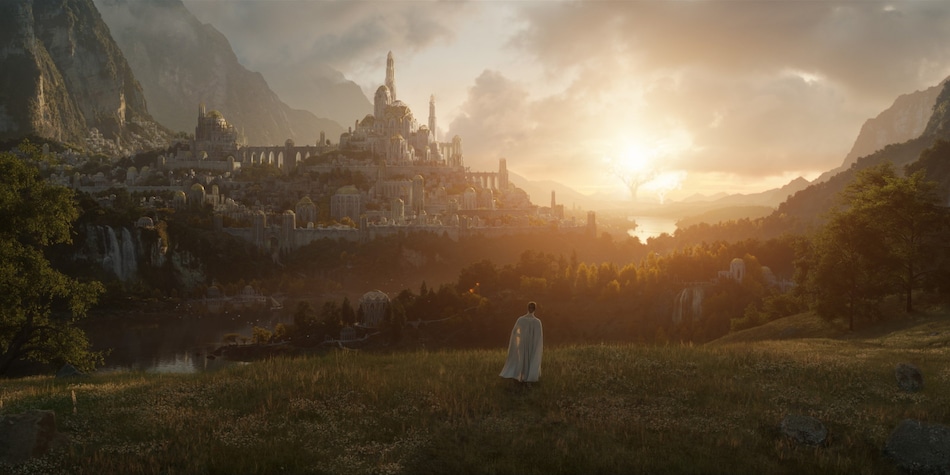 The Lord of the Rings season 1 first look

Amazon's The Lord of the Rings prequel series now has a release date: September 2, 2022. Prime Video announced the premiere date alongside a first look for the highly-anticipated Lord of the Rings TV show following production wrapping up on the first 20-episode season in New Zealand. New episodes will release weekly, as we have known for a while, on every Friday. The first look of Amazon's The Lord of the Rings prequel series shows an unseen character in a grassland against what LOTR fans believe to be the Two Tress of Valinor, ancient light sources that lit up Middle-earth before the Sun and the Moon.

This is all guesswork and speculation, for Amazon won't say who's in the shot or where it's from, except that the photo is from the first episode of The Lord of the Rings prequel series. Set thousands of years before the events of The Lord of the Rings film series and J.R.R. Tolkien's novels on which they were based, the Prime Video TV show takes place in the Second Age of Middle-earth in a “time of relative peace” and follows an “ensemble cast of characters, both familiar and new, as they confront the long-feared re-emergence of evil to Middle-earth.”

Why Does Amazon's Lord of the Rings Season 1 Cost $465 Million?

The Lord of the Rings showrunners J.D. Payne and Patrick McKay said in a prepared statement: “As Bilbo says, ‘Now I think I am quite ready to go on another journey.' Living and breathing Middle-earth these many months has been the adventure of a lifetime. We cannot wait for fans to have the chance to do so as well.” Payne and McKay also serve as executive producers alongside Lindsey Weber, Callum Greene, J.A. Bayona, Belén Atienza, Justin Doble, Jason Cahill, Gennifer Hutchison, Bruce Richmond, and Sharon Tal Yguado. Bayona directed the first two episodes.

“The journey begins September 2, 2022 with the premiere of our original The Lord of the Rings series on Prime Video,” Amazon Studios head Jennifer Salke added. “I can't express enough just how excited we all are to take our global audience on a new and epic journey through Middle-earth! Our talented producers, cast, creative, and production teams have worked tirelessly in New Zealand to bring this untold and awe-inspiring vision to life.”

Amazon's as-yet untitled The Lord of the Rings original series premieres Friday, September 2, 2022 on Prime Video in more than 240 territories and countries around the world.