Love Per Square Foot Review: Nothing But Your Typical Rom-Com 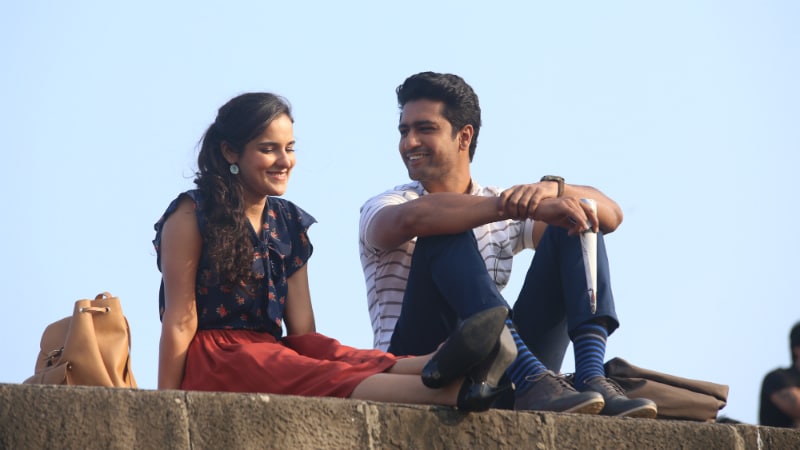 A frequent criticism of Netflix in India is that the streaming giant has a paucity of local content. Netflix is looking to change this, and is all set to release the first of its six original Indian productions. Love Per Square Foot is the first mainstream film from India to be available exclusively on Netflix globally across 190 countries. It is available on Netflix starting February 14.

The film has been produced by Ronnie Screwvala's RSVP Productions, directed by stage personality Anand Tiwari, and written by Anand Tiwari, Asif Ali Beg, and Sumeet Vyas (TVF Permanent Roommates and TVF Pitchers). It stars Vicky Kaushal of Masaan fame, and Angira Dhar of Bang Baaja Baaraat (YFilms) in the lead. Ratna Pathak Shah and Supriya Pathak are seen playing prominent roles in the film, alongside critically acclaimed actor Raghubir Yadav. While Netflix represents a chance for some filmmakers to break the status quo in some ways, Love Per Square Foot certainly doesn't fall in that category.

The movie is set in Mumbai and quickly establishes that the lead characters are regular middle-class folks, with dreams of owning a house in the city someday. Sanjay Chaturvedi (Vicky Kaushal) and Karina D'Souza (Angira Dhar) work in the same bank. Chaturvedi, a low-level software engineer, is romantically involved with his boss. On the other hand, D'Souza's fiance is Samuel Masquita (Kunaal Roy Kapur). Both the lead characters are shown to have plans to buy a house from the same housing plan, though their partners do not appear enthusiastic about the idea.

Within the first few minutes of the film, viewers can gauge that Chaturvedi and D'Souza will somehow end up together considering how they "accidentally" match up at a dance during an office colleague's wedding. However offbeat or online audience-oriented it might want to appear, Love Per Square Foot somehow fits in two full songs (one indie rap and one jazz) within the first 15 minutes of the film.

D'Souza works in the home loan department of the bank, which has refused Chaturvedi's application citing financial constraints. He gets angry at her, apologises after office hours, and they end up going for coffee where they discuss the idea of forging a marriage to apply for the house with EMIs divided equally between them.

This is followed by an awkward Sanjay Chaturvedi-and-boss "cuddle session" that ends with him going back to his house where he gets fed up of the lack of space and privacy - establishing his desperation to shift to his own house. On the other hand, D'Souza gets forced into marriage by her fiance, showing us why she's desperate to do the deal.

Love Per Square Foot is reminiscent of Bollywood's age old "everything happens for a reason" storyline. They meet a guy - someone Chaturvedi had saved from getting pick-pocketed in a train - at the registration office, who helps them apply for the housing scheme in the shadiest way possible. Following that is an express getting-to-know-each-other session and, like every other rom-com ever, the lead characters start falling for each other.

The lead characters agree to get married (timed just before the announcement of the housing scheme), boy meets girl's family and girl meets boy's family. The film takes a slight turn to reflect on the religion divide in India; situations that are bound to occur in a Christian-Hindu marriage situation. Ratna Pathak Shah (D'Souza's mother) and Supriya Pathak (Chaturvedi's mother) appear on screen together for the first time, with a few comical instances and not-so subtle banter about religious differences.

But things take a weird turn when Chaturvedi sleeps with his boss to get money for the deposit on the house. He blurts out the truth to D'Souza, who is advised by her friends to forgive him. "But don't ruin everything for a stupid mistake," says a friend/ colleague to her.

They secure the house in the scheme, but Love Per Square Foot is still stuck in establishing a relationship between the lead characters, Chaturvedi and his boss, and the boss and her partner. Another twist appears when his boss tells Chaturvedi that she is pregnant with his baby. The storyline goes into another tangent, her hoax is called out but not without wasting a few minutes of pointless personal arguments in the office, before getting back to the point. D'Souza makes her decision of not continuing with the marriage/ deal.

A surprise wedding is planned by the parents, while Chaturvedi meets up with the registration office guy to assign the house in his name before the deal is broken. Upon hearing about this, D'Souza is aghast and rushes to the house only to find out that Chaturvedi had, in fact, transferred the house in her name; a possible attempt to gain brownie points as we approach the climax.

A cameo by veteran Web series actor Gopal Datt lightens up the mood in the otherwise never-ending sequence of plot twists. The movie ends with the lead actors patching up and getting married after all.

Being an online-exclusive, yet mainstream, Hindi movie, Love Per Square Foot is stuck catering to two distinct audiences. While it has a cast full of recognisable faces from the online content world, it also has synchronised dancing and loose plot lines. Performances by Kunaal Roy Kapur, Ratna Pathak Shah, Supriya Shah, and Raghubir Yadav stand out from the rest. We like the comical traces, however, the storyline shifts goalposts quickly. It seems like the writers were trying to create a Web series in the timeline of a mainstream movie, which doesn't entirely work.

There is no point in the movie that can particularly excite the audience, as most of the scenes seem predictable in their essence. Director Anand Tiwari has worked on successful projects like Bang Baaja Baaraat, and acted in popular movies like Udaan and Slumdog Millionaire. Love Per Square Foot, however, is nothing like his previous work; it lacks the X factor that people have come to expect from him.

One thing we like about the movie, however, is that it does not try too hard. Unlike TVF's Permanent Roommates Season 2 and several shows on ALTBalaji, the movie stays believable and keeps things closer to real life. Vicky Kaushal and Angira Dhar's casting fits well, with Kaushal trying out a light-hearted role after dozens of serious roles. Arunoday Singh appears in a forgettable cameo, with his diet regime looking off the rail.

As Netflix India Completes Two Years in India, a Look at the Challenges It Faces in the Growing Video Streaming Space

RSVP is Ronnie Screwvala's independent production house that has 11 movie projects in the works, including films on kabaddi, Ram Jethmalani, Shakuntala Devi among others. While the initial projects might be hit-and-miss, we can expect the ex-UTV boss to produce something on par with UTV banner films like Rang De Basanti, Swades, and Dev D in the future. And if nothing else, Love Per Square Foot shows that Netflix can make a typical Bollywood film if it wants to.

Google Game Streaming Service Codename Yeti in the Works, May Include Console and Controller: Report
Smart Home Unit Nest Is Spun Back Into Google