The Mandalorian Season 2 Episode 3 Recap: Child of the Watch

Spoilers ahead for The Mandalorian Chapter 11: The Heiress. 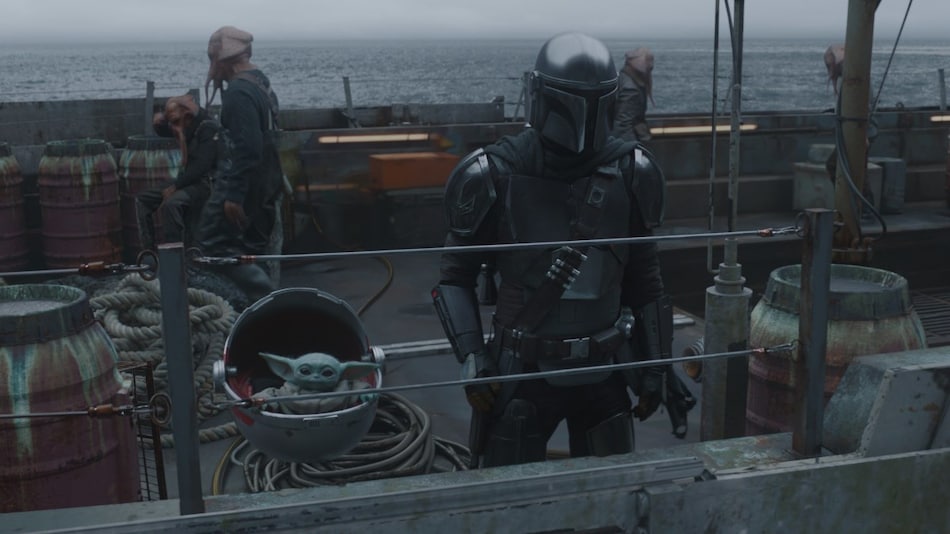 The Mandalorian season 2 produced the most substantial episode of the new season with episode 3 — titled Chapter 11: The Heiress — as it not only gave us the thrills that we've come to expect from the Star Wars series, but also expanded on its lore. We now know that our titular protagonist (Pedro Pascal) belongs to an off-shoot cult of Mandalorian society called the Watch, whose members would probably scream “Make Mandalore great again” if they lived in our world. The information puts a new spin on Mando's oft-used line, “This is the way”, which now reads like a brainwashing tactic, rather than just an affirmation of values.

But before Mando's philosophy and upbringing was called into question, Chapter 11: The Heiress — directed by Bryce Dallas Howard (who also directed Chapter 4: Sanctuary) and written by Jon Favreau — gave us some bits of humour. Even with the help of Frog Lady (Misty Rosas), the Mando struggled to land his severely-damaged ship Razor Crest on the estuary moon of Trask. And just when Mando thought he had everything until control, the Razor Crest falls sideways into water. Poor Razor Crest, nothing has been more badly treated in The Mandalorian season 2. The Mando asks a Trask dock worker if he can fix it, to which he flatly replies no as the camera pans to reveal the horrid state it's in.

Humour gave way to some tenderness on The Mandalorian season 2 episode 3 as Frog Lady is finally reunited with her husband, Frog Man (John Cameron). I'm sure they have actual names but the show doesn't bother to provide them, so we're stuck using these. For what it's worth, this is quite possibly the last we will see of them this season. Their last few on-screen moments are quite sweet, further marked by a literal change of tune from The Mandalorian composer Ludwig Göransson, who ditches his usual bombastic score to lend some warmth to the scene. Baby Yoda might have consumed many of her eggs, and he's still hungry — someone feed him please — but Frog Lady's family line will continue, thankfully.

The Mandalorian Season 2 Episode 1 Recap: Belly of the Beast

Frog Man, Baby Yoda, Frog Lady and one of her babies in The Mandalorian season 2 episode 3
Photo Credit: Disney/Lucasfilm

Speaking of feeding Baby Yoda, the Mando takes him to a local Trask diner to do just that, where he's told by the Frog Man he'll find information on the other Mandalorians he's been looking for. Baby Yoda's food turns out to be alive and that surprises him, but Mando isn't bothered and tells him to stop playing with his food. The server finds a man who can help Mando, a guy called Quarren whose face looks like an octopus, and the two set out to sail after Quarren says he's seen some Mandalorians two hours away by boat. Except it's a ruse to steal Mando's beskar, something everyone seems to have an eye on, which is not surprising given the price it fetches.

Quarren flings Baby Yoda into the water where a giant sea animal is ready to gobble him up, though Baby Yoda has the presence of mind to shut himself in his case before he's swallowed whole. Naturally, Mando jumps in after him, which is exactly what Quarren and his men were hoping for. They shut the steal gates and try to drown him. Thankfully for Mando, the other Mandalorians he has been looking for show up out of the blue (sky) and rescue both Baby Yoda and him. Baby Yoda's shell is mostly destroyed though, and Mando will need to find a new floating home for the green critter, but at least he's still alive. And that's more than you can say for Quarren and his men.

Finding other Mandalorians is what Mando has been working towards since the start of The Mandalorian season 2, and the moment has finally arrived, having almost died nearly half a dozen times along the way. But the meeting takes a very different turn after the three new Mandalorians take off their helmets. This goes against everything our Mando has been told — there's even a reminder of this fact in the episode's “previously on” recap — and he reacts exactly how you would expect him to, telling them that anyone who takes off their helmet isn't a real Mandalorian.

Star Wars fans who have seen The Clone Wars and Star Wars Rebels — the two animated series are set between Episode II and Episode IV, while The Mandalorian takes place after Episode VI — would have likely recognised the armour of our new heroic Mandalorians. Bo-Katan Kryze has been involved in the two aforementioned animated series, and her teammates are Koska Reeves and Axe Woves. This is the first Star Wars appearance for the latter duo.

In response, their leader Bo-Katan (Katee Sackhoff) reveals she was not only born on Mandalore but also fought in the Purge. And the armour she's sporting has been part of her family for three generations. If anything, she's more Mandalorian than Mando himself, she seems to suggest. But it's what she says after that changes everything we've been told about “the Mandalorian way”. The Mando is a Child of the Watch, a cult of religious zealots that broke away from Mandalorian society with the goal of re-establishing “the ancient way”. Mando is taken aback, declares there's only one way, and promptly flies away.

But after he runs into trouble again at night on the harbour with some of Quarren's brothers, and needs rescuing again by Bo-Katan and Co., Mando agrees to sit down with them for a drink. Bo-Katan tells him that Trask is a black-market port where people are making money out of selling things plundered from Mandalore. Bo-Katan is trying to take back their home planet — which Mando believes is cursed, but you can't exactly trust what he's been told anymore — and she needs weapons to do so. Mando says that's not his mission, needs to find the Jedi. Bo-Katan says she knows one but first, he has to help them with a mission of their own: take on an Imperial Gozanti freighter.

The four — Mando, Bo-Katan, Koska, and Axe — make short work of the Stormtroopers on board the freighter. Bo-Katan's crew are highly efficient, Mando seems to be almost taken aback by how little he's having to do, though he's able to display his bravado and the strength of his beskar armour as he charges into a bunch of Stormtroopers that have them pinned down at a moment of need. Moff Gideon (Giancarlo Esposito) appears via hologram to instruct his officer (Titus Welliver) to sacrifice himself for the greater good, in order to prevent the weapons from falling into the Mandalorians' hands, but Mando and the others get there in time to stop him from crashing into the water.

Bo-Katan asks Mando to stay but he says he must continue on his mission. And as promised, for his help, Bo-Katan tells him where to find a Jedi: the city of Calodan on the forest planet of Corvus. These are not places we've heard of ever in the Star Wars universe, but we have heard of the name that Bo-Katan utters the moment after. The Jedi is called Ahsoka Tano, the Jedi Padawan of Anakin Skywalker and one of the protagonists of Star Wars: The Clone Wars. Disney had been closely guarding the reveal, even though her presence had been first reported back in March, with Rosario Dawson said to be cast to play her live-action version.

We can't wait for The Mandalorian season 2 episode 4. Hopefully, it won't keep us waiting like it's done with Jango Fett actor Temuera Morrison, who hasn't been seen since the end of episode 1.

Google Chat Conversations Can Be Pinned on Gmail Through This New Feature
Wonder Woman 1984 May Release on HBO Max a Week After Theatres: Report