PS Plus subscribers can add these games to their library from October 4 till November 1. 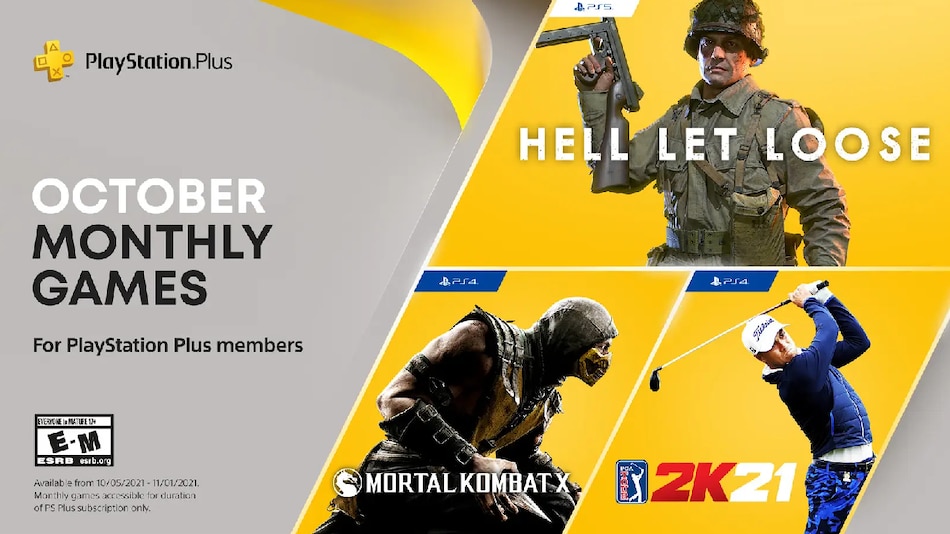 PlayStation Plus October free games list is out. Players will get three new games in the coming month — Hell Let Loose, PGA Tour 2K21, and Mortal Kombat X. Two out of the three games will be available for PlayStation 4 (PS4) players, while the 2019 World War II-inspired multiplayer game Hell Let Loose will be exclusive to PlayStation 5 (PS5) players. All three games will be available for download via PS Plus Starting October 5. Players having an active PS Plus subscription can download the new games until November 1. However, PlayStation Plus subscribers can still download September's games — Overcooked! All You Can Eat, Hitman 2, and Predator: Hunting Grounds till October 4.

Sony announced in a blog post that the free games will be available to download from October 5 to November 1.

Hell Let Loose is a multiplayer epic battle of 100 players and players shoot it out in matches of up to 50 per side. The RTS-inspired meta-game developed by Australian studio Black Matter was released in July this year. Team17 is the publisher of this World War II-inspired multiplayer title. Player can choose one of 14 playable roles within infantry, recon, and armour unit types. Each of the units will be packed with authentic weapons, equipment, and vehicles. Hell Let Loose will only be available for PS5 players.

Are you a Golf lover? If yes, you may get addicted to this adventure developed by HB Studios. The game, which is published by 2K Sports, lets you design your dream career. PGA Tour 2K21 will let players invite friends or play with the world's best players online. The player can also customise equipment, build a clubhouse, then run full seasons and tournaments customised to their own requirements.

The 2015 fighting video game is developed by NetherRealm Studios and published by Warner Bros. It features characters such as Scorpion, Sub-Zero, Raiden, Kano Cassie Cage, Kotal Kahn, Ferra-Torr, and D'Vorah. Mortal Kombat X offers three different versions for each playable character, and they will have different fighting styles, special moves, abilities, and strategies to pick from.