Call of Duty: Warzone, Vanguard Season Two to Debut on February 14: All You Need to Know 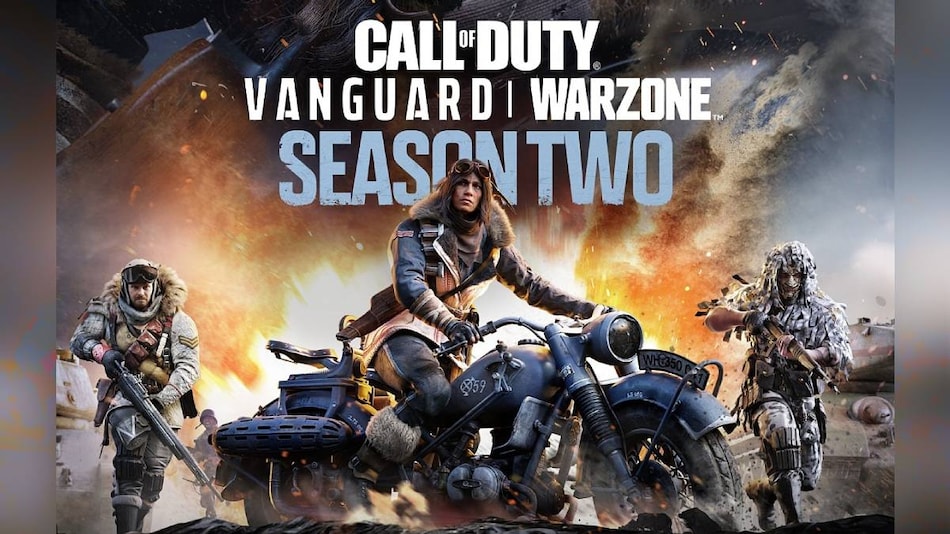 Call of Duty: Vanguard's and Call of Duty: Warzone's Season Two will debut on February 14, Activision announced on Tuesday. The upcoming season is set to feature armoured vehicles as well as new features such as Nebula V ammo and bombs, redeploy balloons, and more. Gamers will also be able to explore new points of interest such as the Chemical Factory and underground Chemical Weapon Research Labs while defeating Axis soldiers for rewards. Call of Duty: Vanguard will also add new maps and powerful new Wonder Weapons to the popular shooter.

The frontlines are getting reinforced. ????

Get ready for Armored War Machines coming to #Vanguard and #Warzone on February 14. pic.twitter.com/B25FZDN7IY

Call of Duty: Vanguard Season 2 is set to feature two new multiplayer maps — Casablanca, set in the streets of Morocco, and Gondola, a three-lane-style map above a large gulch and fire watchtower. The update will also bring the new Ranked Play mode that will launch in beta next week, with league-approved rules, visible Skill Ratings, and new rewards. The publisher will reveal more information about Call of Duty: Vanguard Multiplayer Ranked Play mode on February 11.

Meanwhile, Call of Duty: Vanguard will also add a new Ball Turret Gunner perk that can be activated after achieving a 12-kill streak, along with an Armory perk and Mechanic perk, while introducing a new throwable Sticky Bomb. The game will also feature new ballistic weapons and some melee tools and energy-based Wonder Weapons like the Ray Gun and Decimator Shield. The update will feature amoured war machines along with motorcycles, squad transport vehicles, and tanks that are set to arrive in Season Two of Call of Duty: Vanguard.

The game will also add a new hub map and arenas with Terra Maledicta — a new Zombies game mode with new locations, allies, and foes, which is coming to Call of Duty: Vanguard. Protagonist Krafft and company will face off with Von List in Egypt's Eastern Desert. New arenas will be added as part of the update and gamers will fight to gain a lost page from the tome of rituals, after battling Von List in the Dark Aether. Aided by Vercanna the Last, who seeks revenge on Kortifex, Krafft and his allies will fight against the undead while battling a new foe, Zaballa the Deceiver.

Meanwhile, Call of Duty: Warzone will feature Nebula V ammo and bombs, which can be found around the battle royale map, Caldera. Operators downed with Nebula V ammo will emit a poisonous gas cloud, and those who try to revive them will experience coughing, blurred vision, and slight damage over time. Nebula V bombs are rare, last for two minutes, and can be found in briefcases which must be activated to detonate after a countdown. Operators within the bomb's radius will experience damage if they do not have a gas mask or not near the new Portable Decontamination Station.

As part of the Season Two update, Armoured Transport Trucks will attack gamers in their vicinity with turrets, mines, and aerial support. However, destroying these vehicles will yield important items, including (in rare cases) an intact Nebula V Bomb, according to the publisher. Gamers will also be able to find these weapons in the Chemical Factory and Underground Chemical Weapons Research Labs that are guarded by Axis soldiers in Caldera.

Meanwhile, operators can also take advantage of Bomber Planes, the second aerial vehicle to be added the game, as well as Redeploy Balloons which lets players take to the skies to reposition themselves thousands of metres away, by using a zipline to the balloon and deploying their parachute. These balloons can be destroyed and reinflated by gamers.

Finally, Call of Duty: Warzone will also feature two new limited time game modes — Caldera Clash which is an evolution of Clash on Verdansk ‘84 and Warzone Rumble, and Rebirth Iron Trials. Caldera Clash will allow gamers to pick weapons from Call of Duty: Modern Warfare to Vanguard and earn a point for each kill for their team. The team which achieves the target points or has the highest points when the time runs out will win the round. Rebirth Island Trials will feature battle royale-style gameplay and feature weapons from Call of Duty: Black Ops Cold War, aimed at hardcore players of the Call of Duty community, according to Activision.