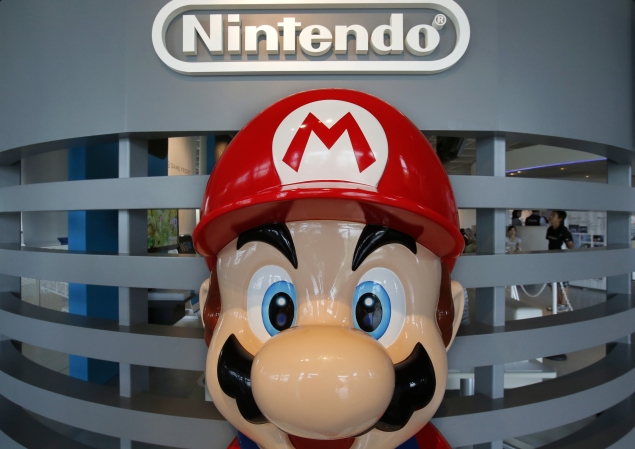 Japanese gaming giant Nintendo on Friday warned it would swing back into the red this fiscal year as it slashed its annual sales target for the Wii U game console, blaming a poor performance over the festive holiday.

The surprise revision came in marked contrast to rivals Sony and Microsoft who have seen huge demand for their new consoles as the firms battle for control of a sector worth about $44 billion annually.

Nintendo said Friday it expects a loss of 25 billion yen ($240 million) in the year to March, reversing an earlier 55 billion yen net profit forecast, while annual revenue would drop 36 percent to 590 billion yen.

The company, maker of the Donkey Kong and Super Mario brands, also said it expected to sell just 2.8 million units worldwide of the Wii U, way off earlier predictions of 9.0 million consoles.

Nintendo said its hopes for big holiday season demand were dashed, forcing it to chop forecasts as demand for the console's high-margin software slumped.

"As hardware sales failed to reach expected levels during the year-end sales season, sales of software, which have a high profit-margin, fell significantly below our forecast," it said in a statement.

Nintendo's top executive is to hold a news briefing in Osaka later in the day.

The downgrade came as key domestic rival Sony saw record demand for its new PlayStation 4 console, which had already sold more than 4.2 million units by the start of the year.

The console was launched on November 15.

US rival Microsoft has also seen robust demand for its Xbox One console, which sold more than one million units in the 24 hours after its November release.

For Nintendo, the latest forecast is especially disappointing after it scratched back to profitability in the six months to September thanks to a sharply weaker yen, which inflates Japanese firms' repatriated profits.

The company has previously blamed weak earnings partly on high development and marketing costs for the Wii U, although sales of its 3DS handheld console and related game titles fared better.

Nintendo, which cut prices for both products to shore up flagging sales, launched the Wii U in late 2012 with high hopes it would repeat the original Wii's blockbuster success.

But analysts said a lack of games took away some of the fizz the company had been hoping for after the 3DS the world's first video game console with a 3D screen that works without special glasses had initially suffered from disappointing demand abroad.

Sony, Nintendo and Microsoft are giants in the global videogames industry, but have faced tough economic conditions in their key US and European markets, while also fending off a challenge from cheap or sometimes free downloadable games for smartphones and tablets.

Nintendo's Tokyo-listed shares ended down 2.75 percent at 14,645 yen on Friday, before the firm made its announcement.