Gears of War 4 Review: Is This the Killer App for the Xbox One? 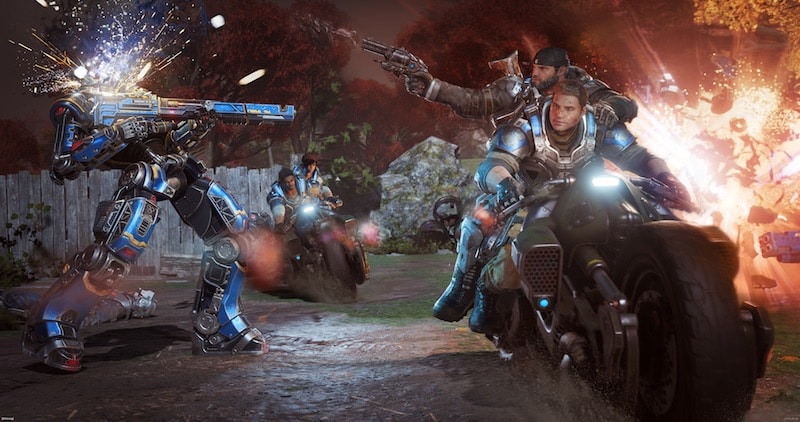 The last time we had a new Gears of War game was in 2013 - the divisive Gears of War Judgment - for the Xbox 360. It was a fun but flawed entry in a series that's seen better days.

Gears of War was the reason to buy an Xbox 360 and last year's Gears of War: Ultimate Edition - a remaster of the original - showcased what made the series so much fun to begin with. Is Gears of War 4 worth switching on your Xbox One or Windows 10 PC for, or are you better off taking a lancer bayonet to them instead? We find out.

The game features ridiculous set pieces that have you waging war in volatile conditions, such as wind flares - a heady mix of tornadoes and lightning - as you take on grotesque abominations hell-bent on ending you. Gears of War 4 feels like the most dynamic entry in the series to date. Aside from its grand action sequences and cut-scenes, the gunplay stands out, feeling a little less clunky than previous instalments.

Aiming feels just a little more precise, guns feel a little more accurate, while landing a bullet squarely in between the eyes of an enemy is always satisfying. These might not seem like big changes but franchise faithfuls will notice the increased fluidity almost instantly. The traversal is smooth too, and all of this makes the game a treat to play.

Furthermore, there are some new moves to your repertoire. You can ambush a foe while in cover with a quick melee attack, and have a host of weapons at your disposal. These include the series trademark lancer - a bloody combination of chainsaw and a machine gun - and newer tools of destruction like the drop shot and buzzkill. The former fires explosives under and over ground while the latter throws up saw blades that ricochet off surfaces. Series staple active reloading also makes a return. It lets you reload your guns faster with more damage by employing a well-timed tap of a bumper - turning a chore in other games, into engaging gameplay.

Tweaks and new weapons aside, the tone is as dark as ever and without spoiling much the story is pretty stellar. You'll take on the role of JD Fenix - the son of the original game's protagonist, Marcus Fenix. You're on a quest to uncover the mystery behind strange disappearances, and come face to face with enemies both old and new. For most part it ends up working well, with great banter between characters that end up lightening up its sombre setting and fleshing out some of its backstory.

Also of note is the game's pacing, which is near perfect. There are scenic open spaces that you'd wish you could ruin with an Instagram filter, and underground lairs that wouldn't be out of place in the most hellish of horror films. The visual variety is welcome and unfolds at a steady clip as do the game's many enemy types.

From menacing robots to gigantic arachnid-like foes, enemy design in Gears of War 4 is a joy to behold. Unlike some blockbuster hits of recent times, there's enough variety to keep the action from getting stale.

(Also see: Gears of War 4 Xbox One Disc Requires You to Download 11GB)

The game eases you into a steady flow of firefights punctuated by segments of exploration, mixed with occasional scenarios where you're protecting a key location by setting up turrets, barricades, and the like. These segments play like the franchise's Horde mode - having you fight off waves of enemies - and do a fine job of bookending specific chapters, and amping up the sense of tension.

And when you're done with the campaign, you can switch over to Horde mode or take on your friends in multiplayer. Or if you like, tackle the campaign all over again with friends in tow. In our experience, these modes worked as they should, though it will be interesting to see if the latency is as tolerable when the game hits a wider audience next week.

With highly polished core gameplay mechanics and a story that has you invested till the very end, it could have been enough to warrant a purchase. But Gears of War 4 goes beyond that. While we claimed that Forza Horizon 3 is the best looking game on the Xbox One, we have to say that Gears of War 4 supersedes it. So much so that we're left wondering how The Coalition has been able to eke out such gorgeous graphics from a platform that many deem “underpowered.” Which leads us to believe that the Windows 10 PC port - if devoid of the many quirks that Windows 10 is known for - might look even better.

(Also see: Gears of War 4 Beta Is Too Safe for Its Own Good)

Our solitary grouse is that while Gears of War 4 manages to give you a clear idea of what happened between the humans and locust horde on planet Sera, it doesn't do the best job of explaining some of the more immediate details, so some may find the beginning of the game a tad jarring. It won't matter that much when you're chainsawing enemy soldiers while dodging lightning and debris from a wind flare.

If you were worried that the series might have lost its way with Epic Games no longer developing it, rest easy. Gears of War 4 is the ultimate package of gory, visceral gameplay, and fantastic production values. This is quite definitely one of the best, if not the very best, games in the series.

We played a review copy of Gears of War 4 for the Xbox One. The game is available for Windows 10 PC and Xbox One on October 11 for Rs. 3,999