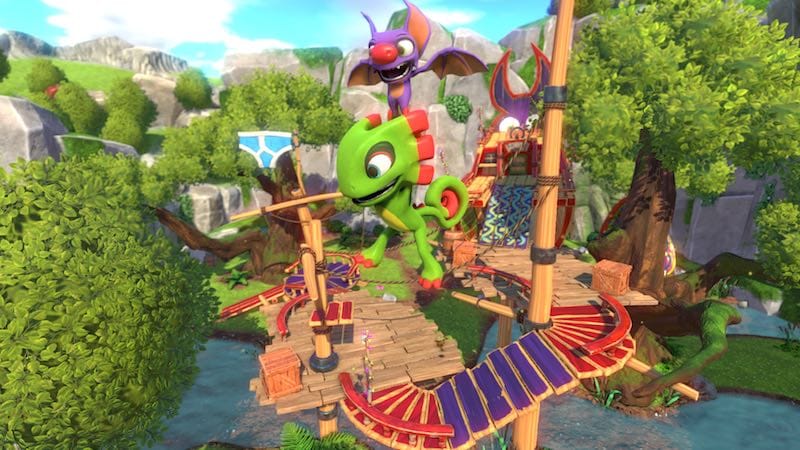 Yooka-Laylee is a throwback to the days when the Nintendo 64 was synonymous with 3D platformers, including one of the console's better franchises, the Banjo-Kazooie series, developed by Rare. That all changed after Microsoft bought Rare in 2002. The studio worked on a number of titles for Microsoft such as Perfect Dark Zero, and Viva Pinata, but we only got only more Banjo-Kazooie game, Banjo-Kazooie: Nuts & Bolts. but since then, Rare has only worked on the Xbox 360 dashboard, Kinect Sports, and the soon to be released Sea of Thieves.

To fill the void comes Playtonic. The studio is made up of ex-Rare staff, and it took the crowdfunding route to finance its latest game, Yooka-Laylee, which clearly bears its connection to Banjo-Kazooie on its sleeve. At the time, it became the fastest video game in Kickstarter history to reach $1 million (approximately Rs. 6.5 crore). Does Yooka-Laylee live up to the hype?

The game's titular protagonists, Yooka and Laylee, are a chameleon and a bat respectively. They find themselves in Hivory Towers, an industrial area where all the world's literature is being collected by the villainous Capital B and his henchmen, who are for converting it into pure profit. You control the heroic duo as they unlock tomes to other worlds, to prevent Capital B from carrying out his nefarious agenda.

The first thing that hit us about Yooka-Laylee was how colourful it looks. We've seen the likes of Super Mario Run and Mario Kart 8 sport a wide colour palette, but Yooka-Laylee takes it to another level. The art direction is superb and it looks every bit like the cover of a game box from the 90s, rather than the jagged mess that games from the early days of 3D platforms actually resembled. Yooka-Laylee wears its inspiration on its sleeve what with its menus and font screaming the bygone era.

Some of this is very welcome, particularly in terms of game design. You'll find yourself collecting a slew of items ranging from book pages, to in-game currency known as quills, which allow you to gain new moves. The game doesn't force you to head out in any single direction, giving you the opportunity to explore and discover its sprawling vistas, ranging from sinister factories to tropical jungles, on your own terms. This extends to other aspects of the game as well. You can unlock skills as you see fit (by obtaining more quills), explore a discovered world, or open up a new one (by spending pages), or just uncover every single element in a given area.

There is also the sheer number of things for you to do. From partaking in mini-games such as kart racing, to transforming into a plant in order to navigate other sections of a world, you can't fault Yooka-Laylee in terms of variety. Throw in responsive controls and a trouble-free camera, and there's a lot of fun to be had. The moment to moment gameplay of Yooka-Laylee is a treat.

For most part, all of this comes together swimmingly. Well, almost. Towards the end of the game some of its segments did tend to infuriate more than they should. Without spoiling anything, be prepared for a steeper than expected difficulty curve in the late game.

And when you look past the colourful trappings of Yooka-Laylee, some other annoyances also pop up. For one, there's the game's sound effects. The delivery of dialogue is in text (as opposed to voice overs in contemporary titles) and that's fine. But it comes with a cacophony of squeaks, barks, belches, and other such irritants that were synonymous of old school 3D platformers. They might have been whimsical additions then, but such "quirks" simply grate right now.

Furthermore, while the writing is consistent, whether you'll like it or not depends solely on your tolerance for puns, dad jokes, and potshots on current games industry woes. While we found it enjoyable and replete with laugh-out-loud moments, we can see how it could be seen as annoying for others. Some characters, such as Rextro — who resembles Nintendo's Yoshi, do tread possibly litigious ground but on the whole, we felt it to be a humorous affair.

Barring the odd frame rate drop, there was nothing much wrong with the game's technical performance either, at least on the Xbox One we reviewed it on.

Playtonic's adherence to the playbook of its past successes works well in Yooka-Laylee. Some minor quirks notwithstanding, it's proof that game design that's almost two decades old still works as well as some of the more avant garde, open-world fare that we've seen of late. If you're hankering for a slice of colourful, high-definition infused retro goodness, look no further.