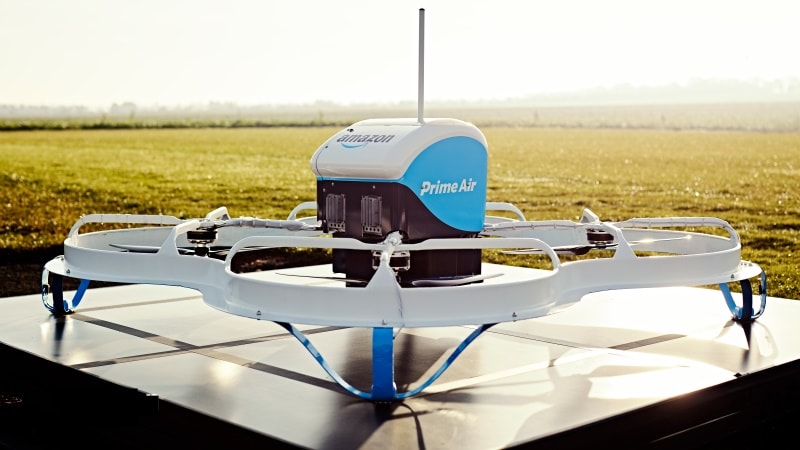 Amazon said Wednesday it completed its first delivery by drone, in what the global online giant hopes will become a trend in automated shipments by air.

The delivery to a customer near Cambridge, England, was announced in a tweet by Amazon founder and chief executive Jeff Bezos.

"First-ever #AmazonPrimeAir customer delivery is in the books. 13 min - click to delivery," he wrote of the December 7 order.

A video on Amazon's web page showed the delivery process - with a quadcopter drone delivering an Amazon Fire TV box and a bag of popcorn to a customer identified only as Richard B.

Amazon, which has been testing drone deliveries in the US and elsewhere, has on several occasions complained that the regulatory environment in the United States for these automated deliveries is more cumbersome.

In its video, Amazon noted that it is working with two customers receiving drone deliveries in the Cambridge area and soon hoped to expand to "dozens" near its warehouse.

Amazon is not the only group working on drone deliveries. Google parent Alphabet has a similar project known as Wing and some reports say US retail behemoth Wal-Mart is also studying drone deliveries.

In the US, the first commercial drone delivery was made in July when convenience store 7-Eleven, with drone startup Flirtey, transported a chicken sandwich, hot coffee and donuts to a customer near Reno, Nevada.

Project Wing announced plans this year to deliver burritos in partnership with US food chain Chipotle to students at Virginia Tech University, one of the campuses where drone research is being conducted.

US officials earlier this year announced the first steps in drone regulations, covering applications such as newsgathering and commercial flights over populated areas.

But the first set of rules stopped short of allowing some long-sought applications, including delivery of goods by retailers like Amazon in populated areas.

Amazon got British approval this year for flying drones that are no longer within sight of their operators in rural and suburban areas; having one person operate several highly automated drones; and testing devices to make the drones able to identify and avoid obstacles

The world's largest online retailer, Amazon raised eyebrows in late 2013 with its plan to airlift small parcels to customers by drone in select markets less than 30 minutes after orders are received.