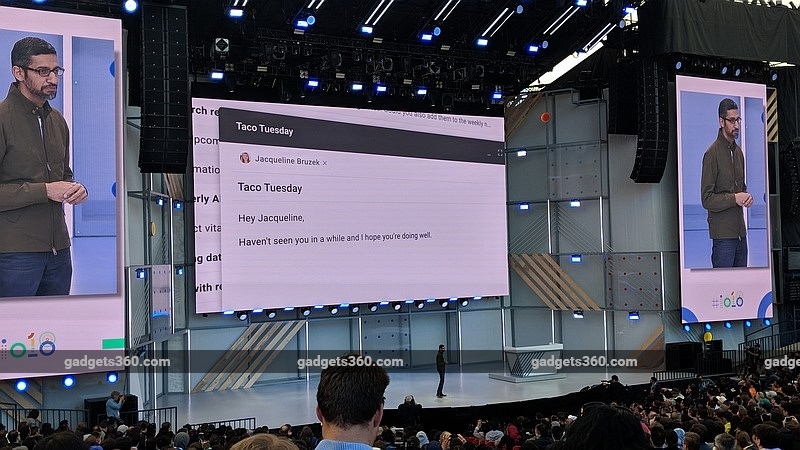 Smart Compose is Google's latest addition to its popular mailing client - Gmail - announced on Tuesday at Google I/O 2018. With the new feature, Gmail makes use of AI (artificial intelligence) and machine learning to offer phrase and word suggestions as you compose a new email. The suggestions will appear automatically once you begin typing the sentence. Smart Compose will be rolled out to Gmail for consumers in the next few weeks, and then to G Suite users in the coming months.

Google CEO Sundar Pichai at the annual I/O developer conference held at Shoreline Amphitheatre in California announced the incorporation of AI while composing emails on Gmail. Smart Compose has been designed to help users draft and send off emails faster than before. Gmail will take your email's subject into context. For instance, if the subject says "Taco Tuesday", Smart Compose will offer word suggestions such as guacamole and chips in the body. It will also help fill in saved information like names and physical addresses. If you think a suggestion can be used, press Tab to use it.

Late last month, Google announced a revamped version of Gmail across all desktop and mobile platforms. The update included several AI-based features such as Smart Reply, email snoozing, and nudging users to respond. It also has certain privacy-based aspects like a simplified risk warning, an easier way to unsubscribe from spam newsletters, and a new Confidential mode.

At the event, Google also announced the incorporation of AI in other products such as Google Photos and Gboard. In Gboard, morse code has been added to help differently abled users type on the keyboard; the feature is currently available in beta. As for Google Photos, a new feature called Suggested Actions helps give contextual shortcut actions to users based on their activity on the app. For instance, Google Photos will provide a shortcut to share photos with a friend when you are viewing multiple photos that have the same person in them.

We discussed Android P, Google Assistant, Google Photos, and also the most important things that Google did not mention during its I/O 2018 keynote, on Orbital, our weekly technology podcast, which you can subscribe to via Apple Podcasts or RSS, download the episode, or just hit the play button below.