Should You Buy an Nvidia 10-Series GPU Right Now? 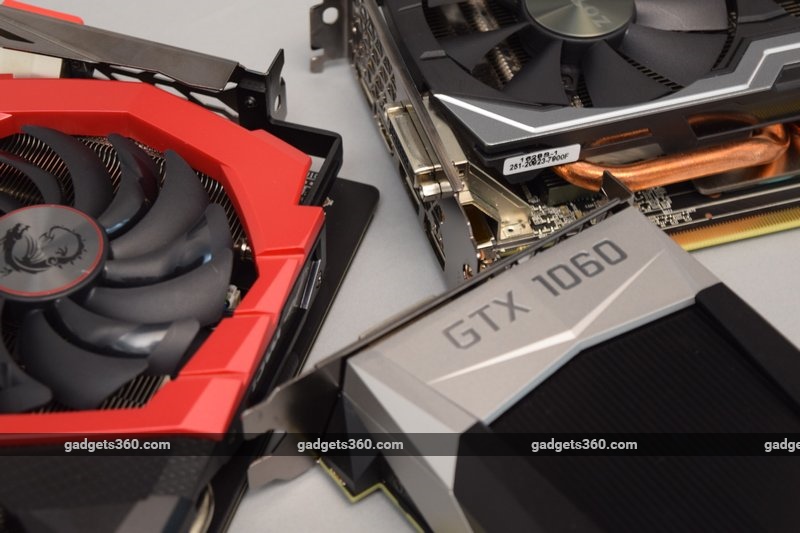 Many of Nvidia’s 10-series GPUs have been around for the better part of two years. While there have been leaked prototypes, hints from OEMs, and even graphics card component makers suggesting that an announcement for Nvidia’s next-generation GPUs is in the offing, is the GeForce GTX 10-series still worth buying right now? We find out.

Price, availability, and build quality
After checking with multiple retailers in Mumbai and Delhi as well as online, prices for some of GeForce GTX 10-series GPUs appear to have stabilised. A GeForce GTX 1060 6GB card is currently worth considering as it can play most AAA games at maxed out details at 1080p. A card from established brands such as Asus, Zotac, and even Nvidia’s own Founders Edition range available on the company’s own website would fall in the range of Rs. 24,500 to Rs. 27,500.

However, things aren’t great if you are looking at the high-end GeForce 1070 and 1080 models. While these are great GPUs for gaming at 1440p and above, they’re still cost-prohibitive outside of Nvidia’s Founders Editions. The GeForce GTX 1070 Founders Edition is currently priced at Rs. 33,000, and the GeForce GTX 1080 for Rs. 45,000 – tempting and much lower than what they were earlier, but not entirely the best option for reasons we’ll get into shortly.

While the wane in Bitcoin mining demand hasn’t seen a corresponding drop in prices, it has resulted in greater availability, retailers tell Gadgets 360. All variants are now easily available across brands - no surprise if you consider reports that Nvidia apparently overestimated demand from gamers and Bitcoin miners alike.

Right now if you’re looking beyond the GeForce GTX 1060, the only reasonably priced 10-series graphics cards are from Nvidia itself, especially in the case of the GTX 1070. Still, the Nvidia Founders Edition card does have some design quirks that prevent it from being a wholehearted recommendation. The silver metal GTX 1070 Founders' Edition shroud has more sharp creases and angles than previous generations' reference coolers did. It's also simplified the inside, with a relatively simple arrangement of heatsinks and heat-pipes coupled with a blower-style cooler.

Looking at lower cost options, the GeForce GTX 1060 Founders' Edition uses Nvidia's favoured blower-style cooler too and has silver and black accents similar to those of its higher-end siblings, but it isn't all metal and doesn't feel as premium. It looks like a full-sized graphics card, but the circuit board itself is actually quite a bit shorter with the cooler hanging over the end. Neither the GTX 1060 or 1070 Founders Editions are as efficient as other designs from partners such as Zotac and Asus, though you’ll have to pay a premium for those in the case of the 1070 as we mentioned earlier.

Due to Nvidia's use of a blower instead of multiple fans, both are noisier and heat up faster than their non-Founders Edition counterparts. If noise isn't a concern, and you don't plan to overclock, they're worth considering on price alone.

With availability seeming to correct itself, we could see a price drop from Nvidia’s partners in the coming weeks, opening up options beyond Nvidia’s Founders Edition range. It will be interesting to see which OEMs do this, and by how much.

Nvidia 11-series rumoured specifications
It’s widely believed that Nvidia will announce new GPUs soon. As per sources familiar with Nvidia’s supply chain, these would be high-end variants, perhaps with 11-series branding, such as GeForce GTX 1170 and GeForce GTX 1180. Rumours also suggest that these will use a new architecture called Turing, instead of Volta, as previously expected and presently used in Tesla and Titan V plus supercomputer/ AI projects. It’s a claim that a Lenovo representative made at E3 2018. That said, leaked benchmarks indicate the possibility of 2000-series branding while an image of a leaked prototype doing the rounds could very well be an 1180 chip.

Aside from a new architecture and pricing, the new GPUs from Nvidia will almost certainly use brand new GDDR6 memory versus the GDDR5 on the GTX 10-series, allowing for greater efficiency and lower power consumption. High-end graphics cards with up to 16GB of RAM could also be available. Hardware configurations notwithstanding, we can speculate that the high-end GPUs will have new capabilities like ray tracing, that could add another level of photorealism to video games. Considering how well GeForce GTX 10-series cards perform in most games, it will be interesting to see what Nvidia chooses to push with its next generation. Perhaps some Geforce Experience-exclusive features?

Should you buy a Nvidia 10-series GPU right now?
In most existing games, the performance of the 10-series range is pretty solid, particularly at 1080p and 1440p with the GTX 1060 and GTX 1070 respectively. Plus there are regular driver updates with each new game. This results in a reasonable line of support in the form of timely release of drivers for every major batch of fresh games to hit the PC, something the competition rarely matches.

Now some - including a study commissioned by, well, AMD - say that AMD's drivers are more stable and the user interface for its software 'Radeon Software Adrenaline Edition' matches Nvidia's GeForce Experience in terms of basic feature set, allowing you to share and stream your games, but it's not as intuitive to use and lacks some more advanced features like Ansel, which allows you to take 360 degree screenshots in-game complete with a variety of filters.

At the moment you can’t go wrong with the 10-series if you’re upgrading from a 9- or 7-series card, or if you’re building a brand new machine. If you’re not picky about the kind of cooling used, the Founders Edition options from Nvidia itself could serve you just fine. There’s enough headroom if you’re playing at 1080p or 1440p to suggest either a GTX 1060 6GB or a GTX 1070 if your budget permits.

If you were considering any of Nvidia’s entry-level offerings such as the GeForce GTX 1050 or 1030, they’re great for e-sports titles like Overwatch and Counter-Strike: Global Offensive, but they won’t exactly let you push visual fidelity in the way newer games like Assassin’s Creed Origins or Final Fantasy XV do. At that level of hardware, you won’t be able to hold a steady 30fps in such titles without making compromises to their settings, ruining the experience. So unless all you do is play competitive games like Dota 2 or Overwatch, they’re not exactly your best choice.

On the other hand, if you’re gaming 4K or beyond, we’d recommend waiting it out to see what Nvidia has in store for us in the months to come. Even with the current prices of anything above a GeForce GTX 1070, value for money should be improved with whatever Nvidia announces.