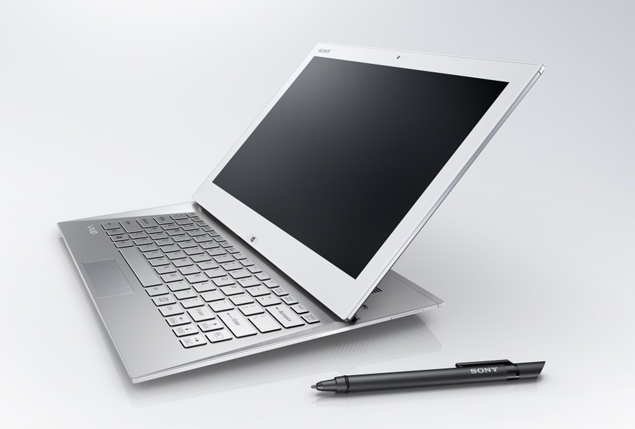 All three portable devices are powered by the new fourth generation of Intel Core processors and will be available in options up to Core i7. One significant feature of the newly launched devices is the presence of Near Field Communication (NFC) that is not generally seen on devices of this segment.

Carrying forward the slider design of its predecessor, the VAIO Duo is as a laptop that becomes a tablet when you slide the screen. One major drawback in the Duo 11 was the absence of a proper touch pad as it had a tiny optical trackpad cramped between the keyboard. That flaw is gone in the Duo 13, as the hybrid comes with a proper trackpad.

Sony claims that the device is sleeker than the Duos 11 and despite the bigger size, weighs the same at 1.32 kgs. The two-in-one is encased in carbon fiber and comes with an 8-megapixel rear camera. Sony is providing a CamScanner software with the PC, to let the camera double up as a document scanner. For professional purposes, such a feature might just come in handy.

Like the previous model, the sliding hybrid does come with a stylus, but unlike the former there is finally space on the device to place the same. Like the Samsung Galaxy Note 10.1, as you remove the stylus from the device, the screen wakes up. Sony is also shipping the hybrid with applications to support the pen. One can take notes in the memo taking application, Note Anytime for VAIO or easily crop an image with Active Clip using edge detection technology.

The machine comes with Sony's TRILUMINOS Display for mobile that offers a full HD display.

The VAIO Pro 13 is also the first notebook PC on the market to include a high speed PCIe SSD drive, instead of traditional SSD drives.

The three devices will be available in the United States starting June 9 in Carbon Black and Carbon Silver colours. The VAIO Pro 11/13 models will retail at about $1149 and $1249 while the VAIO Duo 13 model is priced at $1399.

According to Sony, the VAIO Duo 13 and VAIO Pro 13/11 will be available worldwide, starting with select countries from the middle of June. Hence, we can expect an Indian release for the products pretty soon.
Comments