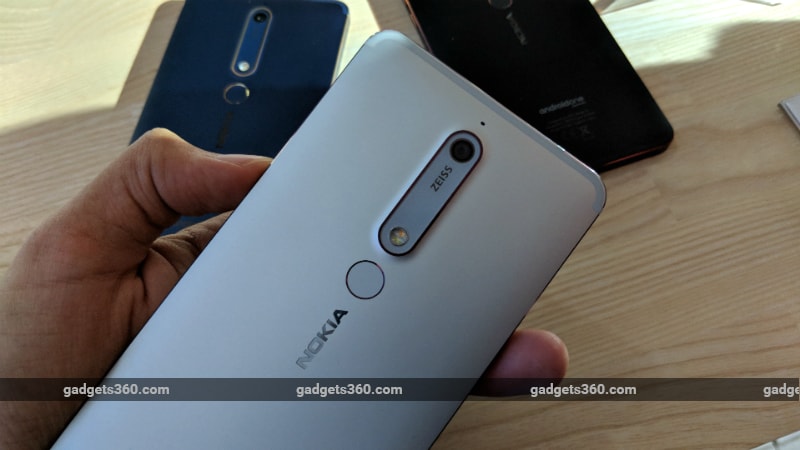 HMD Global entered India in June last year with the launch of the Nokia 3, Nokia 5, and Nokia 6

HMD Global is among the emerging players in the Indian smartphone market. The Finnish company owns the license to iconic Nokia brand that doesn't need any introduction, especially to customers in India. To give a nostalgic feel to Nokia fans in the country, the company relaunched the iconic Nokia 3310 last year and now the company has unveiled the Nokia 8110 4G, which is also informally called the 'Banana Phone'. Alongside, the company also launched the Rs. 11,499 priced Nokia 3.1 Plus as its latest budget smartphone. HMD faces tough competition in the Indian smartphone market, which has seen the top few companies garner a large share of the market in recent quarters, leaving very little room for the smaller players. Nevertheless, Ajey Mehta, Vice President and Country Head — India, reveals that the journey of HMD Global in India has so far been "very energising" and a "good growth story".

"HMD Global has been built purely on partnerships," Mehta told Gadgets 360 in an interview on the sidelines of the Nokia 3.1 Plus launch event in New Delhi on Thursday. "We have the brand from Nokia, we have the engineering and manufacturing from Foxconn, we have done an Android One tie-up with Google, we have exclusive distributors who can be an extension of ours. So our whole approach to execution has been from an asset-light approach, and we continue to do that."

The asset-light approach has indeed helped HMD Global bring the Nokia brand firmly back in focus. Mehta notes that it enabled the company to grow its presence in the market despite having a lean team. "We have our sales force that is out there, we have our marketing, after sales, and we are still a very lean team," the executive states. "But because we have partnerships, we can multiply our presence and our forces in the market. That's how we continuously try and work ourselves."

HMD Global started its smartphone journey with the Nokia brand in December 2016, though it entered the Indian market in June last year with the launch of the Nokia 3, Nokia 5, and Nokia 6. As the company expanded its original portfolio of smartphones from just three to 12 models, it lately upgraded its naming scheme from merely numbers to prefixes and suffixes. The company also chose an online-offline mix for selling its different models in the country. Mehta highlights that opting for the mix instead of being present only through online marketplaces or via offline retailers has helped sustain the brand in the price-competitive market. "We need to have a very portfolio approach to our business," he tells Gadgets 360. "You can't afford to drop all the prices. Similarly, you can't afford to price yourself out of the market. You need to pick and choose your warriors and put all your efforts behind them and then go forward. That's our approach.”

"We're picking two or three products which will be our warriors that will go and fight out there and the rest of it, of course, will then be the product that will be the bedrock of the growth story that we have," he adds.

Mehta says the company has seen the offline distribution lifecycle continues to be longer in India. "Three-four months maybe you'll have an online spike. There also may be few options that last longer, but in general, online is based on specs, technology, and very quantifiable left brain features of a product," he says. "Offline, on the other hand — is also left brain to some extent in terms of some basic specs and some basic cost etc. — but a lot is around a retailers' interaction, a lot is around the design, and a lot is around the experience at the point of sale. So there's a lot more that hinges on your experience when it comes to offline.”

"Therefore, online I see as a shorter lifecycle, it ramps up fast, but it falls up also reasonably fast, whereas in offline, it ramps up slowly, but it has legs for a longer period of time,” he adds.

Mehta also asserts that the devices that tend to be available through an online channel mostly need to be specifications-heavy to attract customers. "It is logical as when you're going online, you don't really have much opportunity to experience so you go purely by specifications and you have the compare option. So you put your five devices and compare them and then you just see which one has better specifications among all," he notes.

HMD Global has additionally learnt from its brief journey in India that there is a need to tweak the strategy on the fly to meet the fast-growing environmental changes. "I do see some consolidation in the industry so you see the top four or five players accounted for a larger share [than the other players], which means you need to be able to fight the larger players - not just take the long tail," says Mehta. He also adds that the tactical move to find one USP on which to market the product is vital to take on the competition. "You've been at par with all and have one that you can drop over," he explains. "These are little tactical moves we have made in our approach to selling these devices to be able to hit the numbers that we have today."

According to a recent report by Counterpoint Research, HMD Global saw a whopping 782 percent year-over-year growth by shipping 4.5 million smartphone units worldwide in the second quarter of this year. That achievement has already brought the Nokia brand custodian to the list of top 10 smartphone vendors. Moreover, Tarun Pathak, Associate Director, Counterpoint Research tells Gadgets 360 that in the third quarter, HMD Global is expected to have captured two percent of the Indian smartphone market. And with models such as the Nokia 3310 and Nokia 8110 4G — among others — the company is expected to have a six percent share in the feature phone market.

"I think some sections of users find it interesting to have these as companion devices and that is the reason we have seen 3310 doing well to early," says Pathak. "The design change on the Nokia 5.1 Plus and Nokia 6.1 Plus models was also appealing."

Mehta underlines that HMD Global is already on track to expect a spike in its sales during the festive period along with some significant growth over the previous quarter thanks to its widened portfolio and a host of other partnerships. "We have worked out consumer offers — be it attractive consumer finance packages, operator packages, or just other consumer promo packages, because we've had some tied up with some other ecosystem partners," he says. "We've also tied up with retailers for retail offers. We've also had some very aggressive retail offers for selling our portfolio. You'll also see us on-air — be a digital, social, or television. We have tied up with some assets that you'll hear about in the next couple of days like we did tie up with IPL to get us on to that scale and visibility. So we have full a 360 approach to the festive period because we do believe that we can take our business to the next level."

Concluding the conversation, Mehta tells Gadgets 360 in a confident tone that HMD Global wants to be "amongst the top three” smartphone vendors in the next three to five years. "That is clearly one of our targets," he comments.

"HMD Global has brought in some good devices in the price brackets, which were not well served earlier, and has started becoming visible as well," says Faisal Kawoosa, Founder and Principal Analyst, TechArc. "However, I see its two USPs — well built of hardware and the pure Android experience. In terms of well built of hardware, I would also put Honor in the same league, while for Nokia's stock Android proposition, there are now several brands offering the same experience. So HMD may have to come out more precisely with what is its product philosophy which is distinct and unique from others."

Kiranjeet Kaur, Senior Research Manager at IDC's Asia/Pacific Client Devices Group, says HMD Global has had a strong start in India, which is its biggest market now, where the Nokia brand still holds a lot of value within the channel as well as the consumers. However, Kaur points out that the nostalgia and the strength of the Nokia brand didn't strike a chord in other major countries where HMD re-entered in the recent past. "This becomes a bigger challenge as HMD tries to scale up its volumes when at the same time Chinese players like Xiaomi, Oppo, Huawei are also on an expansion spree,” says Kaur. "One of Nokia’s biggest strengths in the past was its distribution reach, but with channel landscape undergoing a shift in many of these countries, it becomes imperative for HMD to think along new lines and play to its strengths."