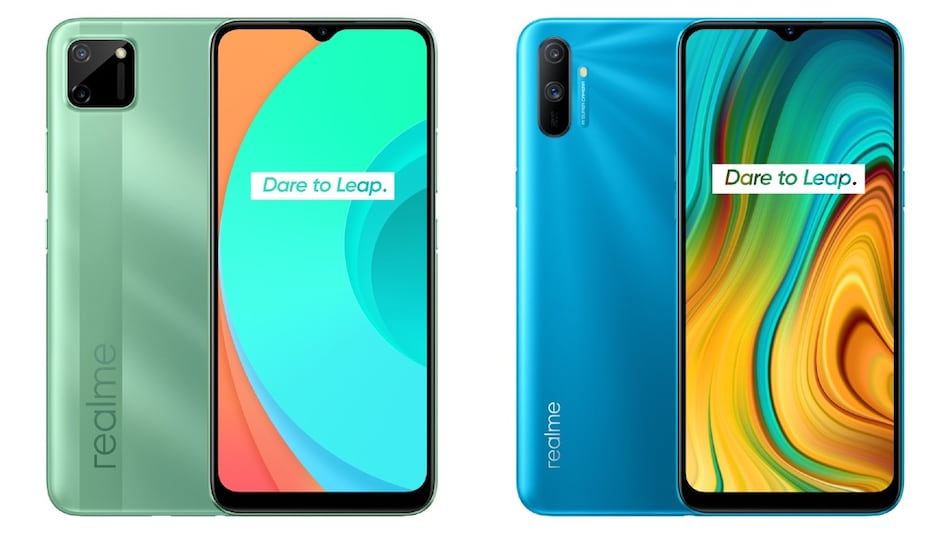 Realme C11 debuted on Tuesday as the company's latest budget phone. The new smartphone comes with a fresh design and includes a dual rear camera setup. It also packs a 5,000mAh battery that supports reverse charging. Further, the Realme C11 comes with a waterdrop-style display notch and comes with 32GB of onboard storage. Key features and specifications of the Realme C11 make it quite closer to the Realme C3 that was launched in February. Thus, we are here comparing both phones to highlight their major on-paper differences as well as similarities.

The Realme C11 price in India is set at Rs. 7,499 for the 2GB RAM + 32GB storage configuration. The phone comes in Mint Green and Pepper Grey colours. Furthermore, it will be available for purchase in the country starting July 22.

In contrast, the Realme C3 price in India currently starts at Rs. 8,999 for the 3GB RAM + 32GB storage option, while its 4GB RAM + 64GB storage model carries a price tag of Rs. 9,999. The phone has Blazing Red and Frozen Blue colour options.

To recall, the Realme C3 was launched with a starting price of Rs. 6,999, though it received a couple of price hikes in the recent past.

The Realme C11 and Realme C3 both come with dual-SIM (Nano) support and run on Android 10 with Realme UI on top. The phones also feature a 6.5-inch HD+ (720x1600 pixels) display with 20:9 aspect ratio and 88.7 percent screen-to-body ratio. You'll also get the waterdrop-style display notch on both phones. However, the Realme C11 is powered by an octa-core MediaTek Helio G35 SoC, coupled with 2GB of RAM. The Realme C3, on the other hand, has an octa-core MediaTek Helio G70 SoC, paired with up to 4GB of RAM.

The Realme C11 and Realme C3 both also come with a 5-megapixel selfie camera sensor at the front, along with an f/2.4 lens.

On the storage part, the Realme C11 has single, 32GB of onboard storage, while the Realme C3 has 32GB and 64GB storage options. Both phones also come with a microSD card slot.

Connectivity options on both Realme C11 and Realme C3 include 4G VoLTE, Wi-Fi 802.11 b/g/n, Bluetooth v5.0, GPS/ A-GPS, Micro-USB, and a 3.5mm headphone jack. Sensors on both phones include an accelerometer, ambient light, magnetometer, and a proximity sensor. Both phones also pack the same, 5,000mAh battery.