Realme C3 Getting Android 11-Based Realme UI 2.0 Update in India 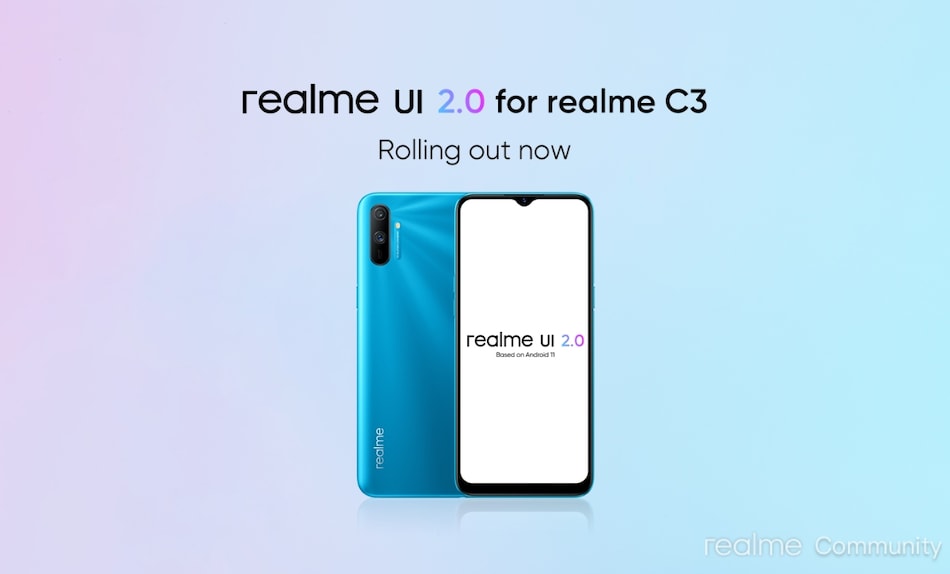 Realme C3 is getting a stable version of the Android 11-based Realme UI 2.0 update in India. The update changelog mentions a host of new features, bug fixes, and improvements that can be categorised under personalisations, system, launcher, security and privacy, games, and more. The update changelog, however, doesn't mention any bundled Android security patch. This is the second major software update for Realme C3 as the smartphone, when launched in February 2020, came with Android 10-based Realme UI out-of-the-box.

Through a post on its community forum, Realme announced the Android 11-based Realme UI 2.0 update for Realme C3 (Review). The changelog mentions many new Android 11-based features that the smartphone will be getting. Realme C3 users will be able to use third-party app icons for the home screen. There are also three new Dark Modes — Enhanced, Medium, and Gentle. The display contrast can also be adjusted automatically according to ambient light. The smartphone also gets new weather animations.

Users will now be able to remove a folder or combine two. Realme C3 gets an App lock toggle in the Quick Settings menu. Users will now be able to share their location with specified contacts with a 'Low Battery Message' when the charge is less than 15 percent. Users also have the option to change the way they summon the Game Assistant. It is now easier to share personal hotspot with others via a QR code.

The HeyTap Cloud will let users back up media, documents, system settings, more for easier migration to another smartphone. Realme C3 gets an inertial zoom feature as well as the level and grid feature for its video camera. The new sleep capsule feature lets users schedule their downtime and secure their sleep time.

The firmware version with the update RMX2020_11.C.04 and it is worth mentioning that users would need to be on RMX2020_11_A.63 firmware version to get the update. The update will be rolled out in phases and should reach all Realme C3 smartphones soon. Keen users can manually check for the update by heading to System > Software update. The size of the update isn't mentioned but users are still recommended to update the smartphone while it is connected to a strong Wi-Fi connection and is put on charging.