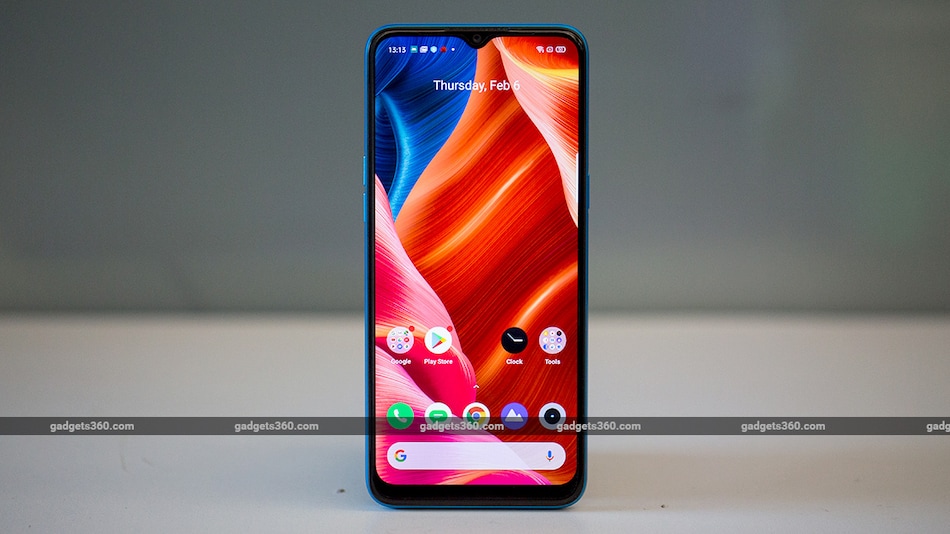 Chinese smartphone maker Realme had an eventful year in 2019. The company launched multiple smartphones every quarter forcing the competition to pick up the pace. Realme started 2020 with a budget smartphone called the Realme 5i, and hot on its tail, the company is bringing in yet another very affordable smartphone called the Realme C3. The C series is Realme's entry-level lineup, and offers good hardware at affordable prices. In this highly competitive price segment, can the Realme C3 carve out a niche of its own? We put the new Realme C3 to the test to find out.

Realme has opted for a new look for 2020 that it calls the Sunrise design. We've seen it on the Realme 5i (Review), and it is now being used on the Realme C3 as well. The company offers the Realme C3 in two colour options: Frozen Blue and Blazing Red. We have the former for this review. The colour is definitely catchy, appearing to radiate outwards from the camera module, and the back has a texture that you can feel when you run your fingers over it.

Realme has equipped the C3 with a bigger display than its predecessor. It measures 6.5 inches diagonally and has a 20:9 aspect ratio. This aspect ratio makes the smartphone tall and slim, so it's relatively comfortable to hold and use. The bezels are thin on the sides but the bottom chin is thicker. Like most other Realme smartphones in the market, this one also has a dewdrop notch which houses the selfie camera. Right above it is the earpiece, which is finished in black and blends in with the display.

The frame of the smartphone is made out of plastic. The power button is on the right while the volume buttons are on the left. We found these buttons to be well positioned, but they're recessed into the frame a bit which can make them hard to find by feel. Once pressed, these do have solid feedback.

The SIM tray on the Realme C3 is just above the volume buttons on the left, and has individual slots for two Nano-SIMs as well as a microSD card. At the bottom, this phone has a Micro-USB port, 3.5mm audio jack, and a loudspeaker grille. Realme could have offered a USB Type-C port, as the competition has started offering this in the budget segment. The top of the device is completely blank.

From the back, this phone looks very similar to the Realme 5i. This model also has a protruding camera module at the back, which houses two camera sensors. Realme has added a metallic rim around this camera module to help keep the lenses from getting scratched. The Realme C3 packs a 5,000mAh battery which is excellent for a smartphone at this price, but it does bring the weight of the device up to 195g.

The Realme C2 (Review) used a Mediatek Helio P22 SoC, and while that was a good processor for the price, it was dated even at the time of that model's launch. The Realme C3 sports the new MediaTek Helio G70 SoC, which is an octa-core processor clocked at 2.0 GHz. The C3 is offered in two variants - the base variant sports 3GB of RAM and 32GB of storage while the higher one has 4GB RAM with 64GB of storage. Realme has priced these two options quite well, with the base variant coming in at Rs. 6,999 and the higher one priced at Rs. 7,999. You do have the option to expand storage using a microSD card.

The Realme C3 is a dual SIM smartphone with support for 4G as well as VoLTE. Connectivity options include Bluetooth 5, Wi-Fi, five positioning systems, and the usual sensors. Just like the Realme C2, the C3 does not have a fingerprint scanner. We have seen a leak recently which suggested that a version of this phone called the Realme C3s could be launched sometime in the future, but we don't know if or when it might come to India.

The Realme C3 runs Android 10 out of the box.

Software is where Realme has taken a new direction. The Realme C3 no longer runs ColorOS like its older siblings, instead, it runs RealmeUI V1.0 which is based onAndroid 10. This is the first smartphone from the company to ship with Android 10 out of the box. Our unit was running the December security patch, which is acceptable.

The new RealmeUI is very similar to ColorOS 7 and introduces a lot of changes compared to what ColorOS 6 offered. The overall UI is similar to stock Android and we like the layout. There is still some amount of bloatware, which includes Facebook, Helo, Dailyhunt, Gaana, Opera News, UC Browser, and a few Realme apps. The smartphone also has an App Market store which is an alternative to the Google Play Store.

Swiping right from the home screen does not take you to the smart assistant anymore, but there is no Google Assistant screen here either. Universal search is still available, and one simply has to swipe down on the home screen to access it.

Realme also offers Dark Mode, and it is no longer an experimental feature like it was on the Realme 5i. There is Focus Mode as well, which can be enabled from the notification shade. Enabling Focus Mode stops notifications from distracting you for a fixed duration, and lets you play relaxing sounds to help focus better. We found it to be helpful to some extent, but the number of relaxing sounds is limited and we found a few of them to be distracting.

Just like other Realme smartphones, this one also features Game Space, which helps you block calls and notifications while gaming. Realme is also advertising a Personal Information Protection feature that spoofs blank or dummy information when apps request access to your call history, contacts, and messages.

We were expecting average performance from the Realme C3 considering that it is a budget smartphone. However, the device does pack a punch, delivering good performance. We did not notice any lag while scrolling through the menus and while multitasking. Our review unit had 4GB of RAM and it could multitask fairly easily without needing to kill apps in the background.

We set up face recognition on the device and found it quick to unlock the smartphone in different lighting conditions. The display gets bright enough when outdoors but the viewing angles could have been slightly better.

To test this new processor, we ran our usual set of benchmarks on the device. Surprisingly the Realme C3 managed to score 192,187 in AnTuTu which is higher than the scores of the much more expensive Samsung Galaxy A51 (Review) and Oppo F15 (Review) which we recently tested. In Geekbench 5's single-core and multi-core tests, the phone scored 354 and 1,260 respectively. To get an idea of graphics performance, we ran the GFXBench T-Rex and Car Chase benchmarks, and rhey ran at 51fps and 14fps respectively.

We played PUBG Mobile on the Realme C3 and it defaulted to the High preset with graphics set to HD and frame rate set to High. We did notice occasional stutter at these settings and the game worked better when we turned them down. The Realme C3 did get slightly warm to the touch after playing for 15 minutes at the High settings.

This phone packs in a big 5,000mAh battery which delivered excellent battery life. It lasted us for close to two full days on a single charge with our usage which consisted of playing a few games, using an active WhatsApp account, and running Google Chrome to browse the Web. In our HD video loop test, the smartphone lasted for an incredible 28 hours and 20 minutes, which is among the longest we have yet seen from any smartphone in this test. While the big battery is a boon, Realme should have offered fast charging abilities on this phone. The 10W charger that you get in the box takes over two hours to charge the smartphone completely.

The Realme C3 sports a dual-camera setup at the back consisting of a 12-megapixel primary shooter with an f/1.8 aperture, and a 2-megapixel depth sensor. At the front, it has a 5-megapixel selfie shooter. The camera app is unchanged compared to previous Realme phones, and has Portrait, Time-lapse, Slo-mo, Expert, and Pano modes in addition to the photo and video modes. It also has quick toggles for HDR and Chroma Boost as seen on older Realme devices.

When taking pictures in daylight, the Realme C3 was quick to lock focus and did a fair job of metering light. Photos looked good on the phone's screen, but we noticed a lack of detail after zooming in. However, quality is better than what some of the other smartphones at this price point can produce. For close-ups, we noticed that the Realme C3 struggled to lock focus when too close to a subject. There were also occasional focus hunting issues. Once focused, the Realme C3 does deliver a decent shot.

The Portrait mode puts the secondary depth camera to use and the smartphone gives you the option to set the level of blur before taking a shot. The Realme C3 managed good edge detection but we found the output to be flat.

In low light, the Realme C3 produced average photos. These lacked detail and weren't very sharp. Realme's official website initially listed a Super Nightscape mode but we didn't find it in the camera app. When we enquired about this, a Realme representative confirmed to Gadgets 360 that it was a mistake and that this model does not support any such feature. The website has since been corrected.

Selfies taken outdoors in daylight had a slightly inaccurate colour tone. They also weren't sharp, and lacked detail. Video recording maxes out at 1080p for both the primary as well as the selfie shooter. There is no video stabilisation, resulting in shaky footage. In low light, the Realme C3 metered light well for a phone at this price.

The Realme C3 is a solid update to the Realme C2, and it further strengthens the company's budget series. Realme has picked a powerful SoC that steamrolls the competition when it comes to performance. Battery life is excellent as expected, and Realme smartphones have been consistently acing our battery tests. Of course, camera performance isn't the best, but it is acceptable for the price.

Starting at just Rs. 6,999 for the base variant, and at Rs. 7,999 for the variant we reviewed, the Realme C3 is an easy smartphone to recommend. Realme could have offered a fingerprint scanner like most of its competition, and we would like to see USB Type-C become standard.