Huawei Mate X2 is rumoured to come with a HiSilicon Kirin 9000 SoC. 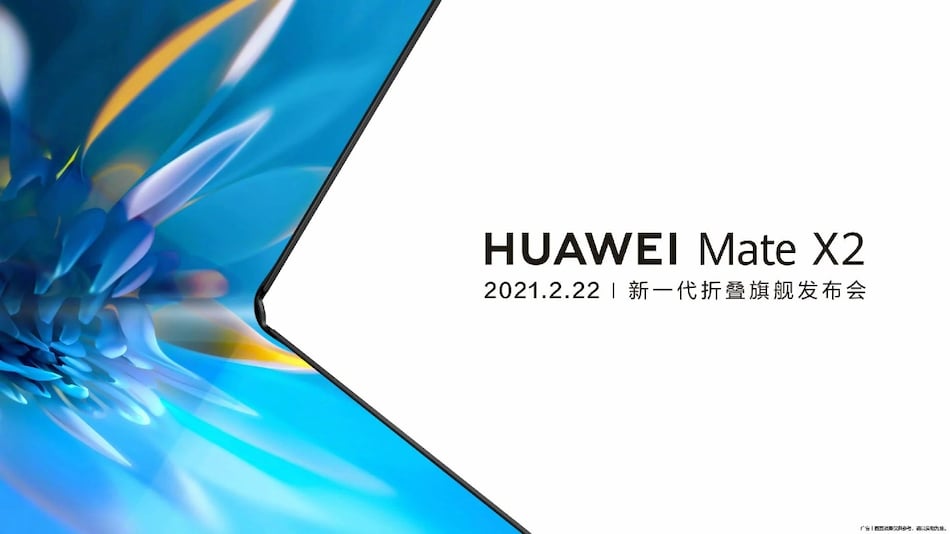 Huawei Mate X2 launch date is set for February 22, the Chinese company revealed on Weibo on Wednesday. The new foldable smartphone will be the successor to the Huawei Mate X that was launched in 2019 as Huawei's answer to the Samsung Galaxy Fold. Unlike the Mate X that debuted with an out-folding design, the Huawei Mate X2 appears to have an inward-folding design — similar to the original Samsung Galaxy Fold and the Galaxy Z Fold 2. You can also expect an all-new HiSilicon Kirin SoC on the new smartphone.

Huawei hasn't yet provided any details around the specifications of the Huawei Mate X2. However, the rumour mill has already suggested some internals. The phone also allegedly surfaced on China's TENAA with model numbers TET-AN00 and TET-AN10.

Last month, a tipster claimed that the Huawei Mate X2 would come with an 8.01-inch (2,480x2,200 pixels) inward-folding display and a 120Hz refresh rate, along with a secondary 6.45-inch (1,160x2,270 pixels) display. The phone is also said to have Huawei's HiSilicon Kirin 9000 SoC and include a 4,400mAh battery with 66W fast charging. It is also rumoured to have a quad rear camera setup with a 50-megapixel primary sensor. Further, the Huawei Mate X2 is said to have a 10x hybrid zoom and a 16-megapixel selfie camera. The smartphone is also speculated to run on Android 10.