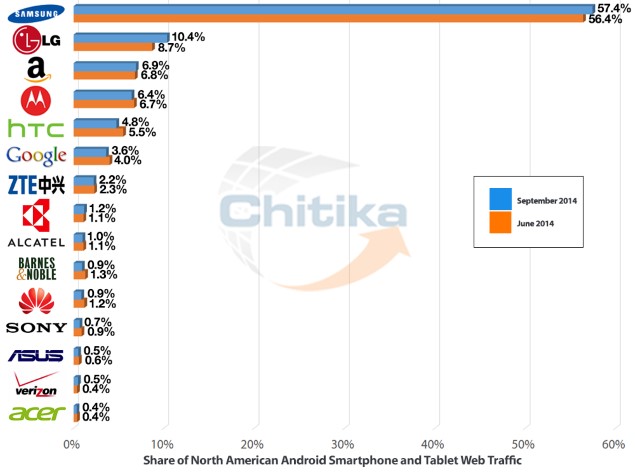 According to a recent Android Web traffic distribution report, LG has recorded the largest usage share growth from June to September, with 1.7 percent, compared to other Android smartphone or tablet brands in the US and Canada.

The Q3 Android Web traffic distribution report, released by ad network Chitika on Tuesday, indicates LG's user share grew to 10.4 percent in Q3, up from 8.7 percent in the previous quarter. Chitika reports LG's Q3 growth is continuing a trend for the company in the US and Canada, and it had posted a usage share jump of 0.6 percent between March and June.

Chitika points to strong sales of the LG G3 success as the likely contributor for the company's recent usage share jump. Notably LG had launched the G3 smartphone in May, and announced it would shortly exceed the 10 million sales mark in August.

Samsung at the end of Q3 is still leading the space a market share of 57.4 percent, an increase of 1 percent from 56.4 percent at the end of Q2. Chitika attributes summer discounts on the Galaxy S5 as the likely contributor to growth.

The report also suggests that there is a huge gap between the traffic from smartphones as opposed to tablets, with the current 81 percent to 19 percent split widening by 2 percentage points since the last study in June by Chitika. The report also reports the comparative Web traffic share of Android and iOS, with the latter commanding 65 percent in Q3.
Comments

Samsung Galaxy Note 4 vs. iPhone 6 Plus Battle to Commence in India This Friday
Google Glass Can Now Show All Notifications From Your Android Phone