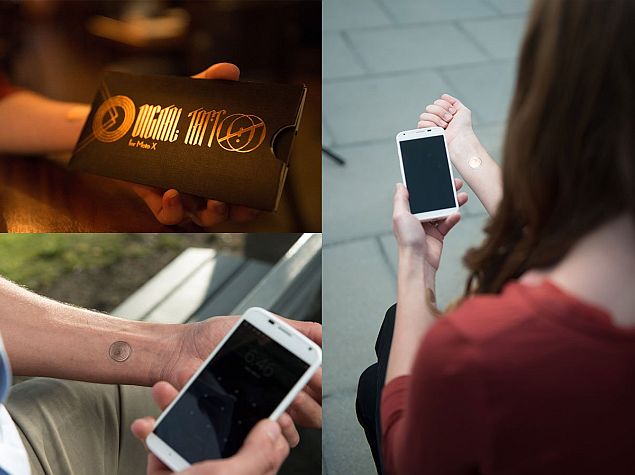 Motorola on Tuesday announced the launch of the digital tattoo method of identification for its Moto X (Review | Pictures) handset, a tattoo sticker made out of "super thin" material that unlocks the smartphone without typing any passwords or drawing any patters.

Made by VivaLnk Inc. and Google's Advanced Technology and Projects group, the $9.99 NFC-operated digital tattoo is round and nickel-size, that sticking to the human skin with the help of an adhesive material and lasts for five days. The adhesive material is designed to tackle activities like jogging, showering and swimming.

The users would simply have to tap the Motorola Moto X's back side to the digital tattoo to unlock the smartphone. The whole process takes place over NFC connectivity.

"It's another step in making it easier to unlock your phone on the go and keep your personal information safe. An average user takes 2.3 seconds to unlock their phone and does this about 39 times a day-a process that some people find so inconvenient that they do not lock their phones at all. Using NFC technology, digital tattoos make it faster to safely unlock your phone anywhere without having to enter a password," said the Motorola blog post.

Regina Dugan, who created and heads the Google Advanced Technology and Projects group that was formerly part of Google-owned Motorola Mobility, announced the digital tattoo technology back in May last year. She was most recently named to Zynga's board of directors.