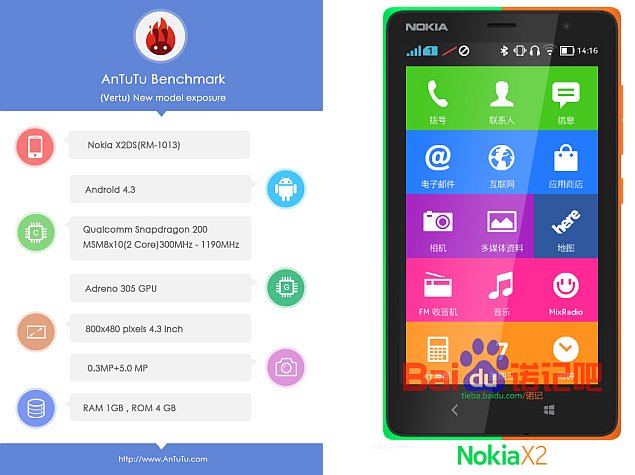 A device with model number Nokia X2DS (RM-1013) is currently listed on the AnTuTu benchmark site along with some detailed specifications.

After reports of an AnTuTu benchmark listing of the alleged successor to the Nokia X smartphone, the Nokia X, now the actual listing (via G for Games) of what seems to be a Nokia X2 Dual SIM smartphone with model name Nokia X2DS (RM-1013) has been spotted on the AnTuTu benchmark.

Earlier this week, the alleged Nokia X2 was reportedly spotted with a 1.2GHz quad-core Qualcomm Snapdragon MSM8210 processor, 1GB of RAM, and 4GB of built-in storage. Now, with the new listing of what seems to be the anticipated Nokia X2 Dual SIM (RM-1013), we have a lot more specifications listed.

The AnTuTu benchmark listing of the Nokia X2DS (RM-1013) shows the device running Android 4.3 on a dual-core MSM8x10 processor capable of clocking up to 1190MHz, alongside an Adreno 305 GPU and 1GB of RAM.

Other specifications listed on the alleged Nokia X2 Dual SIM AnTuTu benchmark include a 4.3-inch display with a 480x800 pixel resolution, a 5-megapixel rear camera, and a 0.3-megapixel front-facing camera. An overall AnTuTu score of 11827 is also visible, matching the previous AnTuTu leak precisely.

Notably, like with the alleged Nokia X2 specifications leak earlier this week, the AnTuTu benchmark listing has been accompanied by an image of the smartphone shared by a Baidu account, one that quite plainly features a home button (in the shape of a Windows logo) in the front, instead of just the central back button in the first-generation of handsets in the Nokia X series.

Microsoft earlier this week was rumoured to be working to include a home button in the next series of Nokia X Android phones, a feature that was much-requested by users.

The Nokia X offers dual-SIM (GSM+GSM) support with dual standby. The first Android phone from Nokia features a 4-inch IPS LCD display with a 480x800 pixel resolution, translating to a pixel density of 233ppi. The smartphone is powered by a 1GHz dual-core Qualcomm Snapdragon S4 processor, alongside 512MB of RAM.

It sports a 3-megapixel rear camera. The Nokia X Dual SIM handset comes with 4GB of inbuilt storage, which can be expanded up to 32GB via microSD card. It supports Bluetooth, Wi-Fi, GPS with A-GPS, EDGE, GPRS and 3G connectivity options. It is backed by a 1500mAh battery, which is rated to deliver up to 13 hours of talk time and up to 672 hours of standby time on 2G network.
Comments

Google to Display Ads on Dashboards, Refrigerators, Watches and More
Experience Tennis as Roger Federer Sees It, Thanks to Google Glass