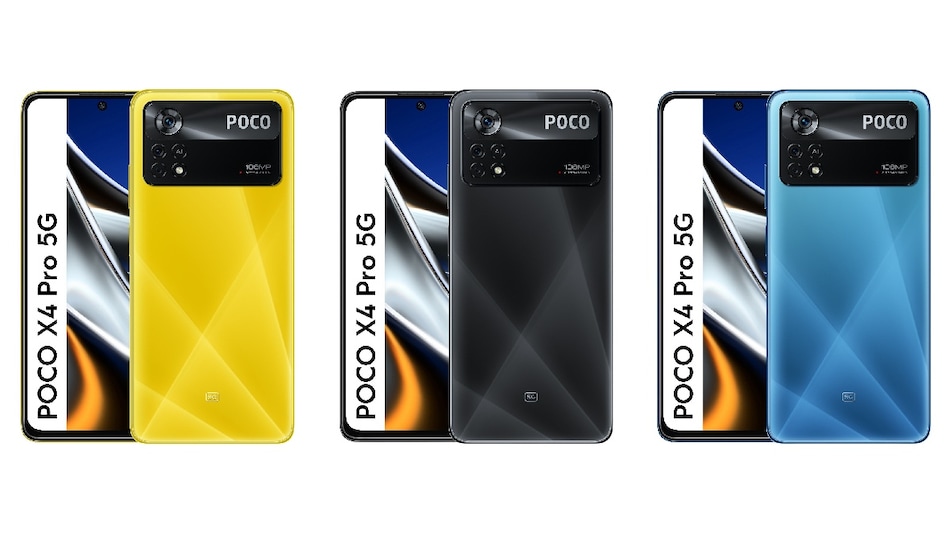 Poco X4 Pro 5G is set to launch on February 28, the company has announced. The phone's launch has been scheduled just in time for the Mobile World Congress 2022 that begins on the same day. Poco has confirmed that the smartphone will launch with a 108-megapixel primary camera. However, it's other specifications have been tipped by a new leak. The phone is said to get a Qualcomm Snapdragon 695 SoC under the hood, along with a 5,000mAh battery and 67W fast charging. Separately, renders shared by a tipster suggests Poco X4 Pro 5G will arrive in three colourways.

The news of the arrival of Poco X4 Pro 5G was shared by the company via a poster on Twitter. The phone will launch globally via a virtual event on February 28 at 8pm GMT+8 (5:30pm IST).

Ahead of the upcoming launch, Poco X4 Pro 5G handset has been spotted by Pocket Lint on the Amazon France website carrying a price tag of EUR 350 (roughly Rs. 29,700). The listing of the smartphone, however, appears to have been taken down.

Poco X4 Pro 5G was spotted on Amazon France with most of the details before the listing was taken down. According to the listing, the Poco X4 Pro 5G will feature a Snapdragon 695 SoC under the hood, paired with 8GB of RAM and 256GB of storage.

Amazon had reportedly listed the Poco X4 Pro 5G with a 6.67-inch AMOLED display with a 120Hz refresh rate and a 360Hz touch sampling rate. The smartphone is tipped to launch with a triple camera setup featuring a 108-megapixel primary camera, an 8-megapixel ultra-wide-angle camera, and a 2-megapixel macro camera. Poco X4 Pro 5G will run on a 5,000mAh battery with support for 67W charging, according to the report.