Realme 7 Pro users will get October 2020 Android security patch with the update. 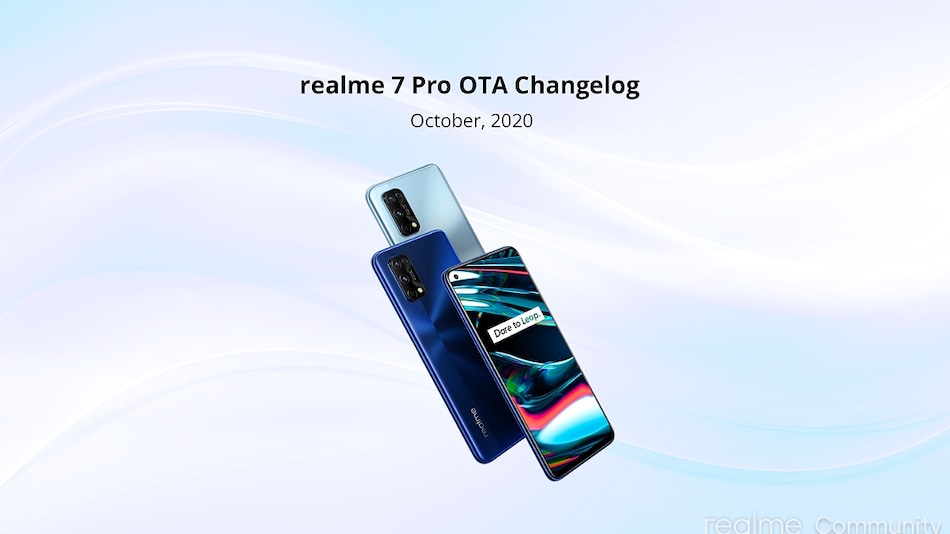 Among other things, the update for Realme 7 Pro will optimise overexposure of the front camera

Realme 7 Pro has started receiving the October 2020 over-the-air (OTA) update. It brings October 2020 Android security patch to the phone along with optimisations to the camera and fixes issues related to charging and fingerprint unlocking. The update will have a staged rollout, which means that only a limited number of Realme 7 Pro users will receive it initially. After Realme is assured that there are no critical bugs in the update, it will have a broader rollout.

Realme announced the update for Realme 7 Pro on its official forum. Firmware version for the update is RMX2170PU_11_A.17. Users can check for the update in their phone settings if they haven't received a notification yet. It should be noted that the full rollout will take a few days.

The update will also optimise the minimum brightness while playing videos. It fixes the issue of the screen dimming after fingerprint unlock in outdoor scenarios. The issue of Realme 7 Pro being unable to fast charge in some scenarios has been fixed as well.

Realme 7 Pro was launched last month, but the smartphone also received a Sun Kissed Leather Edition variant early October. The new model features a vegan micrograin leather finish on the back with orange and white tinges.

Other than the Sun Kissed Leather Edition variant, Realme 7 Pro is also available in Mirror Blue and Mirror White colour options. Realme 7 Pro comes with a quad rear camera setup that is highlighted by a 64-megapixel primary snapper, a 4,500mAh battery, and an octa-core Qualcomm Snapdragon 720G SoC.