Realme C15 and the Realme C12, both are powered by the MediaTek Helio G35 octa-core processor. 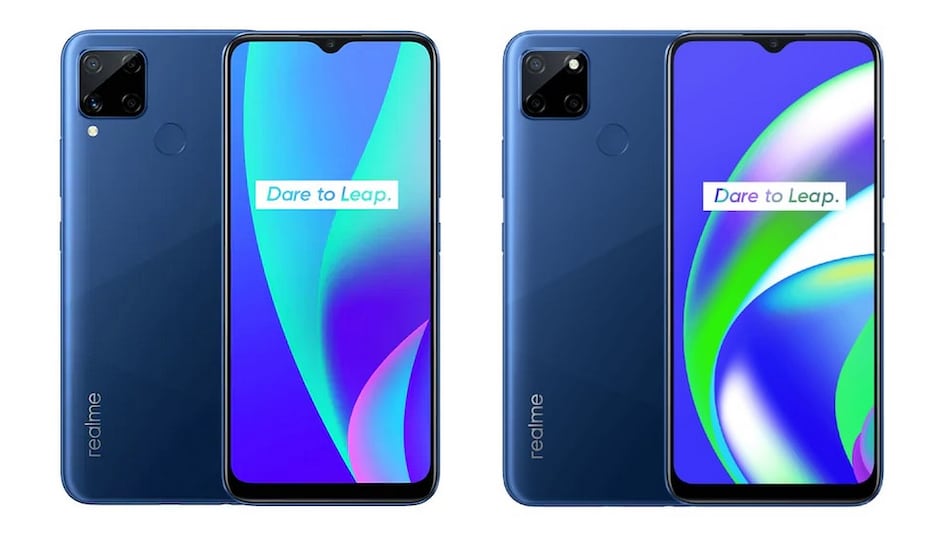 Realme C15 has four cameras, while Realme C12 has three cameras on the back

The Realme C15 and the Realme C12 will be launched in India today, August 18, at 12:30pm. The company is hosting a digital event that will be livestreamed on the Realme India website, as well as on its official YouTube channel.

On the other hand, the Realme C12 launched for IDR 1,899,000 (roughly Rs. 9,600) for the single 3GB + 32GB model and comes in two colour options namely, Marine Blue and Coral Red. We can expect the Realme C15 and Realme C12 price in India to close to the Indonesia prices.

From the Indonesian launch of the phone, we already know the specifications. The dual-SIM (Nano) Realme C15 runs on Android 10 with Realme UI on top. It features 6.5-inch Mini-drop (720x1,600 pixels) display with 88.7 screen to body ratio and Corning Gorilla Glass protection. The phone is powered by the octa-core MediaTek Helio G35 SoC, the GE8320 GPU, and up to 4GB of LPDDR4X RAM.

For storage, the Realme C15 comes with up to 128GB on board that is expandable via microSD card. Connectivity options include Wi-Fi 802.11 b/g/n, Bluetooth v5.0, 4G, GPS, Glonass, a 3.5mm headset jack, and a Micro-USB port for charging. The Realme C15 is backed by a 6,000mAh with support for 18W fast charging. The sensors on board include an ambient light sensor, a proximity sensor, a fingerprint scanner on the back, and a magnetic induction sensor. In terms of dimensions, the Realme C15 measures 164.5x75.9x9.8mm and weighs 209 grams.

Just like the Realme C15, the dual-SIM (Nano) Realme C12 runs on Android 10-based Realme UI. The phone features a 6.5-inch HD+ (720x1,600 pixels) LCD display with 88.7 percent screen-to-body ratio and Corning Gorilla Glass protection. It is powered by the octa-core MediaTek Helio G35 processor and 3GB of RAM.

The phone comes with 32GB on board storage that is expandable via a dedicated microSD card. The Realme C12 packs a 6,000mAh battery with 10W charging. Connectivity options include Bluetooth v5, Wi-Fi 802.11 b/g/n, GPS, Micro USB port, and 3.5mm audio jack. There is a rear fingerprint sensor as well. The phone measure 164.5x75.9x9.8mm and weighs 209 grams.

Poco M2 Pro To Go On Sale in India Today at 12 Noon Via Flipkart: Price, Specifications