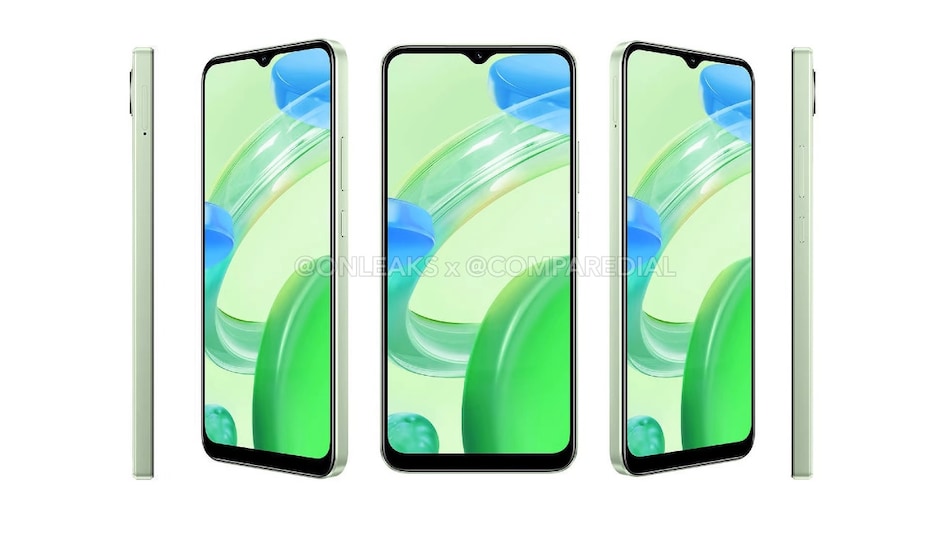 Realme C30 has been part of the rumour mill for some time. There have been several leaks regarding the smartphone's supposed specifications. Now, a new report has surfaced that includes alleged design renders of this device. These alleged renders showcase the complete design of the Realme C30, including the front and back panels. Past leaks have suggested that this smartphone could sport a 6.6-inch full-HD+ display. It is expected to be powered by a Unisoc chipset and feature a 5,000mAh battery with 10W fast charging support.

The supposed renders of the Realme C30 were revealed by CompareDial in collaboration with tipster Steve Hemmerstoffer (@OnLeaks). The Realme handset is said to sport a waterdrop-style notch and a significantly thick chin in the front. It is expected to sport a texture rear panel with a vertical grid design. On the back, it is said to sport a camera module with an LED flash in the top-left corner. There is supposed to be a volume rocker and power button on the right side. The bottom side of the handset is said to feature a speaker grille, a microphone, a Micro-USB port, and a 3.5mm audio jack. The leaked renders also suggest that the Realme C30 could arrive in blue and green colours.

According to a recent report, the Realme C30 could feature a 6.6-inch full-HD+ display. Under the hood, it could pack a Unisoc chipset. There is expected to be a 13-megapixel primary camera and a 5-megapixel selfie snapper. The handset is likely to pack a 5,000mAh battery with support for 10W fast charging. It is expected to be 8.48mm thin and weigh 181g. It could support 2.4GHz Wi-Fi and Bluetooth wireless connectivity. This smartphone has been tipped to run on the Android Go Edition operating system.