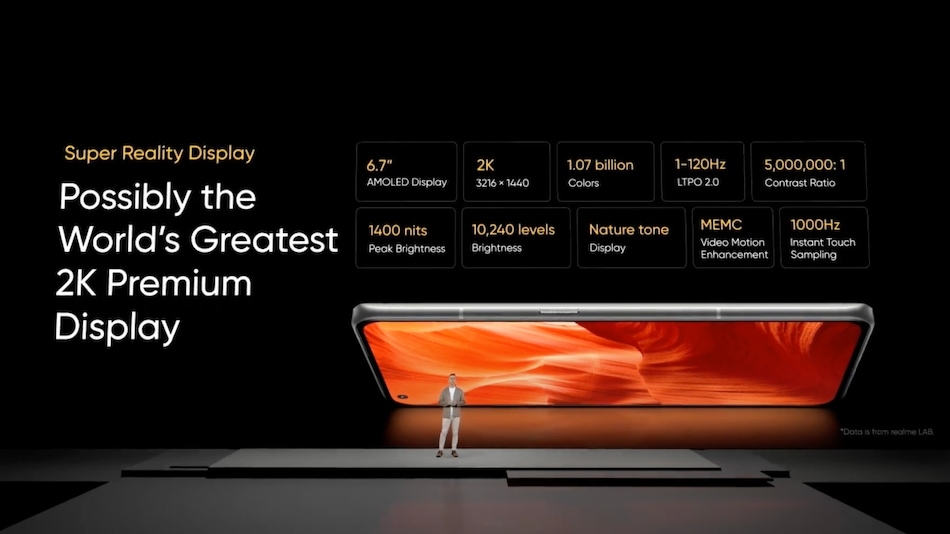 Realme GT 2 and Realme GT 2 Pro were launched at MWC 2022 on Monday (February 28). Both Realme phones were unveiled in China last month. In the series, the Realme GT 2 Pro features a bio-based design that carries a paper-like texture and is claimed to reduce carbon emissions in the manufacturing process. The phone also comes with a Snapdragon 8 Gen 1 SoC and is equipped with an LTPO 2.0-backed ‘Super Reality' display. The Realme GT 2, on the other hand, carries a Snapdragon 888 chip and features a regular 120Hz AMOLED display. Both phones also include triple rear cameras as well as 120Hz displays. Realme is projected to ship over 10 million Realme GT-series phones worldwide in 2022.

The Realme GT 2 series will debut in Europe and will make way to markets including India, Middle East, Southeast Asia, and Latin America in the upcoming months, the company said.

The Realme GT 2 smartphone runs on Android 12 with Realme UI 3.0 skin on top and features a 6.62-inch full-HD+ E4 AMOLED display with a 120Hz refresh rate and 1,300 nits of peak brightness. Under the hood, the phone comes with an octa-core Qualcomm Snapdragon 888 SoC, along with up to 12GB of RAM. The Realme GT 2 carries a triple rear camera setup that houses a 50-megapixel Sony IMX776 primary sensor, along with an 8-megapixel ultra-wide shooter and a 2-megapixel macro shooter. The phone also comes with a 16-megapixel selfie camera sensor in the front.

Realme has offered up to 256GB of onboard storage. The phone comes with connectivity options including 5G, 4G LTE, Wi-Fi 6, Bluetooth v5.2, GPS/ A-GPS, NFC, and a USB Type-C port. There is an in-display fingerprint sensor as well.

The Realme GT 2 Pro runs on Android 12 with Realme UI 3.0 and comes with a 6.7-inch 2K (1,440x3,216 pixels) LTPO 2.0 AMOLED 10-bit ‘Super Reality' display with a 120Hz adaptive refresh rate (ranging between 1–120Hz) and Gorilla Glass Victus screen protection. The display also comes with HDR10+ support and a peak brightness of 1,400 nits. The phone is powered by an octa-core Snapdragon 8 Gen 1 SoC, along with up to 12GB of RAM. There is also a nine-layer Stainless Steel Vapour Cooling Max to offer better heat dissipation over previous Realme GT phones. The Realme GT 2 Pro comes with a triple rear camera setup that carries a 50-megapixel Sony IMX766 primary sensor, along with a 50-megapixel ultra-wide shooter and a 2-megapixel macro shooter.

For selfies and video chats, Realme GT 2 Pro comes with a 32-megapixel selfie camera sensor in the front.

As mentioned, Realme GT 2 Pro comes with a Paper Tech Master design based on a bio-polymer material that lends it a paper-like texture for the back panel.

Realme GT 2 Pro carries a 5,000mAh battery with 65W SuperDart Charge Enhanced fast charging. The proprietary charging technology is claimed to charge the phone from zero to 100 percent in 33 minutes. Besides, the phone measures 163.2x74.7x8.18mm and weighs as low as 189 grams.