Realme MagDart allegedly comes with a fan to manage thermals while charging and ventilation on the back. 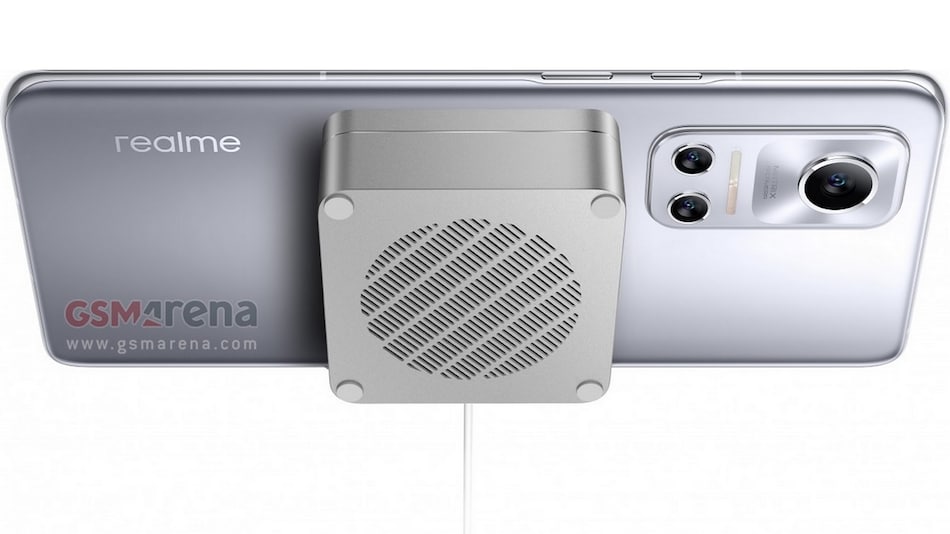 Realme MagDart is said to deliver over 15W charging speed

Realme India took to Twitter to share an image of a smartphone that shows MagDart on it, along with the hashtag “realmeFlash” and the tag line “Coming in a flash.” This suggests the company will unveil a new smartphone called Realme Flash that will debut the new MagDart charging technology. This is supported by a report by GSMArena that shared renders and some details of this Realme Flash smartphone as well as the MagDart charger.

Starting with the phone, it looks like a regular Realme smartphone with a triple rear camera setup and a hole-punch cutout for the selfie camera. Under the hood, the Realme Flash is said to be powered by the Snapdragon 888 SoC, have 12GB RAM, 256GB storage, and run Android 11 with Realme UI 2.0 on top.

The Realme MagDart charging puck is what makes the package more interesting. It is a thick cuboid with ventilation on the back and it magnetically sticks to the back of the phone to charge it, as per the renders. The connection between the charger and the phone is wireless but the MagDart charger does require a USB Type-C connection. It is said to deliver charging speeds of over 15W and the report mentions that it will be the fastest magnetic charger in the world.

The publication also states that the Realme MagDart will come with a fan to keep temperatures in check. It is much thicker than Apple's MagSafe charger and will be capable of much higher wireless charging speeds.

As of now, Realme has not shared a release date for the MagDart charging tech or the Realme Flash smartphone. More information can be expected in the coming days.