Realme Narzo 50i Prime is an entry-level handset starting at Rs. 7,999. 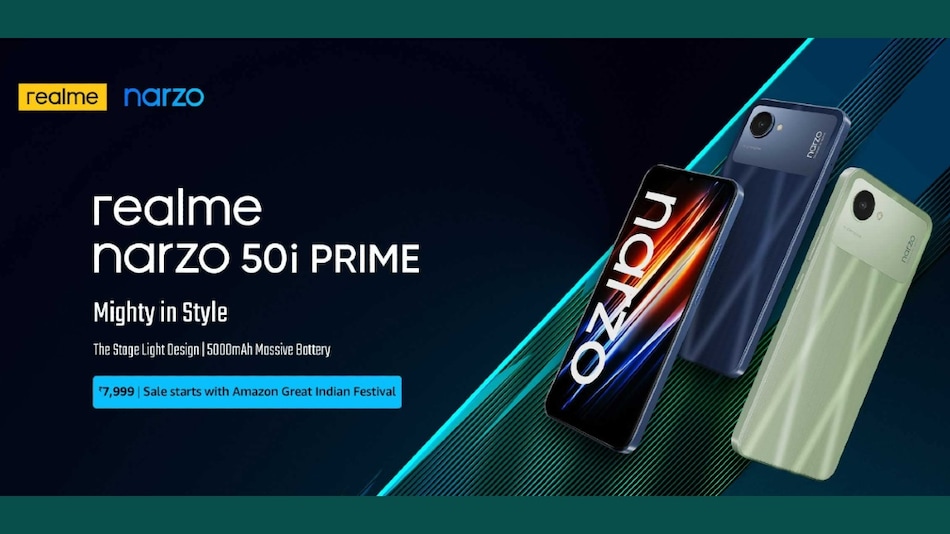 Realme Narzo 50i Prime has been launched in India on Tuesday. The company has revealed that this smartphone packs a 5,000mAh battery that is claimed to provide up to 4 days of audio playback time. It sports a 6.5-inch display with a screen-to-body ratio of 88.7 percent. This is a dual-SIM smartphone that includes a dedicated microSD card slot (up to 1TB). The Realme Narzo 50i Prime comes in Dark Blue and Mint Green colours. It packs an octa-core chipset and runs on Android 11 (Go edition).

It will go on sale in India for the first time at 12am on September 23 with the start of the Amazon Great Indian Festival 2022 sale. However, Amazon Prime members will be able to get their hands on the Realme Narzo 50i Prime at 12pm on September 22.

Realme has revealed that the Narzo 50i Prime has a 6.5-inch display with a screen-to-body ratio of 88.7 percent and 400 nits of brightness. It is powered by an octa-core Unisoc T612 SoC and runs on Android 11-based Realme UI Go Edition.

For optics, the Realme Narzo 50i Prime is equipped with an 8-megapixel AI main camera and a 5-megapixel selfie snapper. It packs a 5,000mAh battery that is claimed to provide up to 4 days of audio playback support.

Furthermore, this dual-SIM smartphone includes a dedicated microSD card slot (up to 1TB). This smartphone features up to 4GB of RAM and up to 64GB of onboard storage. The Realme Narzo sports a stage light design and rigged textures on the back. The handset measures 8.5mm thin and weighs about 182g.