The alleged patent suggests the foldable phone can be wrapped around a wrist. 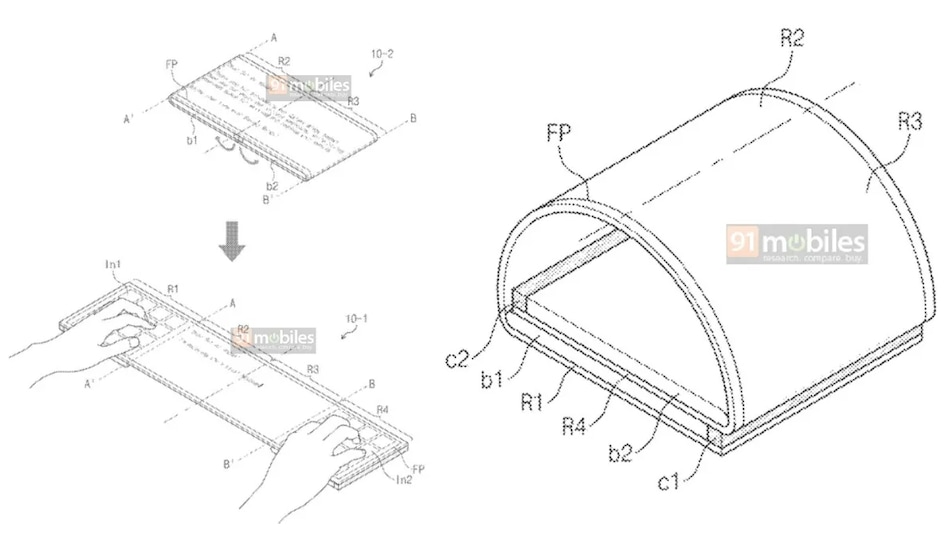 The patent suggests the screen can be bent 180 degrees

Samsung has reportedly filed a patent for a foldable phone whose screen can be expanded and/ or wrapped around a hand. As per a report, this could be possible via a controller, a folding sensor unit, and a foldable display that Samsung wants to include in this phone. The development comes months after the South Korean company was reported to be developing an expandable display that utilises a rolling mechanism. The design is tipped to reduce the need for a secondary display.

91Mobiles reports that a patent for the new folding technology suggests that it uses a flexible screen that can be extended or wrapped around a wrist. The publication also shared the alleged images from the patent, which suggest that the foldable display can be folded at a right angle, forming a curved waterfall-like screen.

There is another diagram, which suggests that the screen can be bent 180 degrees to create a semi-circular display area forming a loop so that it can be worn on your wrist. This essentially means that it could be possible that a future Samsung foldable phone can be worn around your wrist.

It is to be noted that since only the patent has surfaced, we cannot be sure whether this design would actually be put into production.

As mentioned, the news comes a few months after a patent filed by Samsung showed that the South Korean company is developing an expandable display that utilises a rolling mechanism. This design may have been developed to reduce the need for a secondary display. The patent supposedly suggests that this display could be expanded in all directions.