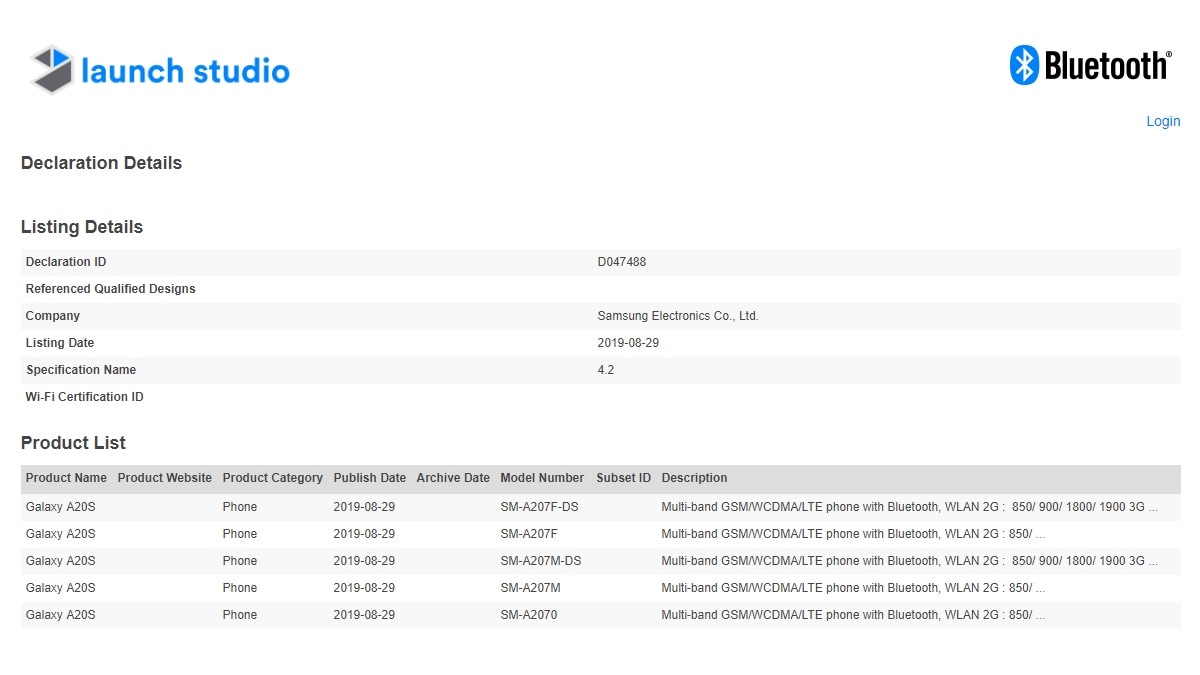 Samsung is busy working on refreshed versions of its Galaxy M and Galaxy A series phones. One of them is the Galaxy A20s, which has now received the Bluetooth SIG certification, indicating that an official launch is not too far. As the name clearly suggests, the Galaxy A20s appears to be an upgraded version of the Galaxy A20 that was launched back in April. So far, we are yet to come across any credible leaks regarding the Galaxy A20s' design or its key internal specifications. But if the naming convention is anything to go by, it will be an affordable phone just like its predecessor with modest specifications.

The Galaxy A20s' Bluetooth SIG listing, which was first spotted by Nashville Chatter, lists the phone's model number as SM-A207. Additional variants of the Galaxy A20s carrying the model numbers SM-A207F and SM-A207M were also spotted, indicating that the phone might be launched in multiple markets.

Notably, another variant with the model number SM-A207F-DS was also listed on the Bluetooth SIG database. The DS in Samsung's convention stands for Dual SIM, which means the phone will offer dual SIM functionality. The phone will support Multi-band GSM, WCDMA and LTE connectivity. As for wireless connectivity, support for Bluetooth 4.2 was listed for the Galaxy A20s and not the faster v5.0 standard, since it is a low-end phone.

Notably, the Samsung Galaxy A20s also received the Wi-Fi Alliance certification earlier this month carrying the model number SM-A207F/DS. The phone was listed as running Android P on the Wi-Fi Alliance database, while its Wi-Fi connectivity gamut includes support for Wi-Fi b/g/n and Wi-Fi Direct. As of now, Samsung is yet to officially tease or confirm the existence of the Galaxy A20s, but the Wi-Fi and Bluetooth certifications are an indication that the phone is in the pipeline.