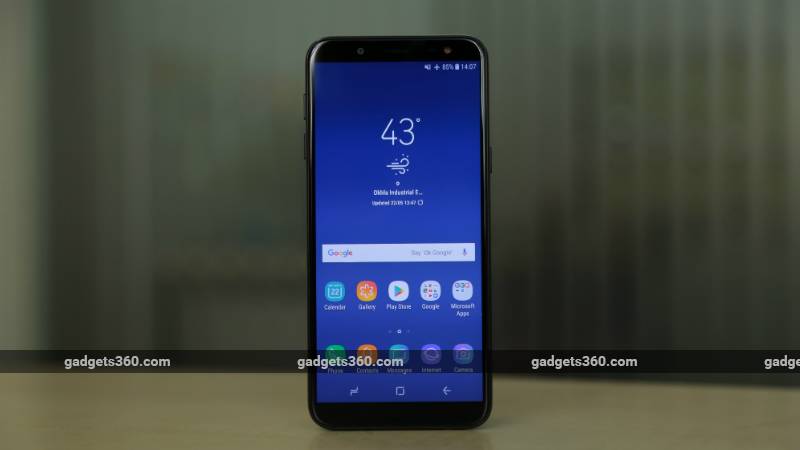 Samsung Galaxy J6, the company's mid-range smartphone, has received a Rs. 500 price cut in India - for its top 4GB RAM, 64GB storage variant. The Galaxy J6 made its way into the country alongside the Galaxy J8 in May this year. The smartphone is available in two variants in India, but only one of the models has received the price cut. During its launch, the Galaxy J6 with 4GB RAM and 64GB inbuilt storage was priced at Rs. 16,490, but is now retailing for Rs. 15,990. The Galaxy J6 variant is available with the new price only via Samsung India E-Store.

The new Samsung Galaxy J6 price cut in India was first tipped by established Mumbai-based retailer Mahesh Telecom, in a tweet on Monday. Notably, the smartphone is still available via Paytm Mall and Flipkart but with the old price. Notably, ICICI Bank credit and debit card users can get a Rs. 1,500 cashback on the Galaxy J6, which brings down the cost to Rs. 13,490. We've reached out to the company for confirmation of the price cut, and will update this space when we hear back. The price of the 3GB RAM/ 32GB storage variant remains unchanged, at Rs. 13,990.

The Galaxy J6 comes with Android 8.0 Oreo out of the box, sports a plastic unibody design, and an 18.5:9 Super AMOLED display that flows from edge-to-edge. The smartphone does not have a dual rear camera setup. It supports Face Unlock and has artificial intelligence features like object and scene detection. As mentioned, the new price of Galaxy J6 in India is Rs. 15,990, and but the price cut is applicable in only one configuration - 4GB RAM and 64GB internal storage. It comes in three colour options - Black, Blue, and Gold. It is sold via both online and offline channels, and the new price may soon reflect everywhere soon.

To recall some of the specifications, the dual-SIM (Nano) Galaxy J6 runs Samsung Experience on top of Android 8.0 Oreo. The smartphone comes with a 5.6-inch HD+ Super AMOLED 'Infinity display' with an 18.5:9 aspect ratio. It is powered by the Exynos 7870 processor, paired with 3GB or 4GB of RAM. These come with 32GB or 64GB of internal storage respectively, and support storage expansion via microSD card (up to 256GB).

On the imaging front, the Galaxy J6 has a 13-megapixel rear camera with an aperture of f/1.9 and an 8-megapixel selfie shooter with an aperture of f/1.9. Both front and rear cameras are accompanied by a single LED flash. Connectivity options include 4G VoLTE, Wi-Fi, Bluetooth, GPS/ A-GPS, and a 3.5mm headphone jack. The smartphone has a non-removable 3,000mAh battery and a Micro-USB port for charging and data transfers.