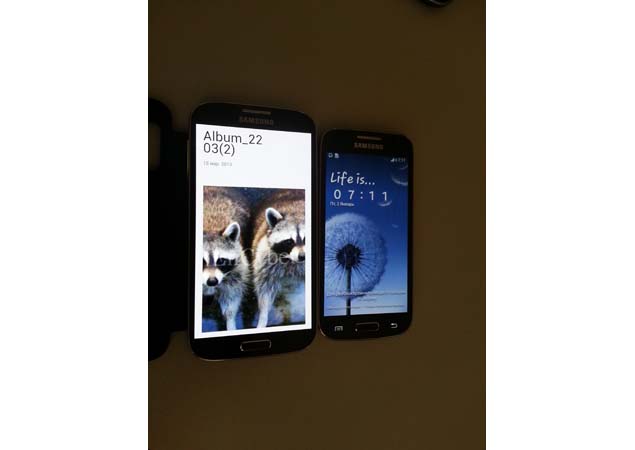 After launching the Galaxy S4, Samsung looks all set to launch the Galaxy S4 mini. As per a news report by SamMobile, Samsung Galaxy S4 mini will sport a 4.3-inch qHD Super AMOLED display with 256ppi. The smartphone will allegedly come with 1.6GHz dual-core processor. It is expected to run on Android 4.2.2 (Jelly Bean) along with TouchWiz Nature UX 2.0.

Samsung Galaxy S4 on the other hand features a 5-inch full-HD screen with a resolution of 1080x1920 pixels, and pixel density of 441ppi. It is powered by 1.6GHz Exynos octa-core processor in some regions, and a 1.9GHz Qualcomm Snapdragon quad-core processor in others. It has 2GB of RAM and a PowerVR SGX544MP3 triple-core GPU.

For camera, Samsung Galaxy S4 packs in 13-megapixels rear shooter and a 2-megapixel one on the front. The Galaxy S4 also offers more camera features including dual-shot, employing the use of both front and back camera, an eraser shot mode to remove people from photos, and a Cinemagram like feature called Cinema Photo, among several other tricks.

Samsung Galaxy S4 is expected to be hit retail shelves by April 26 and will come in 16GB, 32GB and 64GB variants but will also feature a microSD card slot for expanding the storage.

It is noteworthy, that Samsung had also introduced a mini version of its Galaxy S III in October 2012. Samsung Galaxy SIII mini features a 4-inch screen and runs Android 4.1 Jelly Bean. It is powered by a dual-core 1GHz processor and features a 5-megapixel camera. It has a 1500 mAh battery and 8/16GB internal storage options.

However, Samsung Galaxy SIII mini has not been launched in India so far and there are reports indicating that it is unlikely to make it to the country.