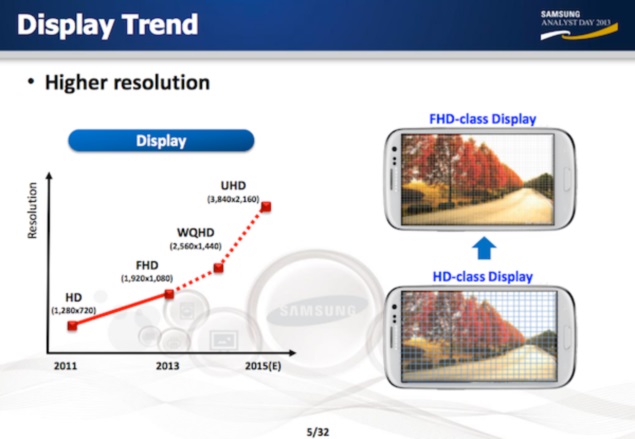 We may see smartphones with displays bearing pixel densities of 560 ppi and 4K resolutions by 2014-2015, if Samsung is to be believed.

The South Korean giant's Analyst Day event in Korea has revealed the company's plans for next few years which includes devices with AMOLED panels sporting 560ppi (pixel per inch) pixel density. Samsung expects to launch phones with WQHD resolution (2560x1440) next year, though no specific rollout timings have been revealed. Further, the company intends to launch smartphones with 4K displays sometime in 2015, notes Stefan Constantinescu of Android Beat. The report also quoted Samsung claiming one out of every three patents for flexible displays.

In addition, the South Korean giant also revealed that it has been working on custom ARM CPU much like Qualcomm and Apple. This means that Samsung will be soon launching its custom CPU architecture licensed from ARM and which will be compatible with ARM instructions for its upcoming devices.

Samsung has already promised its investors new technology to take on Apple, and that it would renew its focus on tablets. A recent report indicated that Samsung's tablet sales would exceed 40 million units in 2013, which is more than double the sales of Samsung tablets in 2012.

Additionally, Samsung's top executive has also announced new plans for devices - including devices with folding displays, such as foldable phones - due in 2015. Samsung has been reportedly putting a lot of effort into new form factors which include phablets; wearable devices (Galaxy Gear); flexible phones; curved display smartphones (Samsung Galaxy Round) and even foldable phones. Unfortunately, Samsung's top executive did not reveal a timeframe for the devices with folding displays but clearly hinted that the company is indeed working on such devices.