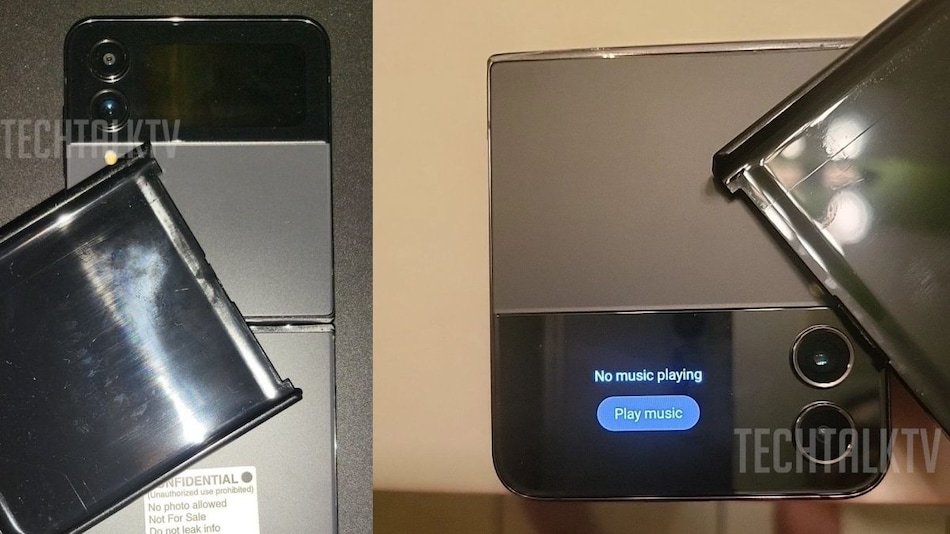 Samsung Galaxy Z Flip 4 live images have been leaked online and it looks like it will come in a design similar to its predecessor. Although, it can be seen with a similar metal frame, hinge, and camera cutouts, the cover display of the foldable smartphone seems to be larger than before. Samsung is yet to announce the smartphone but it an earlier report claimed the smartphone would be available for pre-orders starting August 10 and will be available for purchase on August 26 in Blue, Bora Purple, Graphite, and Pink Gold colour options.

Tipster TechTalkTV (@Mr_TechTalkTV) has shared the live images of the upcoming Galaxy Z Flip 4 from Samsung. The tweet that had the images was later removed due to a copyright issue but not before websites like SamMobile covered it.

The live images of the foldable smartphone show that the handset will most likely sport design features similar to Galaxy Z Flip 3, except for the cover display that seems to be larger this time. The smartphone can be seen in matte grey colour with a similar metal frame, hinge, and camera cutouts.

According to a recent report, the Samsung smartphone is expected to go on sale on August 26 this year with pre-bookings starting on August 10. It is said to be offered in four colour options, Blue, Bora Purple, Graphite, and Pink Gold. Samsung is yet to announce the launch date and the specifications of the smartphone.

The upcoming foldable Samsung smartphone can reportedly offer up to 512GB of inbuilt storage that is an upgrade over the 256GB storage options on the current generation. It is also said to miss the microSD slot like the Galaxy Z Flip 3. Samsung is expected to offer the 512GB storage variant of the Galaxy Z Flip 4 with a price tag of $1,100 (roughly Rs. 86,000).

Samsung has also started the firmware development of the Galaxy Z Flip 4, as per a report. It was said that the smartphone can get the firmware version F721NKSU0AVF2. The smartphone is also reportedly going to support swipe for split-screen feature.

According to another report, Galaxy Z Flip 4 will feature the octa-core Snapdragon 8+ Gen 1 SoC along with 8GB RAM. It is expected to come with a 12-megapixel ultra-wide angle camera and a 12-megapixel primary sensor. At the front, the smartphone can get a 10-megapixel selfie camera.