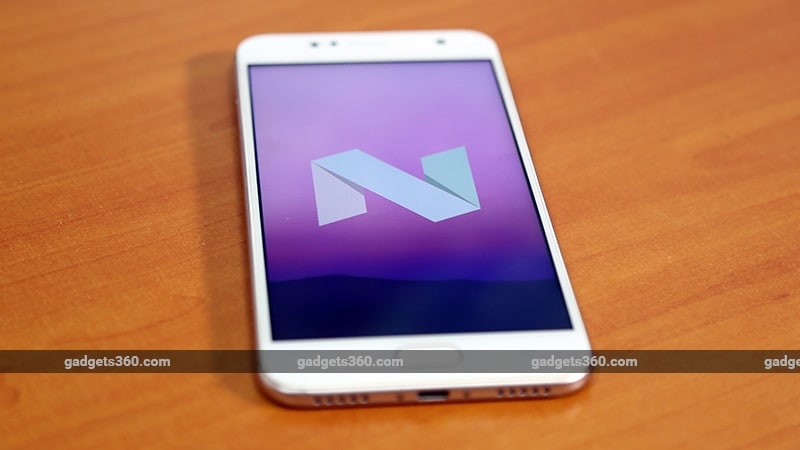 While the body of the smartphone is made of plastic it does look and feel premium. The 5.5-inch IPS display has 2.5D curved glass. Asus hasn’t specified any sort of protection for the display so you might want to be careful while handling this phone. Below the screen is a fingerprint sensor with capacitive touch buttons on either side. The front camera has its own flash, and the usual sensors are positioned right next to it.

At the back, the primary camera is positioned at the centre, with a single LED flash next to it. The phone has curved sides and rounded edges which makes it comfortable to hold. The power and volume buttons are placed on the right. We found the volume buttons to be placed a little too high, which forced us to shuffle the phone in our hand to reach them.

There's a Micro-USB port and speaker grilles at the bottom, while the headphone jack and secondary microphone are placed on the top of the phone. It weighs 144g and measures 7.8mm in thickness which is manageable. The finish on the body makes the phone easy enough to grip, and we never dropped it accidentally.

Smartphones in the sub Rs. 10,000 segment come packed with good hardware these days, and the ZenFone 4 Selfie is no exception. Asus has equipped this phone with a Qualcomm Snapdragon 430 processor, which is efficient and is found in the likes of the Nokia 6 (Review) and Moto G5S (Review). The processor has four CPU cores clocked at 1.1GHz and another four clocked at 1.4GHz. The Zenfone 4 Selfie also has 3GB of RAM and 32GB of storage which can be expanded by up to 2TB using the dedicated microSD card slot.

The ZenFone 4 Selfie is a dual-SIM device and has two Nano-SIM slots. It has support for 4G and VoLTE on both SIMS but only one can latch onto a 4G network at a time. Asus has packed in a 3000mAh battery which is the average capacity we expect from most smartphones today. You get a 7W charger in the box, which takes over two and a half hours to charge the battery fully.

The screen measures 5.5 inches and has a resolution of 720x1280 pixels. It has good colour reproduction and viewing angles, and we even found it to be usable under sunlight. However, if you like saturated displays, you might be left wanting as there is no way to tweak the output. The fingerprint scanner is fairly accurate and apart from a few misses, we were able to unlock the smartphone easily. The phone is quick to register a fingerprint but takes a little longer than we would like to unlock itself.

Asus ships the ZenFone 4 Selfie running Android Nougat with Zen UI 4.0 on top. We found Zen UI to be easy to use as it has minimal changes compared to stock Android. Asus has chosen a bright theme which makes it look different, but you do have the option to change themes as per your liking. The company has also integrated shortcuts that let you launch apps and interact with the phone using only touch and motion gestures. These are disabled by default and you will need to enable them through the Settings app if you choose to use them.

You can also enable a one-handed mode by double-tapping the Home button, which shrinks the contents of the screen such that it is easier to reach everything with one thumb. The phone lets you run two instances of several apps, and has a mode called Game Genie which clears RAM before launching a game. Asus has also integrated Go2Pay into the Settings, which is a payments app that can be used to pay for bills and recharges.

There are a few preinstalled social media apps such as Facebook, Messenger and Instagram. Asus also has its own Mobile Manager app which gives you details of resource usage for the RAM, battery and storage. Selfie Master is a simple shortcut that launches the camera in beautify mode directly. The same app also includes BeautyLive which lets users stream to Facebook and YouTube with beautification on. Our review unit also had a few preinstalled Japanese apps, and hopefully, retail units will not have these.

While the ZenFone 4 Selfie is an entry-level phone, it does pack in powerful hardware. The Snapdragon 430 is good enough to handle day-to-day tasks without any lag or stutter. With 3GB of RAM, we rarely saw apps getting closed. The phone could multitask even with games running in the background. The ZenFone 4 Selfie managed to run most of our usual games without any issues.

We also ran this phone through a few benchmarks to see how it fares against the competition. In AnTuTu, it managed to score 44,276, and the single-core and multi-core tests in Geekbench 4 gave us 668 and 2,563 respectively. We got 10,020 in 3DMark Ice Storm Standard. Battery life is decent and the phone could deliver one day of light to medium use. In our HD video loop test, the phone managed to clock 10 hours, 3 minutes.

The Asus ZenFone 4 Selfie sports a 13-megapixel camera with phase detection autofocus at the back, and a 13-megapixel selfie camera with an f/2.0 aperture at the front. The camera app has shortcuts for HDR, Portrait mode, the timer, and the flash. There are multiple modes including panorama, time-lapse, beauty, pro, and super resolution. Pro mode gives you complete control of the camera which includes the ISO, shutter speed, exposure, white balance, and focus.

The phone takes some time to focus and we found it to have a bit of shutter lag. Photos taken with the ZenFone 4 Selfie were just average. We observed that daylight shots lacked detail and some also had a bit of purple fringing. Zoom into a shot and you can see a watercolour-like effect to it. Taking macros is slow as you have to wait for the phone to lock focus. With portrait mode enabled, the smartphone blurs backgrounds digitally in an attempt to make subjects stand out. We found this mode to be inconsistent but it could manage good separation when it worked.

Night shots are barely usable - the phone keeps noise in check but oversharpens photos, resulting in poor output. Selfies are good though and have a good amount of detail. Selfie beautification is somewhat helpful and can improve photos. The selfie flash makes it easy to take shots in low light. Video recording maxes out at 1080p at 30fps, and there is electronic video stabilisation but we did not find it to be very effective.

Verdict
With the Asus ZenFone 4 Selfie, the Selfie series is accessible to a lot of people. Users get a decent front camera and live beautification mode can be useful if you are into vlogging or doing Facebook Live videos. For the price, the ZenFone 4 Selfie has decent hardware, but the performance of the rear camera is below average. If you intend to take a lot of selfies or use the live beautification mode, then the Zenfone 4 Selfie works as a good tool. If you don't mind spending more, the ZenFone 4 Selfie Dual Camera at Rs 14,999 has dual front cameras consisting of one 20-megapixel selfie shooter and another 8-megapixel one with a wide-angle lens. You also get more RAM and storage, though we haven't tested the phone out yet, so we can't speak for its real world performance. If you are on a strict budget and looking for an all-rounder, the Xiaomi Redmi Note 4 (Review) would be our pick.