The display, SoC and main rear camera gets a much-needed upgrade compared to the Galaxy F22 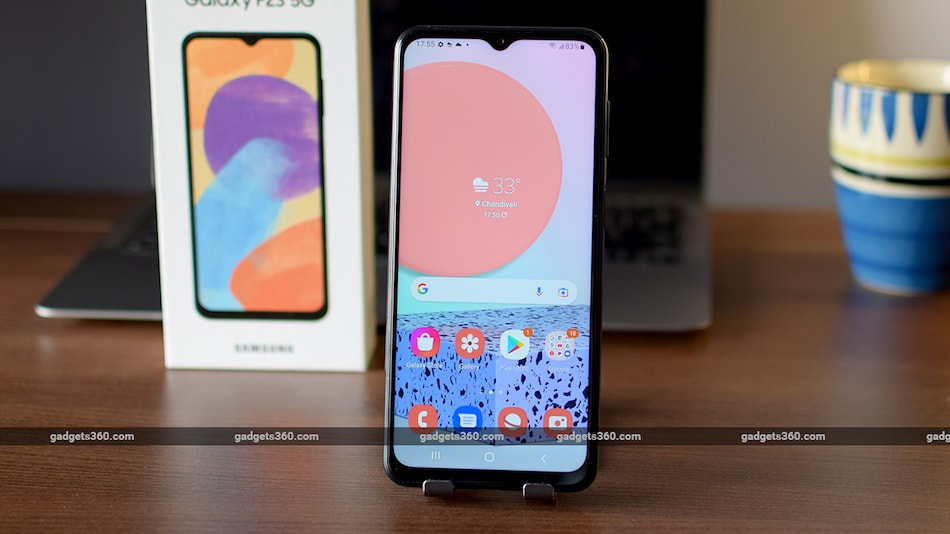 Samsung seems to be attempting to make amends for its poorly executed Galaxy F22 (Review) smartphone from last year with the launch of the Galaxy F23 5G. This new model has a higher starting price, but one glance at the spec sheet and you'll notice some big updates. The Galaxy F23 5G is all set to go on sale in India on March 16 and since we've only just received our unit, we thought we'd give you a peek at what you can expect.

The Samsung Galaxy F23 5G is priced starting at Rs. 17,499 for the variant with 4GB of RAM and 128GB of storage, which is the one I have. For Rs. 1,000 more, you can get 8GB RAM and the same amount of storage. The good news is that the internal storage is expandable thanks to the dedicated microSD slot.

Samsung sent me a unit in the Forest Green colour, and the Galaxy F23 5G is also available in Aqua Blue. The plastic back panel has a matte finish, which does an okay job of masking fingerprints. The deep green shade is only visible at certain angles under light and it looks almost black at other angles. I have to say, it looks quite nice and almost makes up for the dated design of the front.

The Galaxy F23 5G is a chunky phone, since it packs a 5,000mAh battery. It does support fast charging (up to 25W), but a charger isn't included in the box. Just like Samsung's flagships, the packaging of its budget phones has now started becoming lighter. The box only has the a USB Type-C to Type-C cable and a SIM eject tool.

The Samsung Galaxy F23 5G has a minor camera bump on the back and has the usual ports and buttons, including a headphone jack. The fingerprint sensor is integrated into the power button. In my brief time with this phone, I've found the Galaxy F23 5G comfortable to hold thanks to the rounded sides of the frame.

Design-wise, the Galaxy F23 definitely looks like a budget smartphone with its thick display bezels and gaping chin. In fact, it's not too different from its predecessor, but the changes are noticeable once you begin using it. The display now has a full-HD+ resolution and a 120Hz refresh rate, which are both better than what the Galaxy F22 offered, but this has come at the cost of losing the AMOLED panel. The LCD screen on the Galaxy F23 5G is alright, but lacks the vibrancy of Samsung's Super AMOLED displays.

The Samsung Galaxy F23 5G has a good selection of ports and two slots for Nano-SIMs, along with one for a microSD card
Photo Credit: Roydon Cerejo/ Gadgets360

The next big upgrade is the SoC. The Samsung Galaxy F23 5G uses the Qualcomm Snapdragon 750G SoC, which is not particularly new, but is plenty powerful and we've so far seen it in higher-priced phones such as the OnePlus Nord CE 5G (Review) and Xiaomi Mi 10i (Review). I'm expecting gaming performance to be relatively good – this was one of our main complaints with the Galaxy F22.

Samsung has been on the top of its game when it comes to the software of its recent launches, and it's nice to see the same level of attention paid to budget offerings too. The Galaxy F23 5G runs OneUI 4.1 based on Android 12, and Samsung has promised two years of OS upgrades and four years of security updates, which is really good.

The pricing of the Samsung Galaxy F23 5G puts it in close quarters with the Redmi Note 11 Pro and the Realme 9 5G Speed Edition. The Galaxy F23 5G is at a slight disadvantage since the others offer better bundled accessories, including fast chargers. Can the Galaxy F23 5G deliver a good enough user experience to make it worth considering? We will be testing the performance, cameras and battery life of the Galaxy F23 5G over the next couple of days, so don't miss our full review coming soon.