Samsung’s Galaxy F22 features a big battery and a high-refresh-rate Super AMOLED display, but the competition offers much more. 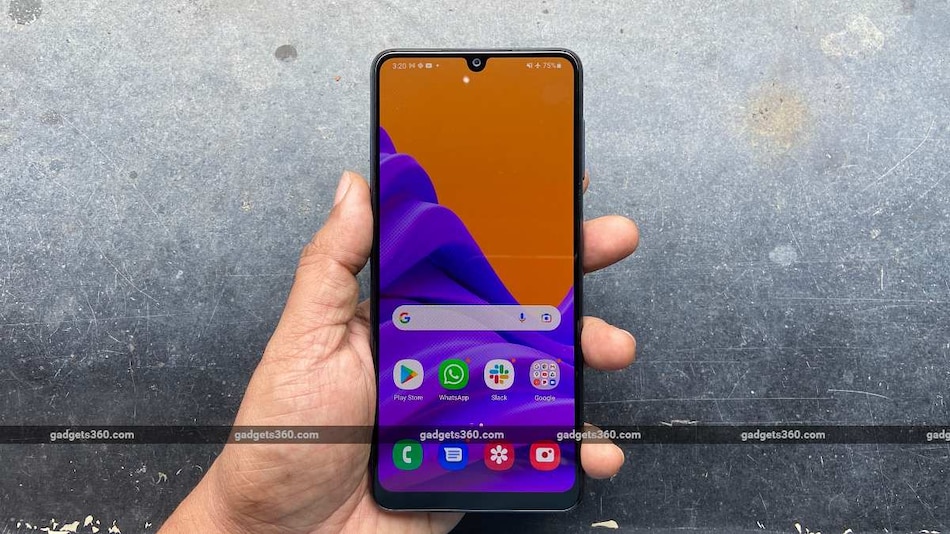 Samsung's latest F-series smartphone looks quite practical, goes big on battery life, and appears to offer decent hardware at a budget price point. However, after using it for more than a week, I discovered that it's not what the Samsung Galaxy F22 offers, but what it doesn't, that makes it just an average budget smartphone overall.

Samsung's Galaxy F22 is available in two variants. There's a base 4GB RAM and 64GB storage variant, which we received for this review, and is priced at Rs 12,499 in India. Then there's the second variant with 6GB of RAM and 128GB of storage, which is priced at Rs 14,499.

The Galaxy F22 has a no-frills design, which is practical at best. It's available in two finishes – Denim Black and Denim Blue. The smartphone has a plastic body with the display panel made of Gorilla Glass 5. The plastic unibody has a matte finish with fine grooves on the back, which provides good grip. Both the display glass and back panel are good at resisting fingerprints. The fit and finish feels solid, with no creaks. Despite its 9.4mm thickness and 203g weight, the Galaxy F22's relatively tall body made it easy to hold. It's even comfortable enough for one-handed use, which is quite an accomplishment for a smartphone with a 6,000mAh battery.

The Samsung Galaxy F22 has a 6.4-inch display with a waterdrop-style notch at the top and a noticeable chin at the bottom. The display notch does seem a bit dated, as most smartphones at this price point now have displays with hole-punch cutouts. The placement of the ambient light sensor in that notch led to the display dimming randomly while playing games in landscape because I ended up blocking it with my thumb. Thankfully, the Game Booster app has a handy toggle to disable auto brightness adjustment while playing games.

The Galaxy F22 uses the MediaTek Helio G80 processor, which was announced in early 2020. This SoC has two Cortex-A75 cores clocked at up to 2GHz and six Cortex-A55 cores at 1.8GHz. The phone has either 4GB or 6GB of RAM and 64GB or 128GB of storage, along with a microSD card slot for storage expansion up to 1TB. Connectivity options include support for 4G/LTE, Bluetooth 5, and dual-band Wi-Fi ac.

The 6.4-inch display has an HD+ (720x1600) resolution and 90Hz refresh rate. Given that this is a Super AMOLED panel, Samsung has enabled an Always On Display (AOD) feature, which shows icons for notifications when the phone is locked.

The Samsung Galaxy F22 has a single bottom-firing speaker

There's also an FM Radio app, which lets you listen to local stations after plugging in a pair of wired earphones. The phone has a single speaker located at the bottom and a 3.5mm headphone jack at the top. There's a 6,000mAh battery, and this phone supports wired charging at up to 25W.

The Galaxy F22 runs Samsung's One UI 3.1 software, which is based on Android 11. Samsung seems to have worked on optimising its rather bloated One UI to perform well on the 4GB RAM variant of the Galaxy F22. Still, there's a collection of preinstalled Samsung-branded apps that you cannot get rid of, along with several third-party apps from Microsoft and others that can be uninstalled. Despite having all these apps, I was surprised to see very few promotional notifications when using the phone.

Using a 90Hz refresh rate display definitely enhanced the software experience of the Galaxy F22, and it felt fluid when swiping between screens or scrolling through long social feeds. The HD+ resolution is low compared to the full-HD+ panels used by some competitors at this price level, but the panel has punchy colours and deep blacks that are evident when streaming movies and playing games. Despite being sufficiently sharp for everyday use, Netflix only recognised Widevine L3 support, which allowed for SD quality playback. Thus, some content didn't look as sharp as it did on competing smartphones, some of which support Widevine L1 with HD resolution.

The Super AMOLED display has notch at the top, which seems a bit outdated compared to the competition

While the usage experience of the device was satisfactory, the benchmark tests we conducted showed generally lower than average performance for this price level. The Samsung Galaxy F22 scored 1,61,369 in AnTuTu, while the Realme Narzo 30 scored 3,56,846 points. I also noticed performance gaps between the two phones in Geekbench, in which the Galaxy F22 managed 372 and 1,313 in the single and multi-core tests, while the Realme Narzo 30 scored 532 and 1,700 points respectively.

The gaming experience was decent at best, and the smartphone got quite hot while playing demanding games like Call of Duty: Mobile and Asphalt 9: Legends at default settings. Call of Duty: Mobile ran with plenty of skipped frames at the default Medium graphics and frame rate settings. Asphalt 9: Legends also stuttered and dropped frames during gameplay. Indeed, this is a smartphone that's not meant for intense 3D games, but is better suited for casual titles.

The 6,000mAh battery can be charged at up to 25W, but Samsung only includes a 15W charger in the box. Obviously, charging was relatively slow – the Galaxy F22 took 2 hours and 41 minutes to go from a dead battery to fully charged. A big battery also means good battery life, and Samsung's software optimisations seem to have paid off, with the phone lasting 29 hours and 35 minutes in our HD video battery loop test. With regular use, which involved plenty of social media apps, an hour of gaming, two or more hours of video streaming, and taking some photos, the phone easily lasted two days before I needed to reach for a charger. The display's refresh rate was set to 90Hz during testing, and changing that to 60Hz would have added a few more hours.

The Samsung Galaxy F22 features a quad camera setup at the back with a 48-megapixel primary camera, an 8-megapixel ultra-wide-angle camera, a 2-megapixel macro camera, and a 2-megapixel depth sensor that's used when the Portrait mode is active. Selfies are handled by a 13-megapixel camera, which sits inside the display notch. The camera interface is easy to use with easy access to relevant controls along with a customisable camera mode switcher.

Photos taken in daylight using the primary camera came out clean and showcased good detail and dynamic range. Colours were a bit saturated, but did not look too different from the actual scene. Photos captured using the ultra-wide-angle camera weren't as detailed as the ones taken with the primary camera, and looked decent at best, with noticeable purple fringing and some blown-out highlights in brighter areas.

Daytime selfies when using the Portrait mode came out a bit hazy, with brightly lit backgrounds getting overexposed. I noticed the same issues when using the Portrait mode with the rear camera. Edge detection was decent and the camera did not hesitate to snip my hair when it felt like it. Macro photos showed a passable level of detail, but were not sharp enough to be usable.

As expected, low-light camera performance was not great. The primary camera was slow to lock focus and shots exhibited a lot of noise in darker areas as well as murky textures throughout. The Night mode improved such photos by making them brighter, but textures and details only got worse, and some photos ended up looking quite blotchy. The ultra-wide-angle camera was not usable in low light, producing only blurry photos, and the Night mode was not of any help here. Using the front-facing camera in low light resulted in selfies with noticeable noise, average detail, and dull colours. The Night mode managed better colour, but could not fix the noise.

Video recording tops out at 1080p 30fps for the front and rear cameras. Video captured in daylight using the front camera came out a bit shaky and backgrounds were overexposed, but there was a decent level of detail in foreground subjects. 1080p 30fps video captured with the rear camera looked quite good with good stabilisation and detail. The phone can also shoot 1080p video using the ultra-wide-angle camera, and such clips showed decent stabilisation with passable detail, but brighter parts of the scene were overexposed. Low-light footage had noticeable noise, but was usable provided there was ambient light in the vicinity. Switching to the ultra-wide-angle camera at night resulted in videos that looked very dull.

After using the Samsung Galaxy F22 for a week, I found that it is a decent budget smartphone for those with basic needs, but does have quite a few shortcomings.

There's a vibrant 90Hz refresh rate Super AMOLED display that's good for watching videos on, and enhances the usage experience. Then there's the 6,000mAh battery for those seeking no compromise in terms of battery life.

But if you take a long hard look at the competition, you'll start to realise that other companies offer much more, not just in terms of specifications, but even convenience. You also have to consider that the Super AMOLED display does not actually mean you get crisp-looking video quality because you're limited to SD content for OTT apps. Battery life is well optimised, but the mega 6,000mAh battery takes well over two hours to charge with the bundled 15W charger.

Some people might be alright with these compromises, but the Realme Narzo 30 (Review), offers good battery life, a full HD+ display with HD content streaming support, and faster charging with a 30W charger in the box. Then there's Xiaomi's Redmi Note 10 (Review), which for an additional Rs 500 offers 33W charging, a full HD+ Super AMOLED display, and stereo speakers.

Realme Narzo 20 Pro Getting Android 11-Based Realme UI 2.0 Update, Changelog Screenshots Show
iQoo 8 May Be Unveiled on August 4, Tipped to Come With Snapdragon 888 Plus, 2K Display