Nokia G21 Review: Android One, Anyone? 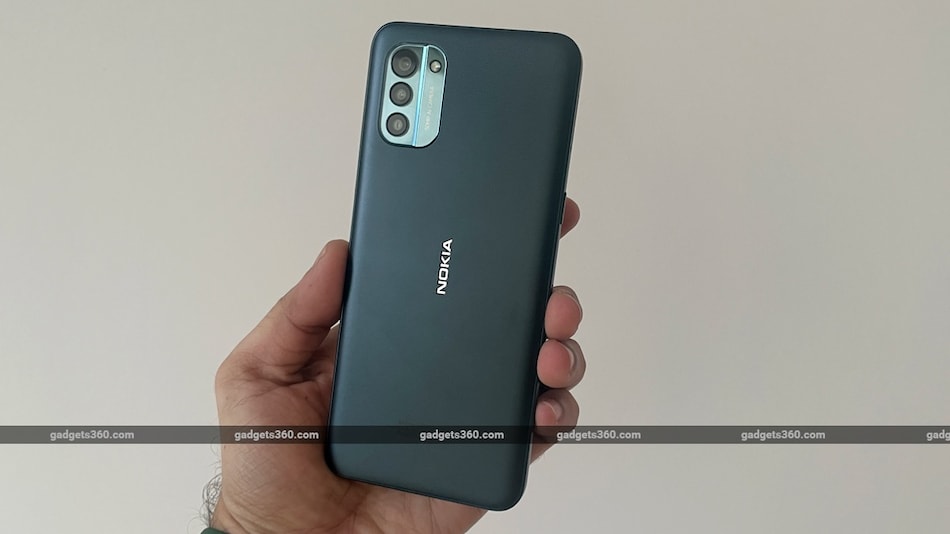 The Nokia G21 is a recent budget smartphone from HMD Global. It promises a three-day battery life and Android OS upgrades for the next two years. The G21 also features a high refresh rate display that is slowly becoming common in the sub Rs. 15,000 price segment. The competition is heating up in this space with brands such as Redmi, Realme, and Samsung constantly trying to outdo each other. The Nokia G21 is banking hard on its Android One roots and big battery capacity to appeal to purists. So, should you consider the Nokia G21 if you're on a tight budget? Here's my review.

While most smartphones in the budget segment tend to sport glossy back panels with gradient patterns, the Nokia G21 feels a bit old-school. It has a textured back panel that is made out of plastic, just like the rest of the phone. This texture helps keep fingerprints away. HMD Global also includes a case in the box. The back of the Nokia G21 houses a rectangular camera module In the top left corner which doesn't protrude much.

The dewdrop notch on the Nokia G21 is fairly common in smartphones at this price range.

In tune with the current design trends, the sides of the Nokia G21 are completely flat. The corners are rounded, so they won't dig into your palm when you hold the smartphone. HMD Global has gone for a side-mounted fingerprint scanner that's integrated in the power button. The volume buttons sit slightly higher up on the same side but are within reach when using the phone single-handedly.

On the other side, the Nokia G21 has a dedicated Google Assistant button and the SIM tray. The 3.5mm audio jack is present on the top, while the USB Type-C port is at the bottom along with the speaker.

The Nokia G21 sports a 6.5-inch display with a 20:9 aspect ratio and an HD+ resolution. It has the dewdrop notch at the top which is still common in phones at this price range. The display also has a thick bottom chin. Overall, the Nokia G21 feels well-built and sturdy.

The Nokia G21 has modest specifications. It is powered by a Unisoc T606 SoC which is an entry-level, octa-core 4G SoC with two ARM Cortex-A75 performance cores, and six ARM Cortex-A55 efficiency cores, all clocked at 1.6GHz. The Nokia G21 has an HD+ display with a 90Hz refresh rate and a maximum brightness of 400 nits. Storage expansion is possible via a dedicated slot for a microSD card.

There is support for Bluetooth 5, dual-band Wi-Fi ac, NFC, and three satellite navigation systems. The phone packs a 5,050mAh battery with support for up to 18W fast charging, however HMD Global bundles a 10W charger in the box.

The Nokia G21 runs Android 11 and is a part of the Android One program which means you get stock Android and a promise of two years of Android OS upgrades. It's still a bit disappointing to not have Android 12 out of the gate, which is what most manufacturers are offering these days. My unit was running the May 2022 Android security patch. Even though the UI is mostly clean, I did find apps such as ExpressVPN, LinkedIn, Netflix, and Spotify preinstalled. These apps can be uninstalled to reclaim space.

The Nokia G21 offers various gestures to help get things done quickly. For instance, you can perform a double-tap gesture to wake the screen, flip the the phone over to reject calls, double-tap the power button to launch the camera, and a few more. It also has stock Android features such as Digital Wellbeing which gives you a nice insight about your usage habits.

The Nokia G21 offers acceptable performance for the price. It was capable of handling casual games and mainstream apps without any hiccups. However, more demanding apps and games did require a longer time to load. A basic level of multitasking was possible on the 6GB RAM variant that I had but there was no RAM extension feature which could come in handy for the 4GB variant. The side-mounted fingerprint scanner was quick at authentication. The quality of the HD+ resolution display was pretty average too. This could be a deal breaker for some since full-HD+ displays aren't uncommon in this segment.

Benchmarks scores echoed my usage experience. In AnTuTu, the Nokia G21 scored just 198,068 points, while in Geekbench 5, it managed 306 points and 1221 points in the benchmark's single-core and multi-core tests, respectively. In graphics benchmark GFXBench, it managed 34fps and 8.8fps in the T-Rex and Car Chase test suites. These scores were in line with other budget smartphones, such as the Redmi 10 Prime (Review) and the Samsung Galaxy F22 (Review) that are also available in this price range.

The Nokia G21 has a triple-camera setup on the back

Gaming performance on the Nokia G21 in games such as Call of Duty: Mobile was strictly average. It defaulted to the ‘Low' graphics and ‘Medium' frame rate setting. The game took some time to load and I did observe occasional issues with rendering objects within the game, in certain maps. I played the game for about 15 minutes which resulted in a mere two percent drop in battery level, which was good. The phone did get slightly warm to the touch at the end of my gaming session.

Battery life is where the Nokia G21 excels. The frugal SoC and the large battery allows it to easily hit the two-day mark, at least with my typical usage. In our HD video loop test, the Nokia G21 ran for 20 hours and 4 minutes, which is a very good time. Sadly, the slow charging speeds of the bundled 10W charger resulted in the phone charging to just 23 percent in half and hour and up to 45 percent in an hour. Charging the battery fully took over two hours. I feel it would be worth investing in a faster 18W charger to reduce charging time.

Daylight photos from the primary camera looked good when viewed simply on the phone's display, but I noticed that details weren't as sharp upon zooming in. Textures and details on objects at a distance in landscape shots tended to have a watercolour-like effect. The phone was quick to enable HDR in bright scenes which helped the phone capture decent dynamic range.

Close-up shots were surprisingly good with well defined edges and crisp details. Shots captured with Portrait mode weren't as good as the phone was slow to capture the image, taking four to five seconds each time. As a result, clicking photos of pets was tough, and needed multiple attempts to get a proper shot. Still objects fared better. Macros photos from the dedicated camera had mediocre details.

Low-light camera performance was strictly average. Objects were recognisable but the photos did lack detail in the darker areas of the frame. Night mode helped deliver a brighter image with better details but it took over six seconds to take a shot, during which I had to stay still to avoid any blur in the output.

Selfies were decent in both daylight as well as low-light conditions. Those clicked in Portrait mode had good edge detection and managed to blur the background properly.

Video recording on the Nokia G21 maxed out at 1080p for the rear camera. It lacked stabilisation resulting in shaky footage. Overall, the camera performance of the G21 was strictly average, and an ultra-wide-angle camera might have brought some versatility to this otherwise mediocre setup.

The Nokia G21 is an Android One smartphone that provides a stock Android experience, with the promise of guaranteed software updates for the next few years. It offers good build quality and excellent battery life for day to day usage. Given its good qualities, the Nokia G21 should appeal to a casual user who prefers a simple and clean Android interface. Having said that, I'm a little disappointed that the G21 ships with Android 11 and not 12. Power users might find the Nokia G21 to be slightly underpowered. The cameras also fell short of my expectations.

If you can overlook its shortcomings, the Nokia G21 is still a dependable smartphone for casual use with good software support, which isn't common in this price range. Those wanting more performance around the same price can consider the Realme 9i (Review) or the Moto G51 (Review). If you are eyeing the 6GB variant of the Nokia G21, you should consider the Redmi Note 10T 5G (Review) instead.