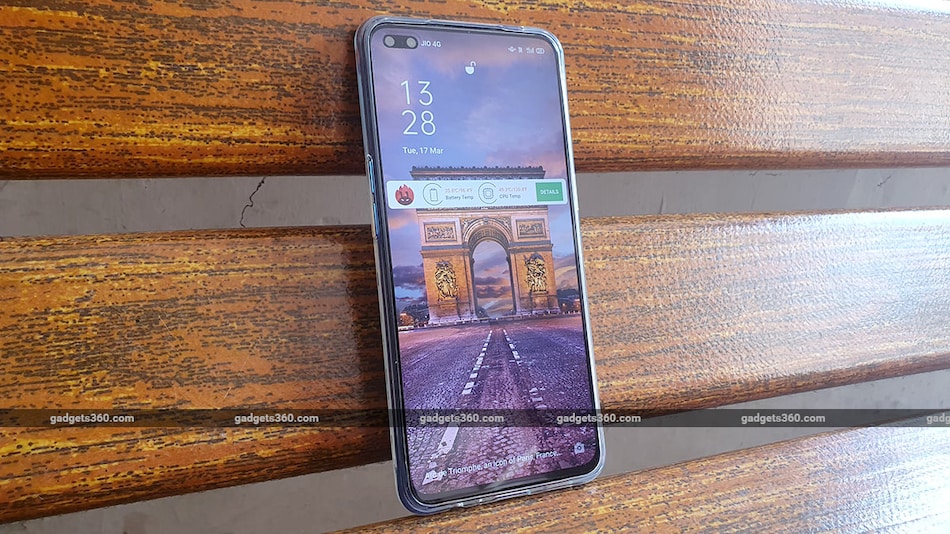 The Oppo Reno 3 Pro was launched in China late last year as a 5G enabled smartphone. Right after the China launch, we saw multiple rumours hinting that this smartphone would soon come to India, but then it seemed as though the Reno 3 Pro making its way to India would be a completely different device that only shares a name with its Chinese equivalent. Oppo finally took the wraps off the Reno 3 Pro earlier this month, and sure enough, a lot of these rumours have been confirmed.

Oppo's Indian version of the Reno 3 Pro lacks 5G, but is the first smartphone to use the Mediatek Helio P95 SoC. In fact, this SoC was launched just ahead of the smartphone. That's not all, the Reno 3 Pro also packs a 44-megapixel selfie camera and front depth sensor embedded into the display. With prices starting at Rs. 29,990, this phone goes up against the likes of the Realme X2 Pro (Review). Should you buy the Reno 3 Pro? We review it to find out.

The Oppo Reno 3 Pro launched in China has a curved-edge display and a single centred hole-punch camera similar to Samsung's designs. However, the Oppo Reno 3 Pro launched in India features a flat panel with a dual hole-punch for the selfie cameras in the top left corner. The Reno 3 Pro has thin bezels on three sides of the screen while the chin is thicker. It also has an in-display fingerprint scanner, something we would expect from a smartphone at this price.

Oppo has positioned the earpiece just below the frame of the smartphone. The frame feels plasticky to the touch and does not get cold in an air-conditioned room. The back also had the same feel and that doesn't inspire much confidence, as other devices in this price range use premium materials. All the buttons on the Reno 3 Pro are well-positioned and easy to reach while holding the device in one hand. The SIM tray is on the left of the device and it can hold two Nano-SIMs along with a microSD card.

The Reno 3 Pro has a quad-camera setup

We found the finish of our unit to be a fingerprint magnet. We would recommend that you use the clear case that Oppo bundles in the box. The company also ships the Oppo Reno 3 Pro with a 30W VOOC Flash Charge 4.0 charger for fast charging.

Oppo Reno 3 Pro has a big 6.4-inch AMOLED display with a full-HD+ resolution. Colour output is good and you can tweak the colour temperature. We also found it bright enough to be used outdoors. The display is tall, and reaching the upper edge isn't very easy when using the phone single-handed. Oppo has also added an in-display fingerprint scanner under the panel.

Powering the smartphone is the brand-spanking-new Mediatek Helio P95 SoC, an octa-core processor clocked at 2.2GHz, paired with 8GB of RAM. The smartphone is available in two storage variants, 128GB and 256GB. You do have the option to expand storage using a microSD card. The base variant is priced at Rs. 29,990 while the higher variant is priced at Rs. 32,990. Oppo currently only has the base variant on sale in India and is expected to bring the 256GB variant here later.

Connectivity options on the Oppo Reno 3 Pro include Bluetooth 5, Wi-Fi, and five navigation systems. The Oppo Reno 3 Pro has two Nano-SIM slots with support for 4G as well as VoLTE. The phone also packs in a 4025mAh battery and supports VOOC Flash Charge 4.0.

It ships with Android 10 out of the box

The Oppo Reno 3 Pro runs ColorOS 7 on top of Android 10 and our review unit was running the March security patch. The UI is clean and easy to use, with several useful features. Swiping right from the homescreen takes you to the Smart Assistant tab. The smart sidebar has shortcuts to let you capture screenshots and begin screen recording, among other things, and is quite handy. You can use on-screen buttons for navigation or switch to swipe gestures.

Smart driving and riding modes can help reduce distraction by blocking notifications and incoming calls. You can tweak the driving mode so that calls from specific people are automatically answered and routed to the loudspeaker. Digital Wellbeing helps you monitor the time you spend on the device, and includes wind-down and focus mode. To protect personal information, Oppo can show dummy information to apps that ask for access to your contacts and messages.

Just like other Oppo and Realme smartphones, the Reno 3 Pro recommended that we download more apps while setting the device up. We did not install any of these, and in spite of that the Reno 3 Pro still had a fair amount of bloatware. Some apps push spammy notifications when launched, and we would recommend disabling the ones you don't find useful.

Oppo also preinstalls its Soloop Video Editor on the Reno 3 Pro, which makes it convenient to edit videos for social media platforms.Game Space lets you block notifications while gaming and use both mobile data as well as Wi-Fi to improve online games.

Since the Oppo Reno 3 Pro is the first smartphone with the MediaTek Helio P95 SoC we were curious to see how it performs. It managed to deliver good performance without any stuttering or lag. Since our unit had 8GB of RAM we did not face any bottlenecks while multitasking. However, the phone did not feel as fast as some of the other phones we have used in this price bracket, such as the Realme X2 Pro.

We put the Reno 3 Pro through benchmarks to see how this new phone stacks up. First, we ran AnTuTu Benchmarks, in which it scored 225,538 points which is significantly lower than the 459,562 points that the Realme X2 Pro managed. In Geekbench 5's single-core and multi-core tests, the Reno 3 Pro scored 401 and 1,519 points respectively. This smartphone also managed 47fps and 7.9fps in GFXBench's T-Rex and Car Chase tests respectively. These scores are lower than those of the Realme 6, which we recently reviewed and which costs half as much as the Reno 3 Pro. Clearly, performance isn't the strongest attribute of the Reno 3 Pro.

We played PUBG Mobile on the device and it defaulted to the high settings with graphics set to HD and frame rate set to high. The game was playable without any lag or stutter. We played the game for 20 minutes and the device barely got warm to the touch. You should be able to play for long durations on this device without it feeling uncomfortable.

The Reno 3 Pro packs in a 4025mAh battery which is capable of delivering about a day and a half worth of usage from a single charge. In our HD video loop test, the smartphone managed to clock 18 hours and 12 minutes, which is a good score. Using the supplied 30W charger, we were able to charge the device up to 68 percent in 30 minutes, and fully in about an hour.

Premium Oppo smartphones are known for their camera performance, and we were expecting the Oppo Reno 3 Pro to deliver on this front. It packs in a quad-camera setup at the back consisting of a 64-megapixel primary sensor with an f/1.8 aperture, a 13-megapixel telephoto camera, an 8-megapixel ultra-wide-angle camera with a 119-degree field of view, and a 2-megapixel mono camera. The rear camera setup is capable of 5x hybrid zoom and 20x digital zoom. At the front, this phone has a 44-megapixel selfie shooter along with a 2-megapixel depth sensor. Oppo has been heavily advertising this as a “44-megapixel dual camera setup” on the Reno 3 Pro.

The camera app on the Oppo Reno 3 Pro has Night, Portrait, Time-Lapse, Pano and Slo-Mo modes. It has quick toggles for HDR and Dazzle Colour (which bumps up contrast) and shortcuts for different filters that you can apply before taking a shot. AI Scene recognition is on by default and it was quick to detect what we were shooting. You can also take macros using the ultra-wide-angle camera as it has autofocus.

Photos taken in daylight had good amounts of detail, and text at a distance was legible on zooming in. We also liked the dynamic range of shots captured in daylight. The wide-angle-camera helps capture a wider field of view but there is a considerable drop in quality when compared to the primary camera. Shots taken with the telephoto camera were sharpened which was visible on zooming into the image. 5x hybrid zoom offers decent details too.

Close-ups shot with the Oppo Reno 3 Pro turned out quite well and the smartphone manages to lock focus very quickly. Portraits also looked good, and the phone managed good edge detection. It also lets you set the level of blur before you take the shot.

Photos taken in low light had decent quality but you will notice grain on zooming in. The wide-angle camera offers a wider view but at the cost of detail. The night mode on the Oppo Reno 3 Pro produces brighter images with better details.

The Oppo Reno 3 Pro captures good selfies but these weren't as detailed as what we've seen from some of the other phones we've tested. Beautification is enabled by default, but you do have the option to turn it off completely. You can also shoot selfie portraits thanks to the secondary front camera. The Reno 3 Pro managed good edge detection and blurred out backgrounds correctly. We noticed some lag in the viewfinder before taking shots.

Video recording maxes out at 4K for the primary camera while the selfie shooter is restricted to 1080p. You do have the option to shoot using the different cameras and can also switch while a video is being recorded. Video taken in daylight was well stabilised at 1080p, however 4K footage wasn't stabilised. In low light, we noticed a slight shimmer effect in the output. There is a super-steady mode as well which stabilises video better, but we noticed a focus hopping issue in low light.

The sub-Rs.30,000 segment has been buzzing for a while now, not only because of new launches but also from high-end devices that have gotten price cuts. This segment is slowly getting competitive again, with value-for-money options such as the Realme X2 Pro (Review) which not only packs a powerful Snapdragon 855+ but also has a 90Hz panel. The Asus 6Z (Review) is another device which has a Snapdragon 855 SoC and is now available for under Rs. 30,000.

In comparison, the Oppo Reno 3 Pro does not offer the same kind of performance. Its relatively weak processor is evident in our benchmarks. However, it isn't terrible for everyday use, and if you aren't a power user, you won't really notice the difference. Camera performance is decent for the price, but this phone could do with a few tweaks to improve video quality in low light. You can consider the Reno 3 Pro for its camera capabilities, but if you are looking for the maximum value for your money, the Realme X2 Pro should be your pick.